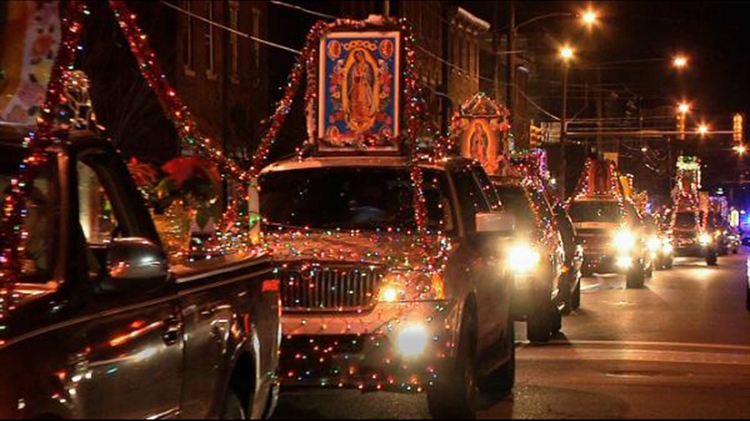 A new book, co-authored by Catherine Rhodes, assistant professor of Anthropology at The University of New Mexico, examines a town that saw a 1,000-plus percent increase in Mexican residents, rising from less than 1 percent of the population to almost a third.

The book, titled Migration Narratives: Diverging Stories in Schools, Churches, and Civic Institutions (Bloomsbury Academic, 2020), is based on more than 13 years of collaborative research between Rhodes and co-authors Stanton Wortham of Boston College, Briana Nichols at the University of Pennsylvania, and Katherine Clonan-Roy at Cleveland State University. The book is open access and available for anyone to read.

The book vividly illustrates the complexities that migrants and hosts experience, and it suggests ways in which policy-makers, researchers, educators, and communities can respond to politically-motivated stories that oversimplify migration across the contemporary world.

So Rhodes and her co-authors set out to find what’s actually happening in the lives of immigrants and the communities where they live.

“[Each Mexican migrant] is a fellow human being … They are coming to the country for a real need, to provide for their children and their family. They are not trying to get one over on us. I see good, hard-working people trying to make a better life for their kids just like my grandparents and some people’s great-grandparents … My grandfather and grandmother were both from Ireland, and my grandfather would say how it would be nice to go back to Ireland someday. My grandmother would say “You can go back, but I won’t.” … [Like my grandparents, the Mexican migrants are likely to stay in the US and not go back to Mexico] because their children and wives are here … While some do go back, the vast majority stay. Some move out of Marshall, but since I’ve been here it has been more permanent as well. They get jobs and some open their own businesses, so they won’t just up and leave. (Father Kelly of St. Joseph’s parish)”

This town they call Marshall was shaped by five groups of migrants over its 200-year history, Rhodes and her co-authors note in the book. English, Irish, Italian, African-American, and Mexican migrants moved to the town in large numbers, and many of their descendants remained and continued to influence its path.

Mexicans have been the most recent migrant group, with a rapid increase starting in 1995. The population of the Mexican community increased from about 100 in 1990 to just under 10,000 in 2016. By 2016, Mexicans, together with a few other migrants from Latin America, comprised almost a third of the town’s population, and their children were approaching a majority in half of the town’s elementary schools.

“I think Hispanics are coming here to get a better life also, same thing my parents did—came here for a better life from down South. The only difference is that it’s not that much difference for real, ’cause when they came here, years ago, they used to do the same thing—have a lot of people in the house, know what I mean? And then, as they got older, people trickled out and moved to different houses … the same thing the Spanish [speakers] are doing, for real. Come to think of it, like you said, they got all the people in the house, they all live there, so they can get a better life, have what they want, you know what I mean? And that’s the same thing our people did when they came here.”

“We documented the relationships between earlier and more recent migrants to the town, focusing on how experiences of and stories about migration unfold across institutional spaces—residential neighborhoods, politics, businesses, public spaces, churches, schools, and community organizations,” Rhodes explained. “A key focus is how inter-ethnic relations played a central role in newcomers’ pathways. The town described is similar to communities across the U.S. and around the world that have received large numbers of immigrants in a short time. The book illustrates the complexities that migrants and hosts experience and suggests how policy-makers, researchers, educators, and communities can respond to politically-motivated stories that oversimplify migration across the contemporary world.”

The book shows how the Black, Italian, Irish, and Mexican communities engaged with each other, showing that the trajectories of individuals and of the town vary quite a bit depending on which institution is being considered: the church, the neighborhood, businesses, or politics.

“And we show how it is that you have to trace the pathways of individuals and communities in their particular circumstances to understand what’s really happening. We also systematically study the stories of immigration, invasion, or victimization that are told in this town as in others,” she said.

In order to make sense of contemporary migration, Rhodes added, we need to take a much more careful look at the variable circumstances the diverse pathways that migrants and host communities are traveling and understand how the stories that people tell about migration, including politically motivated ones, have a causal effect and shape people’s experiences too.

Rhodes noted that the town in which this ethnography took place represents similar communities across the United States and around the world that have received large numbers of immigrants in a short time. The book vividly illustrates the complexities that migrants and hosts experience, and it suggests ways in which policy-makers, researchers, educators, and communities can respond to politically-motivated stories that oversimplify migration across the contemporary world.

Related stories – Immigration: A look at the issues