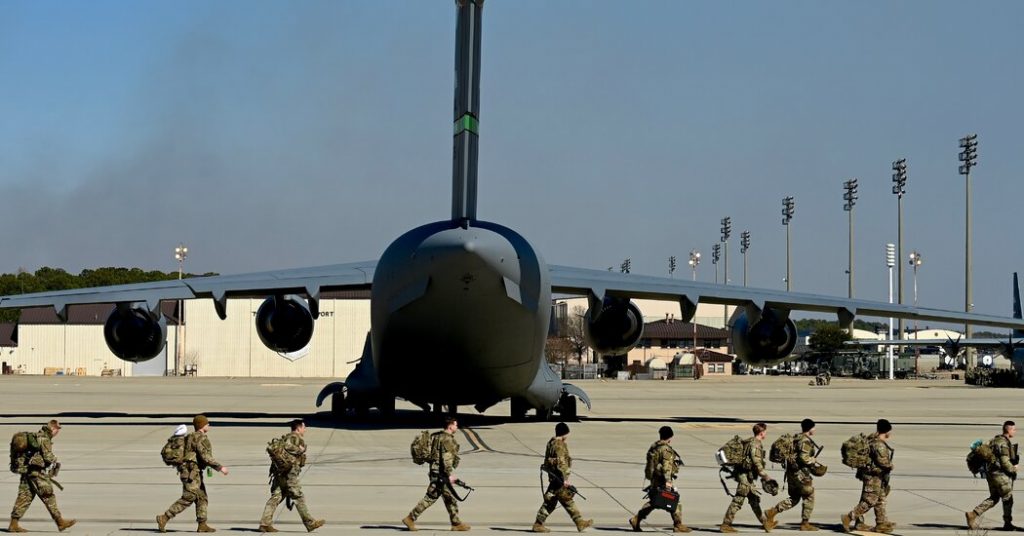 As their standoff over Ukraine continues, Moscow and Washington are playing an increasingly high-stakes, increasingly complex game of signaling to try to secure their aims without firing a shot.

Traditional diplomacy is just one component of this dance. Troop movements, sanctions warnings and legislation, embassy closures, leader summits, and intelligence leaks are all aimed, in part, at proving each country’s willingness to carry out certain threats or accept certain risks.

It is a form of high-stakes negotiation, conducted in actions as much as words, meant to settle the future of Europe just as conclusively as if decided by war, by telegraphing how a conflict would play out rather than waging it directly.

Russia, by shifting thousands of troops from its far east to Ukraine’s border, hopes to convince Washington and Kyiv that it is willing to endure a major war to secure its demands by force, so those countries are better off meeting Russian demands peacefully.

The Biden administration, by stating that a Russian invasion may be imminent, even closing its embassy in Kyiv, and vowing economic retaliation, signals that Moscow cannot expect desperate American concessions, making further escalation less worthwhile.

There have been a flurry of such gestures. Russia held Black Sea naval exercises, implying it could close off trade waters. President Biden issued joint statements with European leaders, conveying that they are not balking at American sanctions threats that would harm Europe, too.

But the more both sides try to make their threats credible, for example by relocating troops, the more they heighten the risk of a miscalculation that could careen out of control.

Each side also cultivates ambiguity about what it will or will not accept, and will or will not do, in hopes of forcing its adversary to prepare for all eventualities, spreading its energies thin.

The White House has said that President Vladimir V. Putin of Russia could decide this week whether to invade, deflating Moscow’s careful murkiness, while also demonstrating, especially to cautious Europeans, that any invasion would be driven by Russia, rather than in response to some outside provocation.

On Tuesday, Moscow moved to recreate confusion, withdrawing a handful of forces even as it continued nearby war games and as Mr. Putin accused Ukraine of genocide against its native Russophone minority. By feinting simultaneously toward de-escalation and invasion on Tuesday, Moscow builds pressure on the West to prepare for both.

“This dynamic is very volatile,” said Keren Yarhi-Milo, a Columbia University political scientist who studies how countries signal and maneuver amid crises.

A range of factors particular to this crisis, she added — differing political cultures, multiple audiences, rising uncertainty — “makes the signaling in this case very, very difficult.”

The result is a diplomatic cacophony nearly as difficult to navigate as war itself, with stakes just as high.

With their positioning, Moscow and Washington are struggling to resolve two outstanding questions about a possible conflict, each to their benefit.

Would a Russian invasion bring Moscow more reward than downside?

And, would the West have less tolerance than Russia for the pain of Mr. Biden’s proposed sanctions, and abandon them?

If Moscow can convince Washington that the answer to both is “yes,” then Mr. Biden and his allies would, in theory, be forced to conclude that they are better off delivering whatever concessions will keep Russia from launching a war.

But if Washington can persuade Moscow that both answers are “no,” then Mr. Putin will have every incentive to cut his losses and step back from the brink.

Mr. Putin has been ambiguous about what he would consider a successful invasion of Ukraine. And moves like his recent visit to China or his ambassadors’ bluster, shrugging off sanctions, signal that he is ready and able to bear the foreseeable costs.

Of course, if war were really so advantageous, it could have already begun, one of many hints that Mr. Putin may be partly bluffing, although by how much is impossible to say.

Mr. Biden, for his part, has sent weapons to Ukraine, a message that he would make any conflict more painful for Russia, and has laid out retaliatory sanctions in detail. He has implied Western unity over sanctions that may be just as much a bluff as Mr. Putin’s war talk.

His administration has also publicized what it says are Russian plans to fake a justification for war, implying that any such ploy would be quickly unmasked, making it less attractive.

But threats and bluffs work best when they are backed up by action, increasing the risk of a war that neither side may truly want.

And these efforts are complicated by each side’s need to persuade multiple audiences of contradictory things.

Mr. Biden must persuade Mr. Putin that Western sanctions would be automatic and severe, while also convincing Europeans, who would bear much of the cost, that sanctions would not hit them too hard or be carried out without their consent.

Similarly, Mr. Putin is seeking to position himself to Western leaders as ready for war, while convincing war-averse Russian citizens that he is being dragged into one, for example with false claims of American and Ukrainian aggression.

But Western leaders often struggle to differentiate which statements Mr. Putin intends them to take seriously and which he expects them to ignore as bluster for domestic consumption, Christopher Bort, a former U.S. intelligence official, warned in an essay for the Carnegie Endowment for International Peace.

The Kremlin’s “torrent of falsehoods” over Ukraine, Mr. Bort added, risks persuading Western leaders that Moscow’s diplomatic entrees can be ignored as cover for an invasion it has already decided to launch — potentially foreclosing an offramp from war.

“Your system is much more open than ours,” said Alexander Gabuev, a senior fellow at the Carnegie Moscow Center. “That produces a lot of misunderstanding.”

Because Kremlin decision-making is dominated by a handful of intelligence and military officials, Mr. Gabuev said, there is a tendency to assume that Washington operates the same way.

Offhand comments by American military officers are given special weight in Moscow, while lawmakers who drive much of Washington’s politics are ignored.

Understand the Escalating Tensions Over Ukraine

The Kremlin’s position. President Vladimir V. Putin of Russia, who has increasingly portrayed NATO’s eastward expansion as an existential threat to his country, said that Moscow’s growing military presence on the Ukrainian border was a response to Ukraine’s deepening partnership with the alliance.

Such cultural misunderstandings, Mr. Gabuev added, have become considerably worse in recent years, as Washington and Moscow have expelled one another’s diplomats and ended many unofficial exchanges, hampering their visibility into one another’s politics.

This is not always dangerous. Many in Moscow, assuming that Mr. Biden operates like Mr. Putin, believe that Washington has ginned up the appearance of conflict with the intention of declaring a false American victory when the more reasonable Mr. Putin rolls back the deployments he has insisted are defensive, Mr. Gabuev said.

That misunderstanding significantly eases Mr. Putin’s option to withdraw. And many in Russia view the West as the aggressor, and so would take an averted conflict as Mr. Putin triumphing, not surrendering.

Still, the less Washington and Moscow understand one another, the harder it will be for them to decipher each other’s signals and anticipate each other’s reactions.

“The Russian president’s circle of trust has consolidated over time, insulating him from information that does not fit with his prior beliefs,” the scholars Adam E. Casey and Seva Gunitsky wrote in Foreign Affairs.

As Mr. Putin’s inner circle has shrunk, they wrote, it has grown dominated by yes-men who tell him what they think he wants to hear and by security service leaders who tend to be hawkish and distrustful toward the West.

He would hardly be alone in this: research finds that strongmen leaders like him are, for just this reason, likelier to start wars and likelier to lose them.

So what Washington takes as Russian brinksmanship or bluffing, for example shrugging off sanctions threats or implying that some Ukrainians would welcome Russian liberators, may reflect sincere belief due to political dysfunction.

“Information flows to Putin are choppy at best, and sanctions are a highly technical topic that aren’t even well understood in Washington,” said Eddie Fishman, a top sanctions policy official in the Obama administration.

So far, both sides have avoided any obvious misreadings of each other. This may stem in part from the length of the crisis, which has allowed each capital to repeatedly telegraph its intentions and capabilities.

But that same factor — time — also creates more opportunities for a mistake as each side escalates.

“Every day that we’re not resolving it, we are increasing the percentage chance that something will go wrong,” said Dr. Yarhi-Milo, the international relations scholar.

“We’re testing the nerves of a lot of people at the same time,” she added. “It can take a really bad turn very quickly.”