Mexico sees easing in its third wave of COVID-19 cases 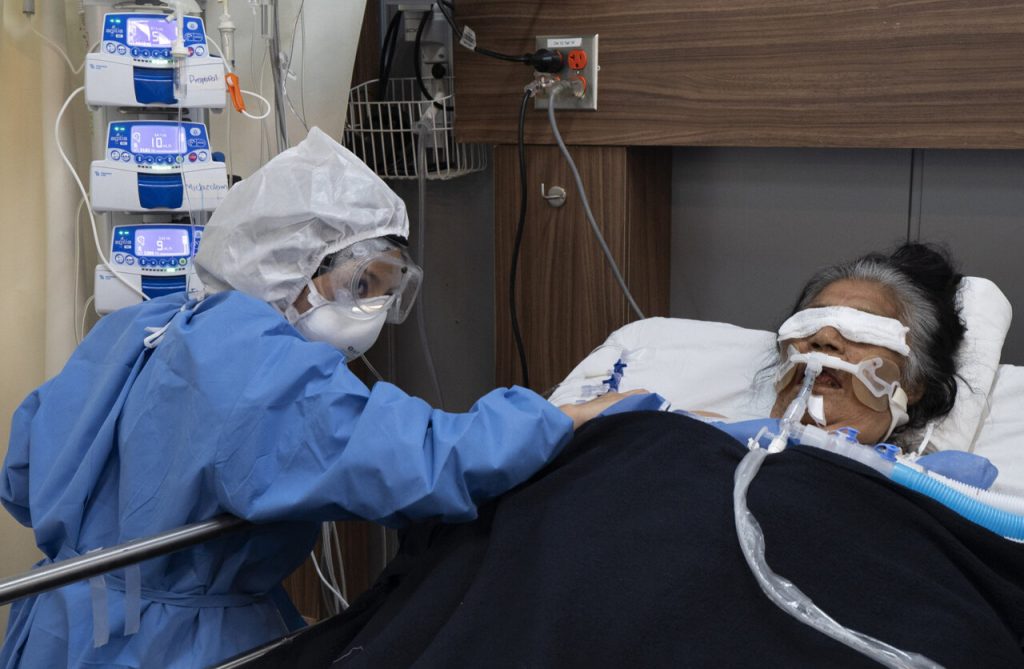 Israel Buendía sat up in the bed closest to the window, a machine forcing oxygen into his nose. He’d been at the Hospital Ajusco Medio for two weeks and now he was marveling at the sound of his own voice.

Just last Friday, Buendía had felt good too. He bathed, walked the hall a bit. Then he started to cough and couldn’t stop. By the afternoon, doctors had positioned him facedown in bed to ease his breathing. He spit blood.

“He was about to be intubated,” Dr. Susana Valdez, head of internal medicine, said this week.

Such is the roller coaster of COVID-19 for many patients. The pandemic has played out in similar peaks and valleys in Mexico over the past year and half. The country is now in the middle of its third wave of infections, a surge that began in mid-June and is just beginning to show signs of easing.

Ajusco Medio sits in a mountainside neighborhood on Mexico City’s south side. Designated early on to handle only COVID-19 patients, the public hospital has treated more than 62,000. On Tuesday, its intensive care unit was at 99% capacity. The 96-bed temporary hospital wing that it built in the hospital’s parking deck below the main tower was at 99.6% capacity, with one open bed.

There, bed after bed of COVID-19 patients were monitored by doctors and nurses, specialists and even a psychologist. Some waited for a bed in the tower to open, while others hoped they would never have to receive that higher-level care.

“There shouldn’t be tubes here,” hospital director Dr. Jesús Ortiz said during a walk through the UTAM. “The (UTAM) wasn’t made for more than high-flow points, however the aggressiveness of the (infection) curve beat us.”

Most of the patients now filling Ajusco Medio’s beds arrived in a wave two weeks ago or more. The staff was encouraged that this week new admissions had slowed. “It appears we are in the decline of the pandemic curve,” Ortiz said.

Still, patients were trickling in from other parts of the sprawling city and even other states, drawn by the hospital’s hard-earned reputation as a place where COVID-19 patients got better.

“The epidemic curve of estimated cases began to decline a month ago and today we have clear signs that it is in a process of reduction and we anticipate that that reduction is going to continue over the coming weeks,” he said during President Andrés Manuel López Obrador’s daily news conference.

Mexico has suffered more than 260,000 test-confirmed deaths from COVID-19. But because so little testing is done, official excess-death counts suggest the real toll is closer to 400,000.

A difference with this latest wave of infections was that Mexico’s vaccination campaign was well underway. So far, nearly 34 million people have been fully vaccinated and more than 23.8 million have been partially vaccinated.

Another difference this time is that hospitals like Ajusco Medio are seeing more children than they have in the previous waves. That appears to be due to the more contagious delta variant, which Ortiz said accounts for about 80% of the patients they have sampled.

The staff had grown accustomed to seeing long lines of adults waiting beside their outdoor triage area, but suddenly there were adults holding children by the hand, Ortiz said.

“We weren’t prepared for these children,” Ortiz said, noting that those cases were harder on the staff. “Now we can see 50, 60 children coming to the hospital to be evaluated in a shift.”

With Mexico’s return to in-person classes this week, there is concern that those numbers could swell in the coming weeks.

Dr. Cynthia Karina Portillo González, the hospital’s head of pediatrics, said they’ve seen children of all ages. Nearly all come after an adult in their home is infected, she said.

“We’re preparing ourselves,” Portillo said. “The number of patients will probably increase. We hope not.”

Portillo and Dr. Daniela Fernández were closely watching a 16-year-old girl who had arrived from another hospital a day earlier. She lay face down and motionless on a bed receiving high-flow oxygen through tubes in her nose.

Fernández said their pediatric load was three times what it had been. Motioning to the ward, she said that with the return to schools, “In two weeks we’re going to see this pretty full.”

Around lunchtime on Tuesday, Sergio del Río was pushed in a wheelchair to the entrance of the UTAM. He rang a bell mounted there for discharged patients while the staff applauded.

His wife Teresa arrived in a white SUV and when Sergio shuffled out the door they wrapped each other in a long embrace.

“I feel renewed,” Del Río said after 16 days in the hospital. “I arrived not being able to breathe and now, well, I wouldn’t run a marathon, but at least I could go down to the garage.”