Booster Mandates Are a Tough Call for States, Businesses 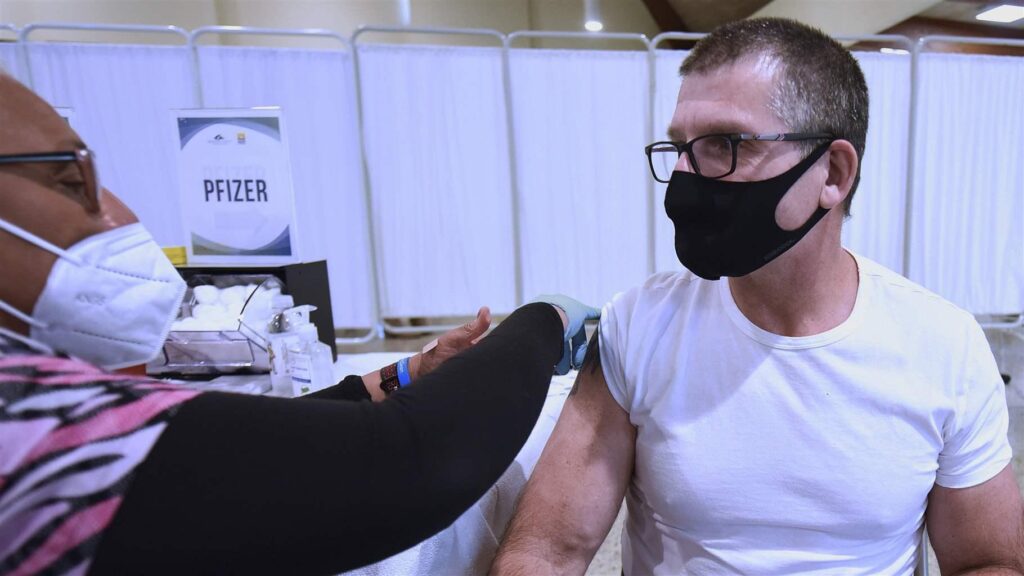 Read Stateline coverage of the economic effects of the COVID-19 pandemic.

Officials there cite recent state research showing that immunity from the first series of shots wanes over time, which corresponds with other studies from around the world.

“The evidence is incontrovertible,” said acting Health Secretary Dr. David Scrase. “Our data is telling us that more than two shots are needed to provide ongoing protection. If we feel like it’s going to save lives and protect people, we do have a bias for early action.”

But many other governments, employers and universities beyond New Mexico are struggling with whether to mandate boosters, leading to mixed messages to the public and a patchwork of policies across the country, even as COVID-19 cases see a winter surge.

More than a dozen universities, most of them in left-leaning states, have begun requiring booster shots for employees and students. But few if any states appear poised to add a booster requirement. And it’s unclear whether the federal vaccine rule mandating employers with more than 100 workers to require either vaccination or regular testing will expand beyond initial doses—if it’s upheld in court.

The debate over booster mandates is likely to heat up as health officials closely monitor the shots’ effectiveness against the fast-spreading omicron variant. And it illustrates the increasingly fragmented response as governors and other officials weigh which safety measures they’re willing to impose, nearly two years into the pandemic, and how much backlash they’re willing to incite.

‘We Are the Tip of the Spear’

New Mexico was among the fastest states getting people immunized when vaccines became available earlier this year. Because a high percentage of residents were vaccinated early, Scrase said, the state has been one of the first to see indicators of fading immunity.

“As months went by, we had more and more people further from their vaccinations and more breakthrough cases,” he said. “We are the tip of the spear for more vaccine breakthrough.”

An analysis conducted by state health officials in mid-November found that New Mexico residents vaccinated prior to June 1 were four times more likely to contract COVID-19 than those vaccinated after June 1—clear evidence that waning immunity, not just the delta variant, was driving the spike in cases.


On Dec. 2, New Mexico officials issued orders requiring employees under existing vaccine mandates to get booster shots, effective Jan. 17. Workers will need a booster within seven months of their second Pfizer or Moderna dose, or within three months of their Johnson & Johnson shot. State employees and school workers still will have the option to submit to weekly testing instead of vaccination.

Scrase said the state’s initial vaccine mandate in August drew some vocal pushback, but employees overwhelmingly complied instead of leaving their jobs. He said there’s little fear that adding a booster requirement will disrupt the workforce.

“We don’t anticipate expanding that [vaccine] requirement to include the booster shot, although I would say that we are getting a very, very good response,” Hawaii Gov. David Ige, a Democrat, told Stateline at the Western Governors’ Association winter meeting in San Diego last week.

More than a dozen universities have begun requiring boosters, including several in Massachusetts. The University of Massachusetts Amherst announced a booster mandate for faculty and staff earlier this month.

“We believe the boosters are among the most effective steps we can take to prevent the spread of COVID, omicron and other variants,” said Jeff Hescock, the school’s executive director of environmental health and safety.

Hescock said the school has had strong compliance with its initial vaccine requirement. With on-site vaccine clinics conducted by the university’s College of Nursing, UMass Amherst is well-positioned to supply booster shots to everyone under its mandate.

“I anticipate [booster shot mandates] becoming an annual thing, such as individuals getting their flu shots,” Hescock said. “It’s going to be key to our success moving forward.”

Several other schools have rolled out booster mandates in recent weeks, including Syracuse University and the University of Notre Dame. But many other universities, particularly in red states, have dropped vaccine requirements altogether, citing legal challenges to the federal mandate.

At least one hospital in New Jersey is requiring boosters for staff who received the Johnson & Johnson vaccine, citing waning immunity. And U.S. Department of Defense officials have acknowledged they’re considering a booster mandate for service members.


Still, many employers remain hesitant to require another shot. United Airlines, which was the first major airline to require its workers to get vaccinated, does not currently plan to mandate the booster, CEO Scott Kirby said earlier this month.

Govind Persad, an assistant professor at the University of Denver Sturm College of Law and a Greenwall Foundation Faculty Scholar in bioethics, authored a Washington Post opinion piece last month arguing that booster shots should not be a condition of employment. But the emergence of omicron could change that calculus, he said in an interview.

“Before this new variant, it didn’t make sense to me to mandate boosters,” Persad said. “But if it looks like the difference in benefit is really large, it’s likely to make the case for requiring boosters much stronger.”

Private employers are on solid footing if they choose to issue a booster requirement, said Scott Oswald, managing principal of the Employment Law Group, which specializes in workplace issues.

“It’s very clear that our regulatory agencies are going to give a wide berth to employers to institute these mandates,” he said. “It really comes down to what an employer believes is necessary to protect the safety of their workers.”

Still, he said, business leaders should make sure their region has enough available shots to allow workers to comply.

But many conservative states have passed laws to ban private businesses and local governments from requiring vaccination, creating conflicts with the federal vaccine rule and confusion for employers.

States on the Sidelines

Outside of New Mexico, governors thus far are not mandating boosters, even in blue states that have had more pandemic restrictions.

Oregon Gov. Kate Brown, a Democrat, told Stateline she currently has no intention of requiring boosters for state employees, educators or health care workers. Colorado Gov. Jared Polis, a Democrat, did not answer directly when asked the same question, saying only that the state would “encourage people to contextualize this as a three-course vaccine.”

And spokespersons for Washington Gov. Jay Inslee and Connecticut Gov. Ned Lamont, both Democrats, said they were not currently planning to add a booster requirement to state vaccine mandates.

Lamont’s response is notable, because he said last month that residents who received their shots more than six months ago should not consider themselves “fully vaccinated” until they get a booster. New Mexico Gov. Michelle Lujan Grisham, a Democrat, made similar comments just weeks before she announced the state’s booster mandate.


Minnesota Gov. Tim Walz, a Democrat, had “no announcements to share” on the issue, a spokesperson said. Governors’ offices in California, Illinois, Maryland, Massachusetts and Nevada did not respond to requests for comment.

Many Republicans and even some Democrats, including Michigan Gov. Gretchen Whitmer and Kansas Gov. Laura Kelly, have expressed opposition to the federal vaccine mandate covering employers with more than 100 workers.

Some experts say the fierce opposition to lockdowns and mandates has made states wary to act.

“We’ve gone as far as we can on mandates,” said Dr. Paul Offit, director of the Vaccine Education Center at Children’s Hospital of Philadelphia. “A booster [mandate] is only going to make people more upset: ‘Now they’re telling me I’m not fully vaccinated.’”

Offit said if booster shots are mandated, that could put officials on the hook to require future boosters, which are likely as COVID-19 continues to evolve, but “it’s not plausible to have booster mandates forever.” Forcing workers to take another shot, he said, could make them feel like their leaders are moving the goalposts.

He added that the initial vaccination series is still providing strong protection against hospitalization and death. Unless that starts to change, he said, states should focus their efforts on reaching unvaccinated people and boosting vulnerable populations.

Leaders at all levels are carefully watching the federal government to see if it will add booster shots to its national vaccine mandate for businesses with more than 100 employees. The mandate is currently on hold as it’s locked in a legal battle that is expected to reach the Supreme Court.

The Occupational Safety and Health administration, which issued the vaccine rule, would be unlikely to add a booster mandate until the federal Centers for Disease Control and Prevention changes the definition of “fully vaccinated” to include the extra dose, said Jordan Barab. He served as OSHA’s deputy assistant secretary of labor during the Obama administration and now writes a blog about workplace safety issues.

“We’ve seen some preliminary evidence that everybody’s going to need a third dose if omicron becomes the dominant variant, but OSHA’s not going to get out ahead of the CDC on that,” he said. “This is all evolving science and policy, and it’s going to get complicated.”

Last week, Dr. Anthony Fauci, head of the National Institute of Allergy and Infectious Diseases, said, “it’s going be a matter of when, not if” the federal government modifies its definition of “fully vaccinated” to include booster shots.

Until the feds offer more hints about their booster approach, states and businesses will be on their own to determine what’s best for their workers.