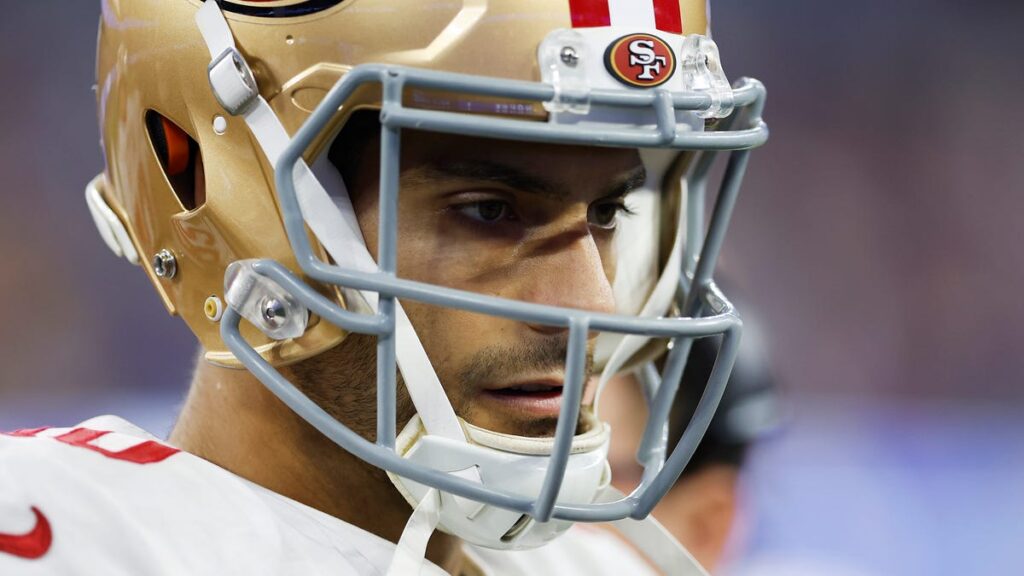 San Francisco 49ers’ quarterback Jimmy Garoppolo likely played his last game in a 49ers’ uniform this past Sunday. Despite winning eight of his last eleven games, Jimmy GQ will likely be traded away before the start of next season to make way for second-year quarterback and former third-overall pick Trey Lance. We don’t know where Garoppolo will land. All we know is that if a team is looking for a veteran quarterback, who has proven he can win games if plopped into a good situation, they are going to have to pay up. So, what exactly is Garoppolo worth?

When Garoppolo was traded to the 49ers from the New England Patriots, San Francisco parted ways with a second-round pick. Garoppolo had only started two games in his career prior to that trade. Now, he’s third all-time in 49ers’ franchise win percentage behind only Hall of Famers Joe Montana and Steve Young. He’s been to two NFC Championship Games and one Super Bowl as a starter, and with Brady and Roethlisberger now retired, Garoppolo is the only active quarterback with multiple Super Bowl rings. He’s a proven winner, great mentor, and all-around class act. So, while he may not be an elite talent at the quarterback position, he does hold tremendous value to a team that needs a small nudge to tip themselves over the edge into playoff contention. The first teams that come to mind are Denver, Carolina, Miami, and the New York Giants. We can also compare these teams with a team from a year ago that found themselves in a similar predicament: the Indianapolis Colts.

In August, the Philadelphia Eagles traded quarterback Carson Wentz to the Indianapolis Colts for a third-round pick and a conditional second-round pick — the condition being that if Wentz played 75 percent of the team’s offensive snaps, it would turn into a first-round pick. Personally, I like Jimmy Garoppolo a little bit more than Carson Wentz. Most people would consider the two quarterbacks very close to one another in terms of talent, although both display very different strengths and weaknesses. Still, despite the precedent of a potential first and third for Wentz having been set less than a year ago, several fans seem to believe that they can acquire Garoppolo for the same price the 49ers acquired him half a decade ago.

A third and a sixth, really? For a starting-caliber quarterback? Are you out of your damn mind? I’ll help you find it!

Based on what we’ve seen from the past, Garoppolo is more of a winner than Wentz was when he was traded, played in more games the season before being traded than Wentz did, and unlike Wentz, didn’t lead the league in interceptions this past season, and you mean to tell me that Garoppolo can’t be sold for anything better than a second or third? Blasphemy. Utter blasphemy.

Sure, some teams might be more skeptical of Garoppolo based on the underwhelming performance from Wentz this year, but there’s bound to be a GM desperate enough to make a big splash by trading a first-round pick and possibly more for Garoppolo. Perhaps a GM who’s on the hot seat for a bad trade he made for a quarterback a year ago, hmm? Scott Fitterer and Matt Rhule will likely both be on the hot seat heading into next season. This was a team that was supposed to be a dark-horse playoff contender. Instead, they finished last in their division after a 3-0 start. While their secondary and offensive line definitely need help, this is a team that no longer has to deal with Tom Brady. If Garoppolo can perform at a level even remotely close to what he did experienced in San Francisco, Garoppolo might have a case for the best quarterback in the division (especially if Matt Ryan is replaced in Atlanta).

This upcoming draft class is considered one of the weaker QB draft classes in recent memory. So, would you rather draft a quarterback with several flaws and hope for the best, or trade that pick for a quarterback who’s proven he’s capable of winning in the NFL? Garoppolo is a safer “prospect” than anyone in the upcoming draft class, and that’s why so many teams should be willing to give a little extra for a guy like Garoppolo.

If the 49ers aren’t offered any first-round selections, they can just…keep Garoppolo on the team. You think they’d be upset having him sit behind Trey Lance? A quarterback who got the team to two NFC Championship Games in three years and knows the system already? Yeah, that’s a devastating situation to be in. Yes, it hurts their cap situation and would likely stop them from extending key players like Laken Tomlinson, K’Waun Williams, and Raheem Mostert (yes, he’s still the best RB they have when healthy), but it’s not the end of the world. Tomlinson can be replaced by 2021 draftee Aaron Banks. Williams is a slot corner and the Niners could always just re-sign Jason Verett and hope he stays healthy. I love Mostert and think he elevates the Niners’ offense to a whole ‘nother level when healthy, but let’s not pretend that the 49ers can’t generate a solid run game with only Elijah Mitchell, Trey Sermon, and JaMycal Hasty.

The 49ers don’t have a first-round pick this year, and if they’re going to part ways with a quarterback like Garoppolo, especially given what other teams have parted ways with for similar talents, they better damn well recoup some of the value they lost in their trade with the Dolphins. A first-round pick shouldn’t be what the 49ers’ hope for by putting Jimmy G on the trade block. It should be the bare minimum. As long as they don’t feel pressured to trade him this offseason, the 49ers could be in for some tremendous value.