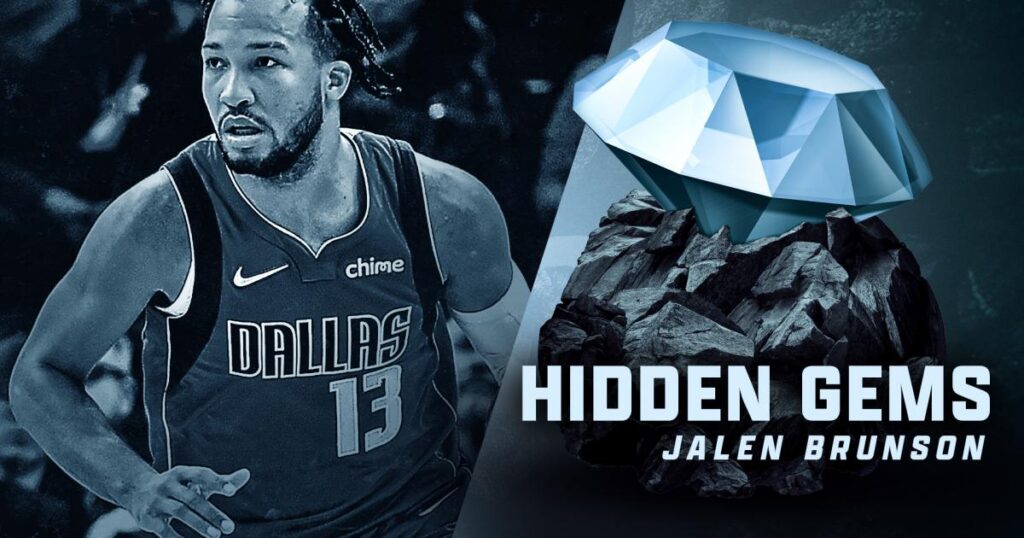 Jalen Brunson was considered by many to be the best backup point guard in the league over the past few seasons. Now, he’s proving that he might be much more than that.

Brunson has gotten a bit more attention this year with his shift into the starting lineup. In those 32 games, he’s averaging 17.8 points, 6.4 assists and 4.2 rebounds on solid efficiency. How is he scoring so much standing at just 6-1 and listed at 190 pounds? It might be surprising to hear that his game depends heavily on an intersection of physicality and craft.

“I like to play with contact,” Brunson told JJ Redick on ”The Old Man and The Three” podcast. “If I get contact, I can bump you off balance a little bit. I can either hesitate or in-and-out, or do something to get you off balance to either pull up, or go right by you. It’s something I learned. I had to. Bigger guys were always on me.”

You can see that physicality pretty much every time Brunson drives with the ball. He’s not the fastest or most athletic guy in the league, so he’s become adept at using moves such as the Barkley.

Named after Charles Barkley, the Barkley is a technique where, when a drive starting from the perimeter is cut off, a player backs down into the post to establish good position. Brunson may be small, but he’s stronger than he looks. Watch him Barkley against Jae Crowder, who is five inches and 45 pounds bigger.

When Brunson gets to that midrange area, he’s automatic. Per Cleaning the Glass, he has been right around the 90th percentile over the past two years at hitting those shots.

Brunson is also capable of getting to the rim off those post-ups, using extreme craft to get shots up. He plays like a big man, with an up-and-under move that would make Kevin McHale proud.

The other area where Brunson surprisingly excels is on his layup attempts. Guys his size aren’t supposed to be good finishers. Take Fred VanVleet, who at Brunson’s same height hits a shade over half his shots at the rim. Brunson hits 71 percent of his attempts, which is roughly the same as what 7-3 teammate Kristaps Porzingis makes.

Brunson’s forays toward the rim are a joy to watch. They bring me back to college dorm rooms 20 years ago, huddled around a Playstation 2 and mashing buttons on NBA Street.

Mikal Bridges will be in the conversation for Defensive Player of the Year this season. Brunson  made Bridges look completely lost when he broke out his kitchen sink of moves.

Brunson’s bag of tricks has made him a top 15ish isolation player by the efficiency numbers. That’s significantly better than Luka Doncic and in the same company as big-time scorers Ja Morant, Zach LaVine and Damian Lillard. He is probably capable of handling a higher load in a bigger role.

Brunson can score one-on-one, but he’s a team player too. He’s a very willing screener — the Mavs will have him lay wood deep in the backcourt to get Doncic switched onto smaller defenders. He’s also a good-if-unspectacular passer who can make all the reads.

That team-first mentality really shines through in Brunson’s help defense. He is almost always in the right spot. He applies pressure without over-helping by utilizing stunts and closing driving gaps with good positioning. He is extremely smart in knowing how to zone up the weak side of the floor and guard two players at once. His dad, Rick, played and coached in the NBA, and Jalen is a coach’s son through-and-through.

Brunson’s on-ball defense isn’t quite as good. He can stay solid and keep in front of his man, but his size does limit him. Bigger players will shoot right over him. Pick-and-roll defense also presents some issues because if he ever has to switch, he’s basically toast. He’s a one-position defender, and that is tough to pull off in today’s NBA.

Defensive limitations aside, Brunson is a good player with a chance to get even better with an expanded role. The fit with Doncic has been OK, but the Mavs have played significantly better by the numbers when only one of them is on the court at a time. Brunson is often relegated to off-ball roles with Doncic. While Brunson is an OK 3-point shooter, he’s better with the ball in his hands.

Brunson’s name is starting to heat up in trade rumors. He and his teammate, another Hidden Gem candidate in Dorian Finney-Smith, are about to get paid. They will test whether the Mavs are willing to go into the tax to keep both. If the answer is no, then Brunson might get shipped. He is reportedly seeking a contract that pays him $20 million annually, and he will be worth it.

Can Brunson keep up his success in a bigger role on a new team? It’s understandable to be skeptical of an undersized guard who doesn’t defend at an elite level and is a mediocre 3-point shooter, particularly the way the game is played today. But he’s proving that some things are timeless.

Brunson is an unusual player, which makes him tricky to evaluate unless you watch a lot of him. Bottom line, he impacts winning at a high level. He takes the road less traveled to get there, using Barkleys, hesitation dribbles, step-through floaters and wrong-footed layups along the way.