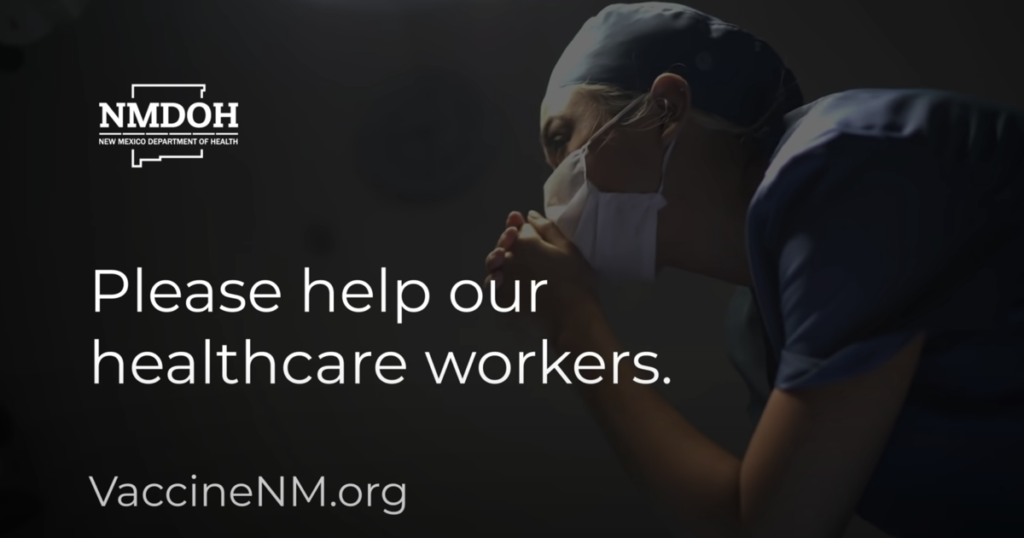 The commercial conveys a dire message about the coronavirus, with a hospital monitor beeping, two men in hospital beds getting oxygen and a voice-over warning about another surge.

An emotional nurse shakes her head.

“Hospitals are full. People are really sick,” the narrator intones. “Get tested. Get vaccinated. Get boosted. Please help our health care workers.”

Sending an effective message about the pandemic can save lives. And it can be big business. Albuquerque marketing and website design firm Real Time Solutions and its subcontractors will receive close to $50 million for advertising and other communications through about two years of the coronavirus pandemic, state records show.

The oft-played commercial recently cost the state Department of Health about $1.4 million for production and media placement, the state agency said. Real Time Solutions, which is credited for the commercial, has won praise from state officials for its work during the pandemic.

The Albuquerque-based company’s myriad tasks for the state include website development for COVID-19 testing, statistics, updates, vaccination registration and inventory tracking — plus commercial production — in the effort to communicate to the public through digital media, social networks, newspapers, television, radio and billboards.

Dr. David Scrase, acting secretary of the Department of Health, and others said they were pleased with Real Time Solutions’ efforts.

“I’m not an expert in marketing,” Scrase said last week in an interview. “But I’m happy with the messages I’ve seen.”

But success has not come without scrutiny. Real Time Solutions also was mentioned in a legislative report written last fall that questions state purchasing practices in emergencies like the pandemic, as well as the fact that advertising contracts in general don’t require competitive bidding in the state.

The report by the Legislative Finance Committee cited problems in the state’s procurement process for goods and services. It said the pandemic brought “more sole source and emergency procurements than ever before.”

It also noted much of the emergency spending “was under a $200 million blanket emergency procurement authorized by the Governor.” The Health Department received the majority of that, the report says, and while the emergency purchasing measures for this crisis were discontinued in mid-2021, some contracts and orders continued that were already in place.

Nora Meyers Sackett, spokeswoman for Gov. Michelle Lujan Grisham, wrote in an email message that “amid a once-in-a-lifetime pandemic, the collaboration between the state and Real Time Solutions saved New Mexican lives and was an integral part of our state’s nation-leading COVID-19 response.”

Real Time Solutions grated on some New Mexico advertising representatives when the company used Idea Peddler of Austin, Texas, as one of its subcontractors.

But Gallegos said how that heap of advertising money was distributed is a mystery to him.

“I would tell you a lot of people are wondering, like, how does that process work?” he said. “Where are the checks and balances there?”

Some in the advertising industry resented the contract with Idea Peddler. Jory Rosen, executive director of the American Advertising Federation-New Mexico, said he wasn’t familiar with the Idea Peddler situation but that he knows “too much work is going out of state” and added New Mexico has an excellent group of marketing and advertising firms.

Scrase said the state has price agreements with firms that can be utilized quickly in emergencies. That enabled Real Time Solution’s selection for urgent creation of websites and other elements to help track data and inform the public of masking and distancing recommendations.

Marisa Maez, a state spokeswoman, wrote in an email the Health Department contracted with Real Time Solutions for “multiple efforts” in rapid response to the COVID-19 crisis. A couple months later, the state expanded the company’s work to include marketing during the pandemic, she added.

As of early February, New Mexico was among the top 12-14 states (tied with Colorado and Oregon) in percentage of fully vaccinated residents, the Times’ vaccination tracking program said.

Maez said the money allocated to Real Time Solutions came from federal sources, including the Centers for Disease Control and Prevention.

“They’re working their tails off, I can tell you that,” she said.

Blackwell said the expenditure on Real Time Solutions and its subcontractors has been worth it.

“What is the cost of misinformation?” she asked. Her answer: lives, hospital resources, societal division and exhausted health care workers.

Chris Schroeder, chief operating officer for Real Time Solutions, said the company is “extremely proud” of its contributions to the state’s effort. He wrote in an email the Albuquerque-based company “worked tirelessly to support the state in ensuring New Mexicans’ safety and welfare.”

Schroeder said Real Time Solutions has provided website assistance and other services for the Department of Health for more than 20 years and has established a solid track record. He said the company has a statewide pricing agreement that saves state and local governments money and doesn’t require a request for proposals when services are needed.

“The Legislature has been concerned about procurement for a while,” Fischer said in an interview. “And advertising for a long time has been exempt from the procurement code.”

State Sen. Bill Tallman, D-Albuquerque, introduced legislation in the current 30-day session to address some of the purchasing and procurement issues. But he said Senate Bill 114 won’t advance in this short session, though he will introduce it again next year during the 60-day session.

Schroeder said his company has both a state price agreement and an agreement with the federal General Services Administration. “These established procurement agreements are a benefit to taxpayers and save governments significant amounts of money,” he wrote.

Schroeder wrote he “put together a team of professionals that I trust and knew could deliver for the State of New Mexico.” He said besides Idea Peddler, he also subcontracted with Albuquerque-based firm Lavendr as well as Momentum Santa Fe.

He declined to say how much money the subcontractors received, and Idea Peddler referred questions to Schroeder.

Schroeder said Idea Peddler doesn’t have a New Mexico office but is registered with the state’s Taxation and Revenue Department for tax purposes.

Gallegos, of the state advertising federation, said New Mexico firms “really want to encourage a competitive process.” He said he wants to know how ad agencies in the state can compete fairly.

Blackwell said the Department of Health assembled an advisory committee for health care marketing that aims to promote “unified, clear messaging” about the pandemic, vaccinations and other things. The committee meets by Zoom weekly for 45 minutes and has functioned so well that it intends to work on other public service projects, she said, such as mental health.

Blackwell said of the money that went to Real Time Solutions and its subcontractors, it’s “no small effort” to create websites, vaccination registration portals, text messaging services and marketing.

“They truly are creating it and building it at the same time,” she said. Idea Peddler has done its part, too, she added.

“Austin or not,” she added, “they have served New Mexico really well.”