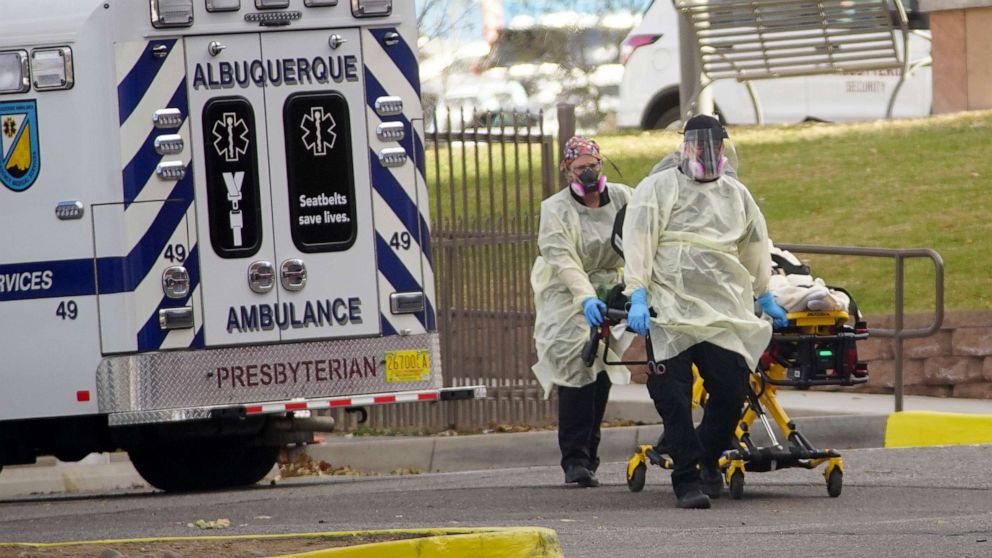 The two largest hospital systems in Albuquerque, New Mexico, have activated crisis standards of care due to an “unprecedented level” of activity during the pandemic, hospital officials announced Thursday.

University of New Mexico Health System and Presbyterian Healthcare Services leaders said in a joint press briefing that they have transitioned to crisis standards of care at their Albuquerque metro hospitals. The move comes as the hospitals are being stretched to the limit in terms of space and staffing due to increasing COVID-19 hospitalizations and a high volume of patients with acute conditions, officials said.

“Currently at UNM today, we’re operating at about 140% of our normal operating capacity, and I’ve had moments where we’ve approached 150%. This really is an unsustainable and unprecedented level of activity that we’ve been able to create,” Dr. Michael Richards, senior vice president for clinical affairs at UNM Health System, told reporters.

The decision means that nonessential medical procedures could be delayed by up to 90 days, and that patients may need to get treated at a different regional hospital, or possibly out of state, hospital officials said.

“We are not triaging and denying care,” said Dr. Jason Mitchell, the chief medical and clinical transformation officer for Presbyterian Healthcare Services. “The decision may be, we don’t have beds in our hospitals — who else can take this patient?”

The announcement comes less than a month after the state’s Department of Health announced a new public health order allowing health care facilities to transition to crisis standards of care amid a delta surge and a shortage of hospital staff. The state is averaging more than 1,450 daily cases and nearly 530 hospitalizations, up from fewer than 700 daily cases and 400 hospitalizations in early October, according to data from Johns Hopkins University.

The order creates a “more standardized and equitable procedure” for determining patient priority when resources are limited. Crisis standards of care were last implemented in the state nearly a year ago, in December 2020.

“Our hospital teams are really stretched thin, and we are seeing way more patients than they thought possible,” Dr. David Scrase, acting cabinet secretary of the state’s Department of Health, said during a press briefing Wednesday. “What it means is if one of the people watching this press conference has a heart attack right now, there’s a good chance that we won’t have an intensive care unit bed for that person here in New Mexico.”

Intensive care unit capacity has dipped into the single digits for the first time during the pandemic, Scrase said, as nearly every county in the state is experiencing high levels of transmission.

“Not very good news with hospitalizations,” he said, urging people to get vaccinated and booster shots and to follow safe COVID-19 practices. “This is a really serious time.”