How Colombia’s feminists decriminalised abortion – with help from their neighbours 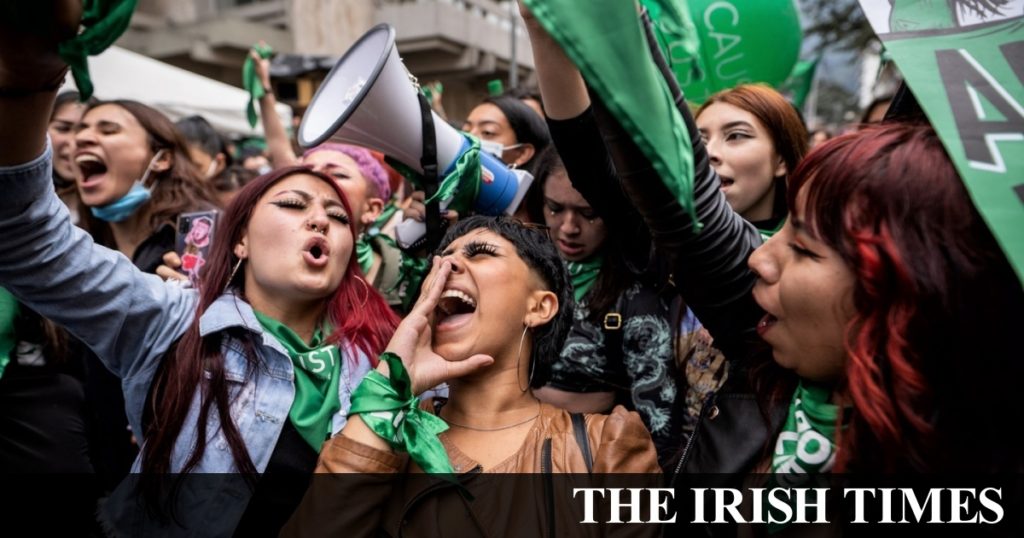 Decades of grassroots organising, with meetings in living rooms and in the streets, online and across borders, have produced a tectonic shift on abortion in Latin America, a historically conservative region where access to the procedure has long been severely limited.

In just over a year, Colombia has joined Mexico and Argentina in knocking down barriers to abortion. It’s all the more striking in contrast to the shift taking place in the United States, the country whose supreme court decision guaranteeing the right to abortion – Roe v Wade – had been a seminal spark for many activists in Latin America.

As the United States faces growing restrictions on abortion, feminist activists in Latin America are increasingly relying on one another for legal strategy, organising tactics and inspiration, pointing out that their counterparts to the north might have something to learn from them.

“It’s now an inspiration going south to north,” said Catalina Martínez Coral (37), a Colombian lawyer and member of Causa Justa, the coalition of abortion rights groups that brought the case recently considered by the Colombian court. “We are going to inspire people in the United States to defend the rights set out in Roe v Wade.”

As abortion rights advocates in Colombia prepared to make their case before the country’s highest court this year, they drew their tactics from their neighbours: they learned from lawyers in Mexico, adopted a song-and-dance performance similar to one in Chile and waved the green handkerchiefs that first emerged as a symbol of the movement in Argentina.

And when the country’s high court ruled in their favour on Monday, largely striking down a measure that made abortion a crime, they gathered outside the courthouse to celebrate and to thank those who had helped them make the moment possible: their partners across Latin America.

Abortion still has plenty of opponents in the region, including the Colombian president, Iván Duque, a conservative who condemned the ruling on Tuesday. “I am worried that abortion, which goes against life, will become a regular practice,” he told local media shortly after taking office. “And that in a machista country, people will resort to it, and for many it will become a contraceptive in place of the condom.”

But Colombian abortion rights activists insisted this week that the tactics they used to lobby for the decriminalisation of abortion would now be used by advocates across the region and beyond. “The whole world is watching us,” said Natalia Goyeneche (31), one of the many women by the court’s steps on Monday as the ruling was announced.

In Colombia, feminist activists’ call for abortion rights went mainstream over the past two years, as their counterparts won big in neighbouring countries. The origins of the movement, however, go back decades – at least to 1973, when a Colombian gynaecologist accepted an invitation to visit the United States just as the US supreme court ruled on Roe v Wade.

The doctor, Jorge Villarreal Mejía, had for years been horrified by the number of women he saw sick and dying from botched abortions in Colombian hospitals. In the United States, he toured some of the country’s earliest legal abortion clinics. And he returned to Colombia convinced that he had to replicate them.

He started a reproductive health clinic, Oriéntame, in the capital, Bogotá, in 1977. And the organisation in many ways helped pave the way for this week’s decision. Despite a law criminalising abortion, Oriéntame began to openly help hundreds of thousands of Colombian women who had already begun ending their pregnancies – explaining to authorities that it was helping women who were already suffering from failed or incomplete abortions.

Over the years, Oriéntame was frequently targeted by authorities who accused it of breaking the law, while vandals scrawled “assassins” outside the office. But tensions escalated in 1994, when police knocked down the clinic’s doors, guns drawn, and took off with patients’ records, beginning a legal process that lasted a decade and could have landed Villarreal in prison.

That was when Cristina Villarreal – Villareal’s daughter, who was taking over the clinic – decided they needed to go beyond providing medical help and begin uniting with feminist activists working to change the legal landscape in which they worked.

“It doesn’t make sense for us to continue on two different roads,” she recalls saying of activists and medical practitioners. “Now is the moment.”

Soon, Cristina Villarreal and others had formed La Mesa por la Vida y la Salud de las Mujeres, a coalition whose main goal was to eliminate the law criminalising abortion. For Colombia, she said, “this was totally, totally radical and revolutionary”.

This is a country, as you know, that has been beaten by conflict and war

But putting the issue on the public agenda was difficult, and not just because abortion was opposed by the powerful Catholic Church and most of the public. “This is a country, as you know, that has been beaten by conflict and war,” said Ana Cristina González Vélez (53), a co-founder of the organisation, adding, “That meant that for many years ending the conflict occupied the agendas of women’s groups.”

Pushing for legalisation of abortion through Colombia’s Congress seemed a dead end. More than a half-dozen attempts had failed when, around 2004, a Colombian lawyer named Mónica Roa approached the Mesa and proposed a new tactic.

Roa had recently returned from the United States, where she was working for a legal advocacy group called the Center for Reproductive Rights. She would go to the country’s constitutional court – famously more liberal than its Congress – and argue that the law criminalising abortion violated women’s rights to life, health and reproductive autonomy.

In 2006, she achieved a major victory for the movement when the court ruled that the country must allow abortions when a woman’s health was at risk, when a foetus had serious health problems or when a pregnancy resulted from rape.

Around 2016, the women devised a new strategy – one intended to change both the legal landscape and public opinion, with a strong public awareness component. As the Colombians worked, Argentine feminists began a campaign to push legalisation through Congress. Their effort included hundreds of thousands of women marching in the streets, united by an easily identifiable symbol: a green handkerchief.

Their use of scarves was itself inspired by an earlier generation of female activists, called the Madres de Plaza de Mayo, who wore white kerchiefs to protest at the kidnapping and killing of their children by the Argentine dictatorship.

Suddenly, public officials were being forced to declare a position on the topic, and green scarves began to appear on necks, backpacks and bicycles all over Bogotá

“Part of our strategy was: how do we change the conversation in the country; how do we put this on the public agenda?” said Martínez, one of the Colombian activists. “And that’s what we learned from the Argentines.”

In late 2019, Argentina’s Congress legalised abortion – and two months later, just as the pandemic was beginning, Colombia’s Causa Justa coalition was born. This time, it had campaigns on Twitter, TikTok, Instagram and Facebook, and marched across the country.

It had a radio campaign targeting areas with limited connectivity and a reggaeton song that women performed in the streets. They called on celebrities to openly support them.

Suddenly, public officials were being forced to declare a position on the topic, and green scarves began to appear on necks, backpacks and bicycles all over Bogotá. And in September 2020, a group of lawyers from Causa Justa – drawing on legal lessons from Canada – sent a petition to the constitutional court, arguing that in practice, the existence of a law criminalising abortion violated a woman’s “fundamental right” to voluntary termination of pregnancy under the exceptions laid out in 2006.

On Monday, judges voted 5-4 in their favour, decriminalising abortion up to 24 weeks. – This article originally appeared in The New York Times