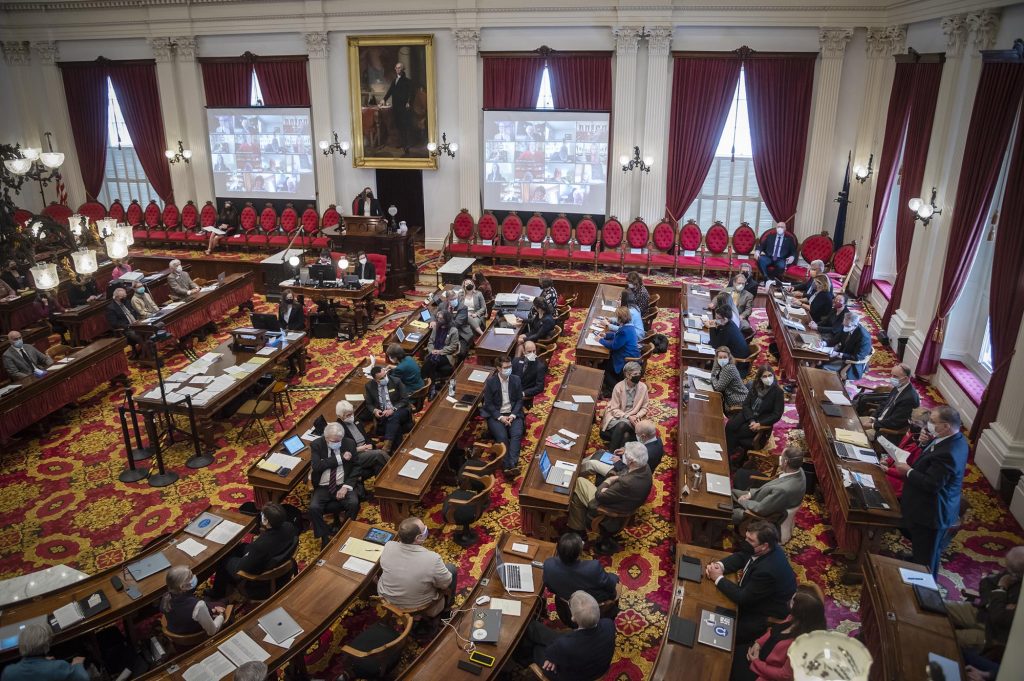 Those are the words of Don Stevens, chief of the Nulhegan Band of the Coosuk-Abenaki Nation, who spoke Tuesday in a hearing of the Vermont Senate Committee on Education.

Stevens was testifying on S.139, a bill that would bar schools from having a “name, symbol, or image” that refers to a Native American tribe, person, custom or tradition.

That bill was introduced last month, days after the Rutland School Board voted to reinstate the controversial former mascot of Rutland High School, the Rutland Raiders.

Stevens’ comments were echoed by Melody Walker Brook, a citizen of the Elnu Abenaki Tribe, in written testimony submitted to the committee.

“Change the mascot and teach students how to be responsible citizens in a world desperately in need of them,” Brook said. “As a person with a vested interest in this mascot debate, this mascot does not represent me.”

But neither Stevens nor Brook explicitly endorsed the bill, and Stevens noted that making schools retire mascots through the force of law could create even more backlash.

He called on lawmakers to provide more resources to schools for education about Abenaki history and culture.

“There has to be more than just you take away a mascot, or you add a mascot,” Stevens said. “I think there has to be education around why that is so wrong.”

On Tuesday morning, members of the Vermont Immunization Advisory Council convened for the first time in nearly two years.

The council, a group of state officials that makes recommendations about required vaccines for Vermont schoolchildren, was supposed to begin discussing whether or not to add the Covid-19 vaccine to the list of required shots.

“Clearly, this is a topic that should be discussed,” Health Commissioner Mark Levine said. “No question about it.”

But, asked for their thoughts at Tuesday’s meeting, neither the council nor members of the public weighed in on the pros or cons of a mandate — a sign that any action, if it does come, is still far away.

The third time could be the charm.

In recent years, Gov. Phil Scott has vetoed two bills that would have given victims of toxic chemical exposure the explicit right to sue the responsible companies for medical monitoring costs. Both times, Scott cited potential business impacts.

The Legislature is now poised to approve S.113, the latest version of the measure. Asked at the governor’s weekly press briefing about the bill, Scott appeared supportive.

“I don’t know all the details of it, but it looks much better than the bills previously on my desk,” he said.

The Senate Committee on Judiciary voted Tuesday in favor of S.166, which would enhance consumer protection against damage on private property caused by utility construction. The bill was introduced in response to an incident in which a subcontractor left wire in Tunbridge farm fields, eventually killing several cows and placing the farm’s future in jeopardy.

In testimony on Tuesday, representatives of the Vermont Electric Power Company, which manages electric transmission in the state, said it already has robust consumer protections in place. They said some parts of the bill would duplicate consumer protections.

“What I’m hearing is, essentially, that we should trust the status quo because it’s a system that’s robust enough at this point to handle these issues,” said Sen. Phil Baruth, D/P-Chittenden. “But that’s in conflict with the testimony that we have.”

Sen. Dick Sears, D-Bennington, who chairs the committee, agreed with Baruth and said a common problem in lawmaking is “when you hear all sides, you realize there’s seven sides, not just two.”

“I haven’t been convinced that there’s an easy path for citizens to get redress with some of these activities,” Sears said.

The bill appears likely to move next to the Senate Committee on Finance.

The $367 million budget adjustment bill passed the Senate on third reading Tuesday and is headed back to the House.

The measure already had enough Democratic and Progressive votes to clear the chamber, but a last-minute amendment drafted by Senate Appropriations Committee chair Jane Kitchel, D-Caledonia, got Republicans on board, as well. The final vote was 30-0.

Kitchel’s amendment tacitly responded to the criticism by noting that “substantial” state dollars must remain free to match some of the funding coming to Vermont in the trillion-dollar infrastructure package approved by Congress last year.

But it also offered Republicans an olive branch: If General Fund receipts continue to come in above expectations, it commits to switching out up to $25 million in ARPA funds for state dollars on certain line items.

Senators also agreed to tack on another amendment, sponsored by Sen. Chris Pearson, P/D-Chittenden, which would require projects worth $200,000 or more awarded under the bill and funded with ARPA funds to pay construction workers Vermont’s prevailing wage.

“My top priority this session is to use the historic federal stimulus and surplus state revenue dollars to improve the lives of working families in Vermont,” Balint wrote. “This bill delivers on that promise.”

The Vermont House on Tuesday gave preliminary approval to a $50 million tax cut package that would send $1,200 per child to most families with kids age 6 or under.

Proponents say H.510 is a progressive anti-poverty measure that also takes aim at Vermont’s demographic woes. Parents with young children are less likely to have higher incomes, and supporters point to research that suggests cash payments to low-income mothers could even positively impact brain development in babies.

“As many members in this chamber have said before me, our budgets and our tax code are reflections of our values,” Rep. Emilie Kornheiser, D/P-Brattleboro, who reported the bill on behalf of the House Ways and Means Committee, said to her colleagues on the floor. “By passing the Vermont Child Tax Credit, we’re communicating clearly and unequivocally here that Vermont cares about kids and families — that this is the place where you can make it work.”

The Vermont House on Tuesday approved Proposal 5, sending the question of whether to amend the state Constitution to guarantee sexual and reproductive freedoms to voters come November. The vote was 107-41.

Prop 5 would amend the state constitution to guarantee Vermonters access to abortion, contraceptives and other reproductive care. Having overcome the final legislative hurdle in a yearslong process, the final call now goes to voters in November. It’s expected to pass, with 70% of Vermonters supporting abortion access, according to Pew Research Center.

Proponents of the amendment say it’s an essential step as state legislatures around the country pass laws to roll back abortion access, and the future of federal abortion case precedent lies in the hands of a majority-conservative U.S. Supreme Court. A constitutional amendment would make it nearly impossible to roll back access in Vermont down the line, should the political tides of the state legislature change.

ON THE FIFTH FLOOR

For the second week in a row, Gov. Phil Scott spent most of his time at the top of his weekly Covid press conference discussing something other than Covid — in this case, his proposal to use $50 million of American Rescue Plan Act funding to build 100 cell towers across Vermont.

He said the benefits of the plan were “obvious” for economic development and public safety. “Since the American Rescue Plan passed, I’ve talked about the need for using one-time federal money for transformative, tangible initiatives. This plan does exactly that,” he said.

About 62% of Vermont highways have marginal cell service and 10% have none, according to June Tierney, commissioner of the Department of Public Service. Her department would perform a service study and consult communities to determine the best places to site new towers.

But Scott and Tierney said they couldn’t put a timeline on how long the plan could take, or whether 100 towers would be enough to cover all of Vermont, with Tierney saying only, “One hundred cell towers will significantly improve the state of coverage in Vermont.”

The Guardian published an opinion piece by Sen. Bernie Sanders, I-Vt., Tuesday, in which the senator urged the United States to do “everything possible” to avoid war in Ukraine. However, Sanders also cautioned that sanctions against Russia could cause “massive economic upheaval” and stymie international cooperation to combat climate change.

“To put it simply, even if Russia was not ruled by a corrupt authoritarian leader like Vladimir Putin, Russia, like the United States, would still have an interest in the security policies of its neighbors. Does anyone really believe that the United States would not have something to say if, for example, Mexico was to form a military alliance with a U.S. adversary?”

Tomorrow’s Statehouse cafeteria special will be Swedish meatballs over egg noodles. The grill section will serve up chicken parm sandwiches.

The centerpiece of Vermont’s new climate plan is a ‘clean heat standard.’ How would it work? (VTDigger)

Get Final Reading delivered to your inbox before it’s posted online. Sign up free!