In Mexico, an HIV-Positive Man’s Death Sparks Protests for Reform 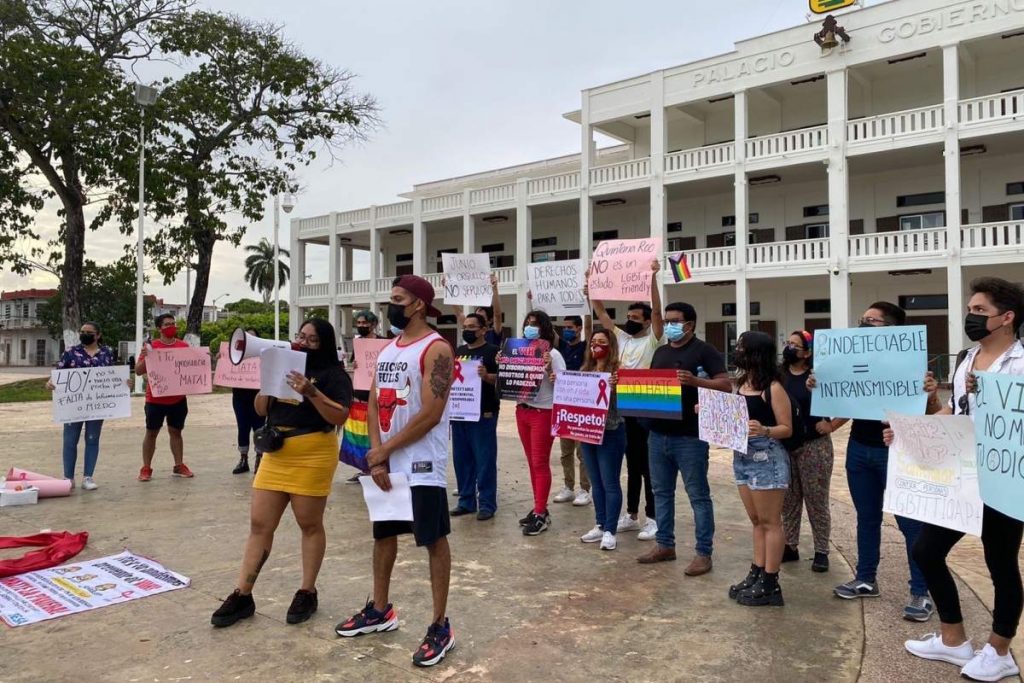 Americans who’ve been to places like Mexico City, Puerto Vallarta, or Tulum may think of Mexico as a kind of paradise: full of vivid natural beauty, replete with diverse cultures and foodways, cosmopolitan—and LGBTQ-friendly. After all, the country passed national LGBTQ protections and legalized same-sex marriage years ago, and many cities are popular and festive international queer destinations.

But the recent alleged murder of a reportedly HIV-positive young gay man in Cancún—a large resort city in the Mexican state of Quintana Roo, on the Yucatán Peninsula between the Gulf of Mexico and the Caribbean Sea—has caused alarm among HIV and LGBTQ activists. They’ve taken to the streets in Cancún and Mexico City to demand hate crime legislation, more specialized prosecution of LGBTQ-related crimes, and an end to longstanding laws that criminalize people with HIV for having sex.

“We want American tourists and residents here to know that it’s not a constant party,” said Yeudiel Espinosa of La Red de Activistas LGBT+ of Quintana Roo. “We’re suffering from these cases of violence against people who are LGBT and/or living with HIV.” According to Espinosa, between 2011 and 2018, 58 LGBT people were murdered in Quintana Roo—but only two investigations were launched.

The most recent case reportedly involves a young man who was allegedly killed by his landlord during a party after revealing his HIV status. (According to Espinosa, this unconfirmed account was provided by the young man’s father.) The suspect was apprehended in Tabasco, about 500 miles from Cancún.

Espinosa said that La Red de Activistas LGBT+ of Quintana Roo would soon meet with local authorities and United Nations representatives to discuss prosecuting the case as a hate crime—although no such law is on the books in Quintana Roo. “We want special prosecutors for LGBT cases,” Espinosa added.

Efforts to Repeal Criminalization of Mexicans Living With HIV

Another goal of the activists is to get rid of laws in 30 of Mexico’s 32 states—as well as a federal law—that criminalize people with HIV for having sex. (Similar efforts are underway in some U.S. states.) Some of these laws, which focus on people passing on a sexually transmitted infection, go back as far as the 1920s or 1930s, but some were updated in the 1980s and 1990s to include HIV.

In some Mexican states, people with HIV are not even allowed to marry or adopt children, according to Axel Rodrigo Bautista Pérez, the openly gay and HIV-positive director of Adherencia de Inspira Cambio, a Mexico City–based HIV rights group. “The decriminalization movement existed before,” he said, “but what’s happened in Cancún has added to it”—as has the recent arrest of an HIV-positive man in Mexico City after his female partner discovered his HIV status and reported him to the authorities.

HIV anti-discrimination efforts have been ongoing in Mexico for years. The Mexican Network Against the Criminalization of HIV, made up of 44 groups, was formed in 2017, said Pérez, and has been aided by Temístocles Villanueva, an openly gay and HIV-positive member of Mexico City’s legislative assembly.

The efforts of these activists to strike discriminatory HIV-related laws from the books have thus far not succeeded. But a small victory came in 2018, when the Mexican Supreme Court declared that it was unconstitutional for the state of Veracruz to add harsh new language specific to HIV in its penal code.

Criminalization isn’t the only concern for people living with HIV in Mexico, said Pérez: The country has also recently had issues with HIV treatment access. Despite Mexico having universal health care that theoretically provides HIV meds to all who need them, some states have experienced shortages recently due to changes in how the government distributes meds that were intended to fight corruption in the health care system. These shortages were compounded by the burden on hospitals due to the COVID-19 pandemic.

“I know many personal stories of people without treatment,” said Pérez, who said he has been engaged in the complicated work of procuring unused meds from many people living with HIV in order to pass them on to those who are currently going without. But he expressed hope that the situation was improving.

Meanwhile, Mexico is currently wrapping up a successful pilot program of pre-exposure prophylaxis (PrEP) distribution that should soon lead to a permanent system in 10 of Mexico’s highest-need states. “It’s supposed to start in September, but if we’re still suffering from a shortage in HIV meds, I don’t know what’ll happen,” Pérez said.

Activists such as Pérez desperately want these stories to get out to the wider world. “They help create political pressure here in Mexico to create change,” he said.

“We were worried this story would get lost,” agreed Andrew Spieldenner, Ph.D., the Guadalajara-based, openly HIV-positive American who heads MPact Global Action, a nonprofit organization that advocates for the health and rights of men who have sex with men worldwide.

A Rising Tide of Community Anger

Alex Garner, MPact’s director of community engagement, said of the alleged Cancún murder: “It’s prompted more people within the community to take action.” Protests after the murder occurred in Cancún and Mexico City. Also sparking outrage, he said, were recent incidents on the beaches of Tulum and Playa del Carmen in which police attempted to arrest gay male tourists for kissing.

Mexico’s approach to LGBTQ-related policy has been contradictory, said Garner. “On the one hand, their health ministry is super progressive and has said things like, ‘Trans people exist,’ and has pushed back on ‘traditional family’ arguments,” he noted. “They present well on a global stage—but then you have a president [Andres Manuel Lopez Obrador] who is shutting down social services, so there’s no resourcing to follow it up with.

“It terrifies [LGBTQ and HIV-positive Mexicans] that this is what their lives are worth,” Garner added. “The challenge is that [the Cancún murder] doesn’t become just another story about violence in Mexico.”

One good thing that has come out of the tragedy, said Garner, is that even despite the lack of a robust government response, there’s been a surge of queer Mexicans speaking out against HIV-phobia on social media in recent weeks.

“The Mexican government hasn’t realized that these outdated penal codes [on disease transmission] foster discrimination, which goes against the Mexican constitution,” said Pérez.

“We’re in a very important moment,” Pérez stated. “We want these narratives to get out there.”

Interviews conducted for this article were aided by the real-time translation work of Gabriel San Emeterio.