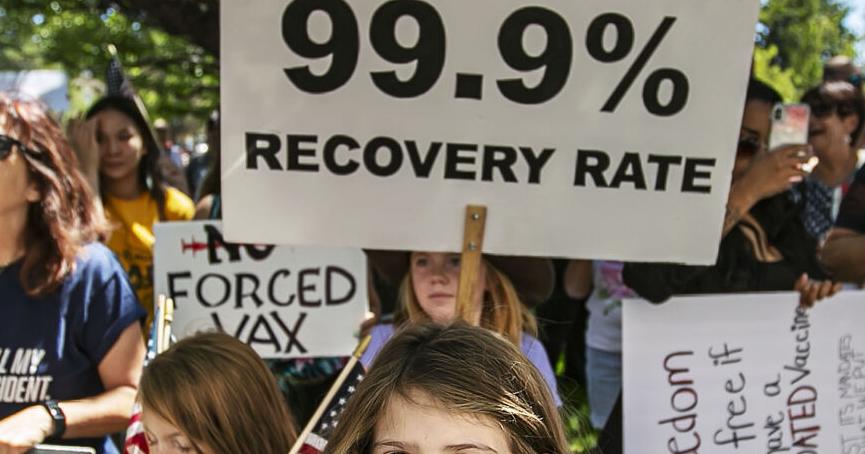 After working as a registered nurse for 11 years, Hollie Ortiz said she’s prepared to quit her job in a matter of days over a state mandate requiring hospital and other employees in congregate settings to get vaccinated against COVID-19.

The 33-year-old said Gov. Michelle Lujan Grisham has no business mandating what people should put in their bodies.

“We’re not saying, ‘Don’t get the vaccine.’ We’re not saying, ‘Get the vaccine.’ We’re saying to the governor, ‘We want the choice to put an experimental vaccine in our body, not to be forced,’ ” said Ortiz, who was one of about 200 people who converged near the entrance of the state Capitol on Friday to protest the public health order. The order, issued Tuesday by Dr. David Scrase, the state’s human services secretary and acting secretary of the Department of Health, requires hospital and congregate care facility workers — which includes nursing homes, residential treatment centers and state correctional facilities — to be vaccinated within 10 days of Aug. 17 or risk losing their jobs.

Protesters said the mandate will make staffing shortages in the health care industry, particularly in hospitals, even worse. At the beginning of the week, the Department of Health issued an “urgent call” for nurses at hospitals statewide. Officials said an increase in hospitalizations not just from a surge in COVID-19 cases but delayed care or postponed surgeries is stressing New Mexico’s hospital system.

There are only a handful of exemptions to the state mandate. They include a qualifying medical condition, a disability or a sincerely held religious belief, according to the public health order. Employees who qualify for an exemption are required to undergo weekly COVID-19 testing and provide documentation.

“The safety and health of New Mexico’s seniors is paramount,” Aging and Long-Term Services Secretary Katrina Hotrum-Lopez said in a statement when the mandate was handed down.

However, the government measures have also sparked stiff opposition from some of the workers required to follow the mandate.

When one of the speakers at Friday’s protest asked the crowd how many people were ready to walk off the job, several dozen raised their hands.

New Mexico hospitals are rapidly approaching crisis standards of care in which health care has to be rationed “because of unvaccinated New Mexicans spreading a highly infectious and incredibly dangerous virus despite the widespread availability and efficacy of vaccines,” she wrote in an email.

“Health care workers are trusted to care for and save the lives of New Mexicans in their most vulnerable moments, which is why it is of critical importance that they be vaccinated,” she wrote. “Vaccines are required in certain high-risk settings, right now, because anything less is irresponsible and will lead to sickness and potentially death, needless death, and the governor and her administration have been consistent throughout this pandemic in acting on her commitment to limit and prevent needless sickness and death.”

Julian Baca, who has worked at the state penitentiary for 13 years, called the mandate “completely unconstitutional.”

“My brothers and sisters, we’re not anti-vaccine,” Baca, who wore a black T-shirt emblazoned with the words ‘Freedom is paid for with the blood of patriots,’ told the crowd.

The risk of unemployment for not getting vaccinated isn’t right either, Baca said.

Like Ortiz, the registered nurse, Jennifer Atler, who works as a radiology technician at two Albuquerque hospitals, said she is also prepared to leave her two jobs rather than take the vaccine.

“I should not be forced to take a vaccine,” she said. “I feel like it’s my choice.”

Sackett noted state hospital leaders reported “a very high percentage of their providers are already vaccinated,” as well as more than 83 percent of state corrections staff.

The New Mexico Medical Society, New Mexico Nurse Practitioner Council and New Mexico Nurses Association all put out statements supporting the state’s action to require vaccinations for hospital workers, Sackett wrote, adding Presbyterian Healthcare Services, the state’s largest private employer, is requiring vaccination for its entire workforce, include those who fall outside of the state’s mandate.

Atler said she’s worked in hospitals for the last year and a half without a vaccine and very little personal protective equipment. She said she’s been trained to protect herself and doesn’t need the vaccine to be safe.

“I’ve worked so hard,” she said. “I feel like I have a high work ethic. I sacrificed for so many years. You know, I’ve worked the two jobs, and I feel like, ‘How dare them?’ ”

Atler noted more than 98 percent of known COVID-19 patients in the U.S. survive but said the longterm effects of the vaccine are unknown.

“I don’t feel like they’ve done enough testing on it,” she said.

Atler said she’s ready to walk off the job but hopes she qualifies for a religious exemption.

“I am a born-again Christian,” she said. “I feel like my body is the temple of the Holy Spirit, and I feel like Jesus died for my sins and I am protected by his blood. I don’t need to be injected with an experimental vaccine to be safe. I put my life in his hands, and I refuse to live in fear.”