Mexican leader: Richest in world should pay to help poorest 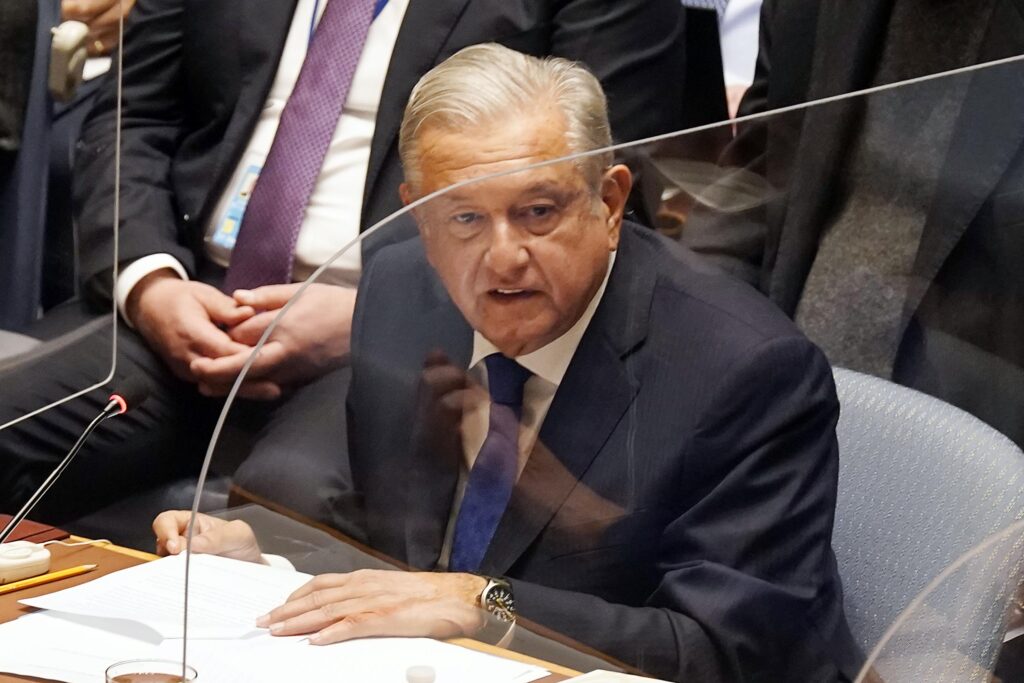 UNITED NATIONS (AP) — Mexico’s president warned Tuesday that the world is sliding from “civilization to barbarity” and called for the thousand richest people, the thousand largest private corporations and the 20 major economies to improve life for the 750 million people now existing on less than $2 dollars a day.

Andrés Manuel López Obrador told the U.N. Security Council that this proposal could generate around $1 trillion annually, which should go directly to the world’s poorest people “without any intermediaries, through a card or personalized electronic wallet.”

In a scathing speech to the U.N.’s most powerful body, the Mexican leader sharply criticized the world’s nations for not addressing corruption in all its forms — political, moral, economic, legal, fiscal and financial — which he called “the main problem of the planet.”

López Obrador, on only his second foreign trip since taking office in December 2018, was presiding over the council, where Mexico is serving a two-year term and holds the presidency this month. The country chose the topic of Tuesday’s meeting: “Maintenance of International Peace and Security: Exclusion, Inequality and Conflicts.”

As an example of exclusion and inequality, he pointed to the distribution of COVID-19 vaccines, where pharmaceutical companies sold 94% and only 6% went to the U.N. World Health Organization’s COVAX program for distribution to poor countries.

“The spirit of cooperation is losing ground to the desire for profit, and this is leading us to slide from civilization into barbarity,” López Obrador warned. “We are moving forward, alienated, forgetting moral principles, and turning our backs on the pain of humanity.”

“If we are not able to reverse these trends through specific actions, we will not be able to resolve any of the other problems affecting the peoples of the world,” he said.

López Obrador said in the coming days Mexico will propose to the U.N. General Assembly “a world plan for fraternity and well-being” to guarantee the right to a decent life for 750 million people trying to exist on less than $2 a day.

He said the proposal can be financed with money from three sources: an annual voluntary contribution of 4% of the income of the world’s 1,000 richest people, a similar 4% contribution from the 1,000 largest private corporations according to their market value, and 0.2% of the GDP of nations in the Group of 20 largest global economies.

López Obrador accused the United Nations, with U.N. Secretary-General Antonio Guterres listening, of failing to help those at the bottom of economic ladder, saying: “Nothing really substantial has been done to benefit the poor in the history of this organization.”

“But it is never too late to ensure that justice is done,” he said. “It is time to act today against marginalization, dealing with the causes and not just the consequences.”

“The Millennium Development Goals, adopted in 2000, provided an initial roadmap for action to support this downward trajectory; it has since been expanded into a comprehensive framework for the well-being of people and planet with the adoption of the Sustainable Development Goals in 2015, with SDG 1 focused specifically on poverty eradication,” he said.

Guterres, who addressed the council before the Mexican president spoke, said the COVID-19 pandemic “has amplified misery and inequalities,” pushing around 120 million more people into poverty, with millions around the globe facing hunger and famines and the world facing “the deepest global recession since World War II.”

“People in the richest countries are getting third doses of the COVID-19 vaccine, while only 5% of Africans are fully vaccinated,” he said. “Even before the pandemic, the world’s billionaires held more wealth than 60% of the global population — and that gap has widened enormously.”

The U.N. chief said rising inequality is a factor of rising instability.

“Today, we face the highest number of violent conflicts since 1945” and “a dangerous sense of impunity is taking hold — seen in the recent seizures of power by force, including military coups,” he said.

“Human rights and the rule of law are under assault,” Guterres said. “From Afghanistan, where girls are once again being denied an education — and women denied their rightful place in society. To Myanmar, where minorities are targeted, brutalized and forced to flee. To Ethiopia, where a man-made humanitarian crisis is unfolding before our eyes.”

The secretary-general called for investing equally in all people’s development, more rigorous monitoring of growing inequalities to address grievances early, including women in building peace, and ensuring that national institutions represent all people. “This means justice systems that apply to all people, equally — not only the rich or those holding the reins of power,” he said.

A presidential statement approved by all 15 council members says exclusion and inequality may be “aggravating factors” in conflicts, and it’s important that governments in conflict and emerging from conflict “address longstanding drivers of instability and inequality.”

The council also stressed the importance of a comprehensive approach to sustaining peace that includes addressing root causes, strengthening the rule of law, promoting economic growth, eradicating poverty, fostering national reconciliation, and mediating grievances “based on religious, ethnic, racial and other differences.”