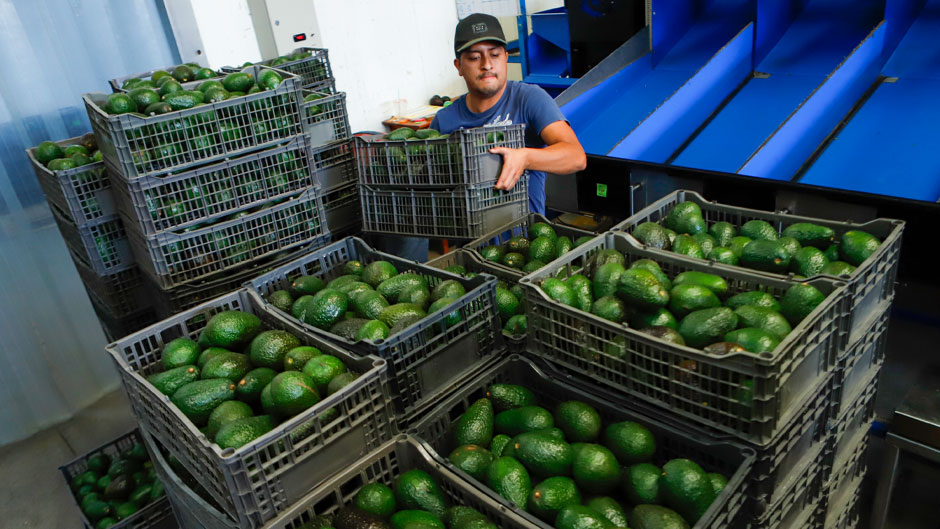 The ban on Mexican avocados has been lifted, but an economist and a student at the Miami Herbert Business School both say that cartels are the real threat to this popular green fruit in the United States.


On the eve of the Super Bowl—where the Mexican avocado producers again ran their ad as they have for the past decade highlighting the health values of the popular fruit—the United States temporarily banned the importation of avocados from Mexico after a U.S. health inspector was threatened at a plant in Michoacán, in western Mexico.

While the ban has since been lifted, Alex Horenstein, an economist in the University of Miami Patti and Allen Herbert Business School, and Eugenio Elizondo, a business school student from Monterrey, Mexico, explored the messy influence of the cartels in Mexico that complicate the commercialization of this fruit—and just about every aspect of Mexican society.

The popularity of “green gold”—as the fruit is sometimes called in Latin America—has skyrocketed in the U.S. and 80 percent of avocados are imported from Mexico, where they are grown year-round as opposed to areas in the U.S. where they are seasonal.

Horenstein, an associate professor and Latin American specialist, said that a new ban or other complications with the crop would reward U.S. avocado producers.

“They would see the price of their product dramatically increased if the bigger supplier, Mexico, cannot sell to the U.S.,” he pointed out. “The biggest losers would be U.S. consumers who would have to pay higher prices and the Mexican producers who lost their biggest market.”

The U.S. lifted the ban this past weekend, after Mexican authorities assured the Department of Agriculture’s Animal and Plant Health Inspection Service that safety measures for inspectors would be strengthened.

Horenstein explained that U.S. inspectors visit plants in Mexico and in other areas and countries to certify that producers comply with U.S. regulations—in other words, that they are free from pests, disease, and other health concerns.

Mexico exports approximately $3 billion worth of the fruit annually. Still that figure accounts for just 0.2 percent of Mexico’s $1.4 trillion GDP, according to Horenstein.

“Therefore, for the country as a whole, the impact on an avocado ban would not be too big. Yet for Michoacán’s producers, it’s a far different story,” he said.

Media reports have indicated that the threatening call and alleged harassment of the U.S. inspector was the result of a cartel turf war in the western Mexican state.

“Cartels in Michoacán are entrenched in all economic activities and, by the observed results of many years of war against them, there seems to be little the Mexican government can do,” Horenstein stated.

Elizondo, originally from Mexico and a junior majoring in finance and economics, highlighted how the cartels have evolved in Mexico. At one time they dealt exclusively in narcotic trafficking, but in past decades they have diversified to infiltrate a wide range of facets of the Mexican economy.

In the 1980s, the Guadalajara Cartel, headed by Miguel Angel Felix Gallardo, controlled all the routes in Mexico which led to less violence, Elizondo explained. Gallardo was arrested in 1989, and the cartel was split up into many sectors—which is when the violence took off.

“When Mexico, under President Felipe Calderon, declared war on the cartels, absolute chaos arose,” Elizondo said, adding that he was living in Mexico at the time and that it was common to see the bodies of cartel war victims publicly displayed. “The war on drugs in Mexico was a total bloodbath,” he added.

Fueled by the demand in the U.S., Mexico became the intermediary for the movement of drug contraband from the cartels in Colombia, and other countries in South and Central America, in the 1980s.

“The cartels mastered moving both people and product to the U.S., their biggest consumer. Now we see the culmination of years and years of drug cartel development,” Elizondo said.

While Michoacán is the only state currently eligible to ship avocados to the U.S. and a major supplier, the Mexican state of Jalisco was approved for distribution in December. Shipments, however, will not commence until May or June and will be much smaller compared to the exports from Michoacán.

“Cartels in Mexico have expanded into other industries and products—hotels, restaurants, and nightclubs as they are able to clean all the money that is coming in,” Elizondo pointed out. “The cartels are certainly interested in avocados because of the revenues they produce.”

Both Horenstein and Elizondo agreed that curbing the power of cartels, which generate huge profits through illegal enterprise, is a supremely complicated endeavor.

“If the cartels maintain their cash flows, they have absolutely no incentive, even war, to stop,” Elizondo said.

Horenstein suggested that the avocado squeeze, while bothersome for U.S. consumers, was a microcosm of a pervasive tragic problem in Mexico.

“Applying the rule of law and dismantling these criminal organizations is the only long-term solution. Yet for that, you need a strong state that is willing to act decisively and not one that many times is simply an accomplice,” he said.

“Cartels in Mexico have penetrated all layers of the civil society and, therefore, it isn’t a problem that can be solved through wars,” he added. “It’s time to focus on more creative approaches than just armed confrontations in which most of the time the heaviest burden is usually on the people who are not even part of the problem.”