Migrants seek safety through information on websites and a newspaper 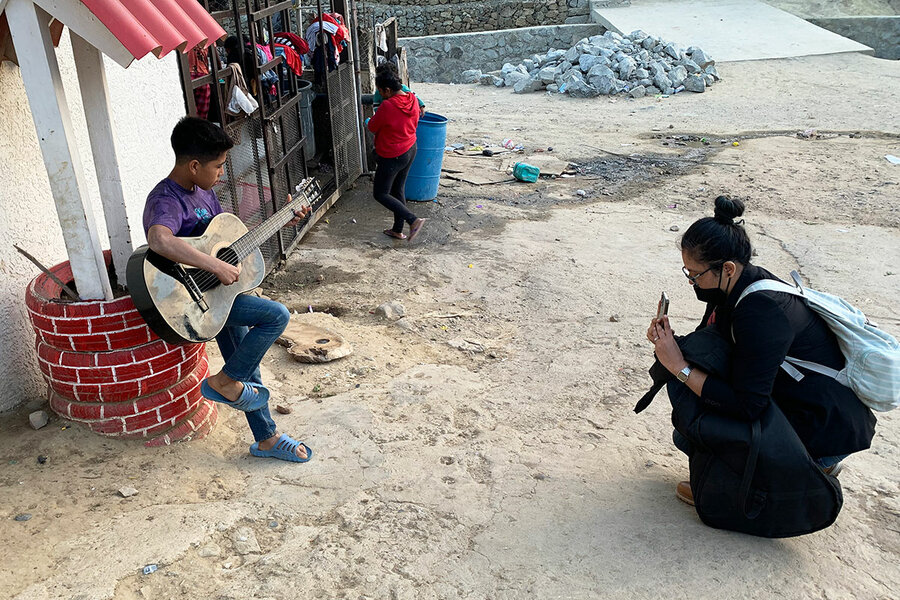 Migrants and asylum-seekers heading north to the Mexico-U.S. border are a particularly vulnerable group of people. They are in unfamiliar lands without friends or family to turn to, they are unprotected from criminals and traffickers, and they have to cope with complicated rules and regulations that can change from one day to the next.

They need information and advice, which is why a group of Mexican and U.S. journalists founded El Migrante, a monthly six-page newspaper full of practical tips, useful phone numbers, and guidance on how migrants can exercise their rights.

Why We Wrote This

Migrants seeking safety in the U.S. undergo dangerous journeys to reach the border; journalist-humanitarians publish a newspaper to advise them how to protect themselves.

There are smartphone apps and Facebook pages that do the same sort of thing, answering questions directly and helping migrants sift genuine information from the storm of fake news and misleading rumors that swirl around the internet.

“I want to know how to navigate this labyrinth,” one migrant told Karla Castillo Medina, a founder of El Migrante. Her project, and others like it, help migrants make informed decisions that keep them safe. Says Monica Vázquez, an official with the United Nations refugee agency, “Information is protection.”

“Good afternoon! Anyone home? I’m just dropping your paper here,” she calls out as she slips the latest issue of El Migrante, a six-page news bulletin for migrants and refugees, under tent flaps and makeshift bedroom doors fashioned out of heavy blankets.

The monthly paper carries news migrants can use to keep themselves safe on their dangerous journeys, such as contacts for safe places to sleep, legal aid organizations, and soup kitchens, as well as profiles of relevant nongovernmental organizations and fellow migrants.

Why We Wrote This

Migrants seeking safety in the U.S. undergo dangerous journeys to reach the border; journalist-humanitarians publish a newspaper to advise them how to protect themselves.

El Migrante has been put together for the past three years by local journalist Ms. Castillo and her colleagues at the international nonprofit Internews. It is one of several initiatives – online and on paper – that have emerged in recent years to equip vulnerable migrants heading for the United States with oftentimes lifesaving information about their rights, where they can seek support, and what is new with ever-shifting border policies.

International law gives migrants the right to seek asylum outside their home country, and Mexican law provides them with some support measures, but most need help learning how to exercise these rights.

From TikTok legal aid video explainers to migration-specific Facebook pages and moderated WhatsApp groups, more and more organizations are stepping up to try and help bridge the information gaps that exist among governments, border patrols, human traffickers, and migrants.

News they can use

The air is stagnant in a small back room of the shelter. Six bunk beds cover every inch of wall space; the only decoration, a metallic-blue balloon shaped like the number three, droops sadly toward the center of the room.

Ms. Castillo introduces herself and asks the group living here, mostly women, if they have heard about El Migrante. She gets a mixed response.

“If you want the most up-to-date news, you can join our WhatsApp group,” she tells them. That is where the Internews team will answer migrants’ questions and direct them toward trustworthy resources in real time. But not toward traffickers – if anybody posts about crossing the U.S. border illegally, they’re expelled from the group.

“It’s dangerous and I fear for them,” says Jesse Hardman, Ms. Castillo’s U.S.-based colleague. “We can’t stop it, but they won’t learn how to do it in our group. Our goal is for people to be relying on safe channels of information.”

One woman reaches out for a paper and flips to an article called “What’s new with Title 42?” The Trump-era rule went into effect with the arrival of COVID-19 and has shuttered the border for the past two years, keeping everyone in this room in a holding pattern.

“The border’s opening up again at the end of May,” says one man.

Nanira, who fled violent threats in the southern Mexican state of Guerrero five months ago, reads the latest edition of El Migrante while cooking dinner at a shelter in Tijuana, Mexico, April 28, 2022.

“Someone told me that’s actually not happening,” says a woman sitting on a bottom bunk, nursing a baby.

People start to talk over one another and Ms. Castillo jumps in to explain that Title 42 was meant to have been overturned by May 23, but a judge temporarily blocked the move. “We’re basically in the same situation as the past several months,” she tells them.

That news seems to suck what little air there is out of the room. The group scatters, as residents turn to cellphones, child care, and new reading material in El Migrante.

Not all migrants have easy access to up-to-date information. Some can’t read easily, lack internet connectivity or a cellphone, or they fled home in such a hurry they had no time to prepare plans for their journeys. The information that is out there can be overwhelming and contradictory, “and unfortunately half of it is false,” says Ms. Vázquez of the UNHCR. “The rumors out there are tremendous.”

That’s what makes trustworthy sources of information invaluable. “The probability of risks goes down when migrants have access to credible information,” says Rodolfo Cruz Piñeiro, director of the population studies department at the College of the Northern Border, outside Tijuana, who has studied how migrants get their information. “You can make better, safer decisions.”

Print news may be dying elsewhere, but it’s alive and well for the thousands of migrants and refugees at shelters across Mexico each month who read El Migrante.

The idea for the paper was born in the fall of 2018, when thousands of mostly Central American migrants traversed Mexico and arrived in Tijuana as part of the so-called migrant caravan. Mr. Hardman, who was working in California for Internews, got in touch with Ms. Castillo, a local reporter at the time, and they teamed up to survey some 200 newly arrived migrants about how they informed themselves and what sorts of questions they had about seeking asylum in Mexico and the U.S., or their rights as migrants.

“One response really stuck with me. Someone wrote, ‘I want to know how to navigate this labyrinth,’” Ms. Castillo says. “That’s exactly what they’re facing: chaos and confusion with no road map.”

The project took off, and a four-person team now reports and delivers 3,000 copies of the print paper once a month to roughly 50 shelters across Mexico, mostly on the southern and northern borders.

They produce a biweekly radio program that runs on a network of Mexican public radio stations, and moderate a WhatsApp group where Haitians, Hondurans, Cubans, Guatemalans, and others – dispersed across Mexico – can find daily news updates and ask more specific questions about anything from the paperwork required to enter a public health clinic to where to get diapers.

Marta Valenzuela, the education coordinator at an NGO supporting migrant families in Tijuana, says El Migrante may be old school with its print format and uncomplicated layout, but it’s exactly what some migrants need.

“It’s easier for them to take something physical,” she says of the people who pass through her office. “They have so much information thrown at them when they arrive. It’s helpful to have something concrete to come back to,” she says.

Not that El Migrante has supplanted the smartphone. Ms. Vázquez runs a page called Confia en el Jaguar, or “Trust in the Jaguar” on Facebook, she says, because that’s where migrants naturally go to communicate with friends and relatives. “Why not put the information they need in the same place? Make it easy and accessible for them,” she says.

Confia en el Jaguar has become a central digital location where international organizations and local NGOs can share messages with the migrant and refugee communities, and where Ms. Vázquez’s team works in coordination with various U.N. agencies to answer questions in real time.

The proliferation in recent years of migrants traveling with smartphones has upped the project’s visibility. People from 36 countries consulted the page in the first four months of this year, and her staff engaged in direct message conversations with some 12,500 migrants and refugees in five languages last year.

She sees efforts like El Migrante and Confia en el Jaguar as working hand in hand, reinforcing trustworthy information “in physical spaces and online. We have to cover all the bases.”

Another online initiative has sprung from a legal aid organization with offices on both sides of the border, Al Otro Lado, or “On the Other Side.” It recently launched an account on TikTok, an app more commonly associated with viral dances and goofy lip-syncs than dissecting the complexity of U.S. border policy.

Migration and border policies are complicated and confusing, which makes it easier for criminals to dupe migrants, says Maddie Harrison, the community education coordinator at Al Otro Lado.

“We try to summarize what big policy changes actually mean for people at the border or thinking about traveling to the border,” Ms. Harrison says. Their most-watched video had 50,000 unique views, and she can see that it was played in countries around the world.

“People thinking about traveling to the border were able to access that information, hopefully making informed decisions” that helped them stay safe, she says.

“If our goal is to help people make informed decisions,” Mr. Hardman says, “the sooner we reach folks, the better.”