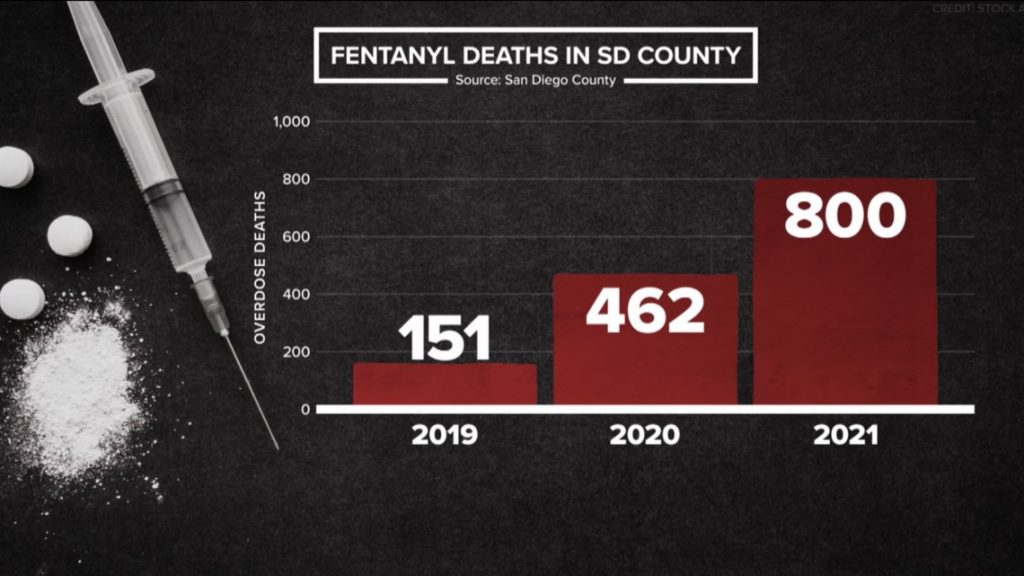 Erin Elliott said her addiction to fentanyl was so strong, she considered using just hours after an overdose almost killed her.

CARLSBAD, Calif. — A 24-year-old Carlsbad woman said her addiction to fentanyl took over her life and almost destroyed it. Erin Elliott said at first she was using fentanyl once or twice a day. But then her habit grew to every thirty minutes. She said she spent around $1000 per week on fentanyl.

She admits she lied to her parents to get money. She described fentanyl as feeling like a warm blanket.

“Something that makes you feel safe for when you’re really cold. You walk out into the sun and that first ray of sunshine just hits you, that’s what it feels like,” she said.

Elliott’s parents, Kevin and Peggy, said their daughter’s life may have looked perfect on the outside, but the truth is she struggled with mental health issues as a teenager and eventually became hooked on drugs.

“The phone calls, the not coming home, the phone calls at 3:00 in the morning,” said Peggy Elliott. “It’s a lot of physical and emotional stress.”

Her parents didn’t know Erin was addicted to fentanyl or that back in September she had overdosed – and almost died.

“The next thing I remember is coming to with a bunch of EMTs standing around me, and my friend crying in the corner screaming like ‘You were dead! You’re dead! You were blue!'” said Erin Elliott.

She added, doctors told her her heart had stopped, and she had no pulse or respirations for several minutes. Elliott said it took three rounds of naloxone to bring her back to life.

Elliott shared her story with CBS 8 amid a fentanyl crisis in San Diego.

WATCH: Deep dive into the fentanyl crisis in San Diego

The county’s new approach to battling this epidemic is to saturate the streets with naloxone.

CBS 8 cameras tagged along with one of the county’s homeless outreach teams as they distributed naloxone in an encampment near Mast Park in Santee.

“It’s better to have it and not need it, then to need it and not have it,” said Stephanie Castenada, a mental health case management clinician for East County Mental Health Clinic. “People are dying.”

Christie Knight lives at the homeless encampment. She distributes naloxone to others who live there.

“It’s scary, it’s really scary. I found someone, one of my friends, dead in his tent,” said Knight. “That’s a lot.”

The county is also making naloxone available at all six of its public health centers for free.

“Anybody can administer it, anybody can get access to this medication,” said Rosemarie Ang, a public health nurse manager at the county’s public health center in El Cajon. “It’s really as simple as someone coming in and saying ‘Can I have a kit please?'”

Right now the county has a stash of nearly 4,000 doses of naloxone, and there are plans to get a lot more. According to Chair Nathan Fletcher, the medication is provided by the state for free.

“The reality is the war on drugs has been an abysmal failure,” said Chair Fletcher. “This notion you’re going to enforce and arrest your way through dealing with the reality of addiction.”

“What we’re doing with naloxone is simply trying to save lives of those who overdose,” he said.

The county estimates about 33,000 doses of naloxone will need to be distributed locally each year to get a handle on this crisis. Another tool that’s up for consideration is fentanyl strips, which would allow users to test their drugs for fentanyl before using.

“If you had a diabetic who didn’t monitor their insulin level properly and they went into diabetic shock, and we said ‘Well we’re just gonna let you die because you should’ve better monitored your insulin.’ We don’t do that. We don’t turn away someone from the emergency room because they didn’t take care of their health and they were overweight saying ‘Well you made a bad choice we’re not gonna treat your heart condition,'” he said.

A conversation with the DEA

“It’s a cheap high. Fentanyl is the trend. The purity we’re is seeing is increasing, which is another extremely scary fact.,” said DEA Special Agent in Charge Shelley Howe.

Though the use of pure fentanyl is becoming more popular, the DEA said many of the deaths are happening to people who have no idea they’re even taking the drug. Users often think they’re taking a drug like oxycodone or cocaine, instead, it’s laced with fentanyl.

“This is one pill can kill. You get one shot at this and it’s over,” said Special Agent in Charge Howe.

In October, the DEA launched a public awareness campaign titled “One Pill Can Kill.”

Special Agent in Charge Howe said the public still needs more education on this topic. She wants parents to realize kids can buy drugs on social media platforms like Instagram and TikTok.

“As your kid sits next to you on the couch, they’re ordering something with emojis and you are none the wiser,” she said.

The DEA posted a chart on its website showing what each of the emojis stands for when it comes to drugs.

Even though the agency said it has seized enough fentanyl for every American to have a lethal dose, the drug keeps coming into the United States through Mexico.

“It’s defeating, yes, but it’s not going to make us quit. It makes us work harder,” said Special Agent in Charge Howe.

Sadly, teenagers are among those who fall victim. Last May, a 15-year-old Coronado High School student died of a fentanyl overdose.

Should naloxone be on hand in schools?

When asked if naloxone should be in San Diego schools, Chair Fletcher said he believes it should be everywhere.

CBS 8 checked with local school districts to find out if they have naloxone on hand at their schools in case of an overdose. San Diego Unified, Coronado Unified and Escondido Unified were the only districts that responded yes. Carlsbad, Poway, Chula Vista Learning Community Charter, Santee, Cajon Valley all said no. CBS 8 did not get responses from Alpine, Grossmont Union, or Sweetwater Union High School District.

Not everyone is using fentanyl to get high

Though some may believe fentanyl users are seeking a high every time they use, Dr. Luke Bergmann, the director of behavioral health services for the county, said some users are using it just to function.

“They’re seeking it out just to stay well because of the sort of cycle of tolerance and withdrawal that we see with opioid use,” said Dr. Bergmann.

He said drug addiction should be treated as an illness. He acknowledged the health care industry bears some responsibility for this crisis. Users sometimes turn to illicit drugs because they can’t get prescriptions like hydrocodone from their doctor. However, he said the idea naloxone will just give users the green light to keep using is false.

“There’s actually really good research that demonstrates communities that lean into distributing naloxone are not increasing drug use,” he said. “I understand, of course, there’s a kind of a common, misconception about naloxone distribution and about harm reduction approach generally, that they’re facilitating drug use, that more people will engage in drug use in the context where harm reduction work is happening, and it’s actually not true,” he said.

“They do dramatically increase the opportunity to keep people alive,” added Dr. Bergmann.

Hope for the future

Erin Elliott said the grip fentanyl had on her was so powerful, that just hours after she nearly died taking the drug, she still thought about using.

“This is how sickening this drug is,” said Elliott.

She’s been sober for four months. She now works with the non-profit A New Path and teaches others how to use naloxone. CBS 8 asked her if she thinks she’ll ever use again.

“It’s really not until they’re ready,” said Peggy Elliott. “You can want it all you want, but it’s not until they hit rock bottom.”