We’re closing the books on 2021 by taking a look at the business news topics that captured your attention the most. And the list contains a few surprises.

OK, this one wasn’t a surprise. Texans’ fascination with this homegrown grocery chain was on full display in March when staff writer Maria Halkias broke the news about the company’s long-awaited entry into the Dallas-Fort Worth area. The San Antonio grocer has long operated its Central Market-branded stores in North Texas and acquired substantial real estate holdings around the region over decades for a potential bigger plan locally. As it stands now, H-E-B will open flagship stores in Plano and Frisco later this year and in McKinney next year. We’ll be watching to see if H-E-B upsets the grocery cart here like it has in Houston and elsewhere around the state.

»2022 look ahead: Will H-E-B’s Plano and Frisco store openings upset the grocery cart?

The great Texas freeze just a little under a year ago left its mark in many ways. And this year’s cold snap was an unpleasant reminder for those who spent days without heat or electricity, or for those who faced electric bills in the thousands. Griddy was a retail provider that offered low rates most of the year. But when the power went out and the Texas electric grid was forced to buy power at market prices, the result was customers receiving monthly bills that climbed to five digits. That was bad news for consumers, but a jackpot for one natural gas company controlled by Dallas Cowboys owner Jerry Jones.

In a year when airlines made headlines for controversies involving mass flight cancellations, vaccine mandates and pandemic-weary workers, it was the attire of some travelers that really resonated with readers. The most notable was when a female bodybuilder was barred from an American Airlines flight from DFW to Miami over what airline staff considered a too-revealing outfit. Like everyone else unhappy with an airline, the bodybuilder took to social media, making her case to her more than 1 million followers on Instagram.

Sure, affordable housing was a hot-button topic in 2021, especially in a hot real estate market where first-time homebuyers found themselves competing against well-heeled private investors wanting to buy up homes to convert them into rentals. So when real estate editor Steve Brown wrote about a plan to build an apartment complex out of shipping containers, it became a viral sensation.

This topic occupied three spots among our most-read stories of last year. The Small Business Administration’s attempt to get pandemic-surviving money out to small business owners was beset by a series of problems. But when the government agency appealed for even more applicants after rejecting scores of business owners, it was too much for readers to fathom. Staff writer Natalie Walters was all over the topic in 2021.

During the pandemic, maybe we all went a little overboard with our online ordering. So much so that we heard about lines of truckers backed up along Interstate 20 waiting to get into an Amazon fulfillment center to pick up or drop off deliveries. As staff writers Marin Wolf and Maria Halkias learned, some truck drivers waited in line for 12 hours at a time. And it didn’t matter if there was a big sale going on or not.

»2022 look ahead: How long will supply chain issues persist in the new year?

There’s always a feel-good story among the year’s best performers. In 2021, it was this one about a Frisco brother-sister duo making $32,000 a month mining digital currency Ethereum. What were you doing when you were 9 or 14? 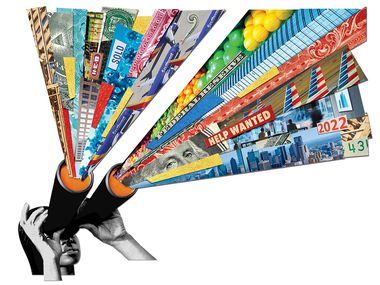