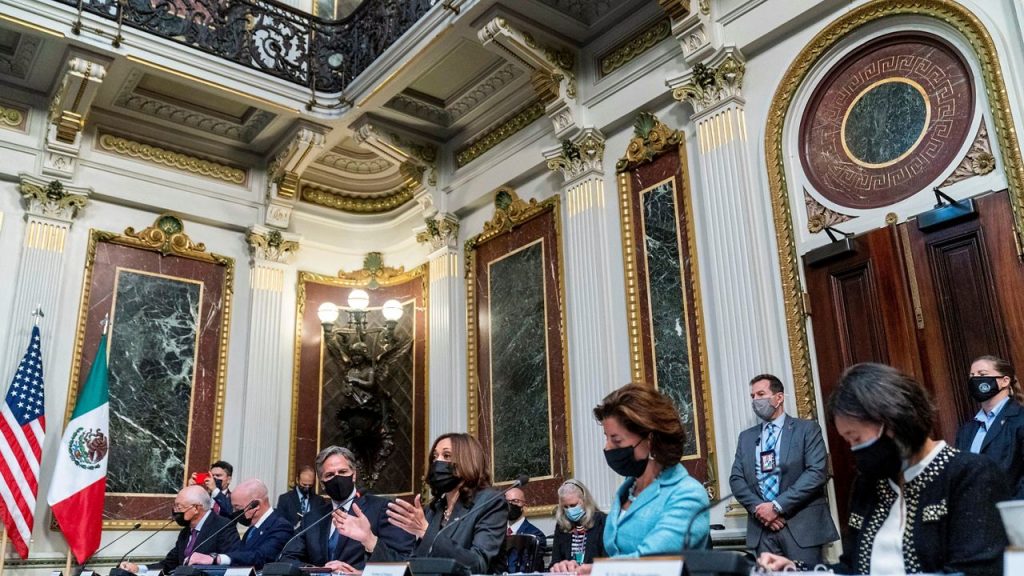 Leaders from the U.S. and Mexico convened in Washington on Thursday to restart high-level economic talks between the two countries for the first time since 2016, with top advisers from both countries expressing eagerness to join forces on shared priorities, including ransomware attacks and the COVID-19 pandemic.

What You Need To Know

The High-Level Economic Dialogue, or HLED, first began in 2013 during the Obama administration, but stalled for four years after the 2016 election of then-President Donald Trump.

Delivering brief remarks ahead of Thursday’s meeting, Vice President Kamala Harris sought to emphasize the close ties between both nations, praising Mexico as “our friends, our partners.”

“We are very excited about this next stage of the relationship and partnership between the United States and Mexico,” said Harris, who in June traveled to Mexico City for talks with the country’s president, López Obrador. “Mexico’s economic stability is in the interest of the United States,” she said.

Harris also stressed on Thursday the importance of improving relations in a moment when dealing with the COVID-19 pandemic, climate change, cyber threats and supply chain disruptions are high priorities for both nations.

“This dialogue was last convened in 2016,” Harris said before the meeting. “And so much has happened. So much has changed, so many challenges have been presented – and yes, also opportunities — in the intervening years.”

“Since then, a global pandemic has undermined the stability of our global economy. Supply chains have been disrupted and threats from climate change to cyberattacks have threatened our security — both in terms of our national security and our economic security.”

“We know that our world is also more interconnected, and more interdependent than ever before, again highlighting the importance of the partnership and the relationship between the United States and Mexico,” Harris said. “Mexico is our closest neighbor … and a strategic partner.”

In her remarks, Harris praised Mexico as “one of our most important economic relationships,” adding that, “eighteen states in the United States count Mexico as their top one, or second – their first or second export destination.”

“$1 billion crosses our shared border every day in goods. All of that making clear that this high level economic dialogue is an opportunity to deepen our ties and advance our collective goals,” Harris continued.

“Together, we will strengthen supply chain, resilience. Together, we will modernize our hemispheres infrastructure through the plan, the president has outlined the partnership and cooperation with our friends, [and] build back a better world.”

“Today’s meeting is very important so that we initiate a new stage, because there has not been attention to the population that is obligated to migrate,” Mexico’s president, López Obrador, said during a separate news conference Thursday. “There hasn’t been in years. Nothing. Everything is contain. Everything is coercion. And that is not how social problems are resolved.”

The Associated Press contributed to this report.