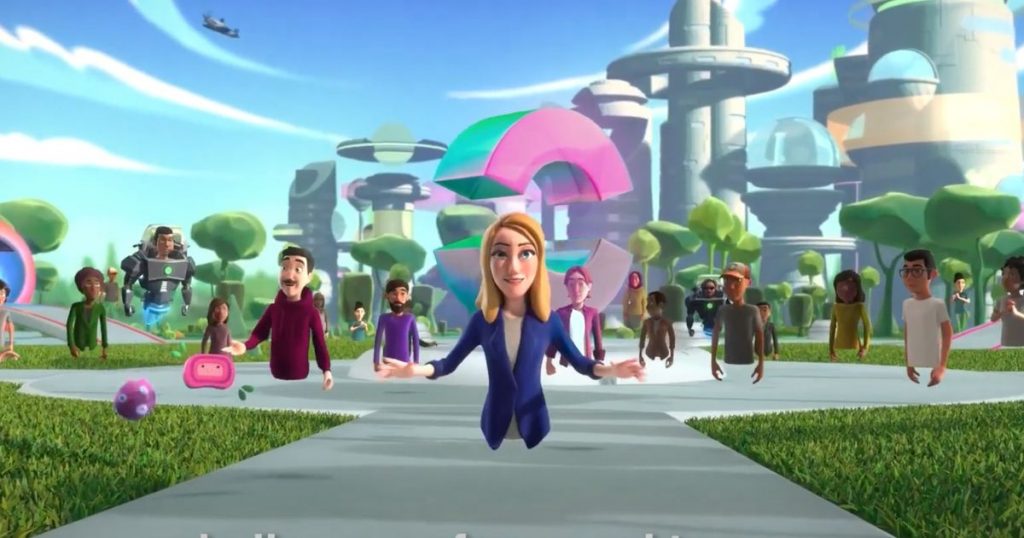 The video starts off with an upbeat and cheery host saying, “Facebook already has access to all my personal information and data so why not give them access to my face,” as she wears an Oculus headset. The host then continues to sarcastically explain how wonderful the metaverse is because users won’t have to subject themselves to issues that have been raised about Facebook, such as disinformation, politicking, or friends from high school posting “the most f-ked up conspiracy theory you ever read—and then seeing your mom like that very same post.” The video also pokes fun at some Horizon design choices like the lack of legs for individual avatars.

“Across our team, we have a mammoth dose of skepticism about Facebook running a virtual world, given how they’ve impacted the real one – our privacy, political systems, personal relationships, and what’s left of a shared version of reality have all suffered at the hands of this company,”  Zach Blume, co-founder, and president of Portal A said. “Sometimes you just need to say out loud what everyone is already thinking.”

Meta did not comment directly on the spoof video, but it held an event with ad agencies on Thursday in which it spoke to advertisers about its plans for the metaverse. Meta’s representatives did address brand and user safeguards it was building in virtual reality, according to agency execs at the meetings. Facebook has been working on brand safety in general across the social network, and last year it started testing new controls for advertisers to avoid appearing near content in the news feed that offends their sensibilities.

Read more: Meta offers a glimpse of the metaverse

Meta has been criticized for years over concerns about some of the conversations on social media, with watchdogs claiming it is responsible for amplifying hateful messages and degrading civil discourse. Some of those same critics are now voicing their fears about the same troubles following Meta into the metaverse. But it’s an issue Meta is hoping to nip in the bud before it takes hold. It recently deployed new tools, like a block button to avoid unwanted interactions. There also is a new force field around avatars to ensure virtual personal space isn’t violated.

“Privacy and safety need to be built into the metaverse from day one,” Meta CEO Mark Zuckerberg said during Meta’s virtual Connect conference in October. “You’ll get to decide when you want to be with other people, when you want to block someone from appearing in your space, or when you want to take a break and teleport to a private bubble to be alone.”

Another year, another small agency conference! Entries are now open for the 2022 Ad Age Small Agency Awards, the only program of its kind that honors small, independent ad agencies. This year in particular we are looking for shops that survived and thrived despite challenges that resulted from working remotely, production restrictions, client uncertainties, and more. We’re looking for agencies that broke creative boundaries, motivated employees, earned new clients, and persevered financially, as well as shops that have found new ways to adapt and grow in changing world of media and marketing.

The deadline to enter this year’s awards is April 27, 2022; click here to apply.

Winners of this year’s Small Agency Awards will be honored both in Ad Age’s print and online editions in July.  An awards ceremony to honor the winners will also be held at Ad Age’s Small Agency Conference, which will be in-person this year, July 26-27 in Chicago. Stay tuned for more details on tickets for this year’s conference.

R/GA is elevating its global creative leadership team by creating three new positions for the agency.

Gabriel Cheung is a new global executive director at R/GA, where he has worked for over 14 years. He is the global creative lead for Nike and American Express. Chapin Clark takes on the same title and has been with the agency since 2001, where he started as a copywriter on the IBM account. Since 2009 he has been the distinctive voice of R/GA on Twitter.

Nikhil Mitter now takes the title of global creative director. While at R/GA, he has helped shape experiences for clients including Verizon, Nike, Samsung, and Goldman Sachs. He has previously held positions at a biotech startup, AREA 17 and Tribal Worldwide.

All three will work with the other global creative leads on the team, Daniel Barak and Ari Halper, along with Global Chief Creative Officer Tiffany Rolfe.

A new multicultural agency has launched

Former advertising executives of the multicultural agency Lerma/ have teamed up to create a brand new agency called BeautifulBeast, which officially launched on Feb. 15, with hubs in Dallas and Miami.

The agency was founded by Aldo Quevedo, the CEO and creative chairman of the new company, Flor Leibaschoff, chief creative officer, and Salma Gottfried, VP of brand leadership. The three have worked together for more than 20 years, first at Dieste and then Lerma. The trio said they waited until after the Super Bowl before launching as they were finishing up digital work for Avocados From Mexico. Mauricio Del Castillo has also been named chief digital strategist for the agency.

“BeautifulBeast was born amid the pandemic, so flexibility is a fundamental part of our DNA in every way. The world has changed, and we decided that this was the best time to launch because clients and talent are demanding a new way of working,” Quevedo said.

The brand new agency has already picked up its first client: the Colon Cancer Coalition.

The 4A’s Foundation has partnered with VMLY&R to launch “Dear Black Talent,” a recruitment platform geared toward attracting new diverse talent into the industry and elevating diverse talent as well.

Upon entering the site users are tasked with answering a questionnaire focused on how their skills can be used in advertising. On completion, they can learn more about roles as well as apply to a range of job listings provided by agency partners. Other launch partners include Group M, Yahoo, Partners + Napier, Kettle, Hill Holliday, Campbell Ewald, BBH USA, Leo Burnett Worldwide, Omnicom Health Group and Day One Agency.

Brooklyn-based illustrator and designer Sophia Yeshi led the creation of the “Dear Black Talent” graphics displayed throughout the site. The initiative also includes a targeted social campaign to drive talent to the site, out-of-home promotional assets, and a series of promotional panels and events.

On February 25, the 4A’s Foundation and VMLY&R will host a virtual event offering participants resources and networking opportunities to find their next career moves.