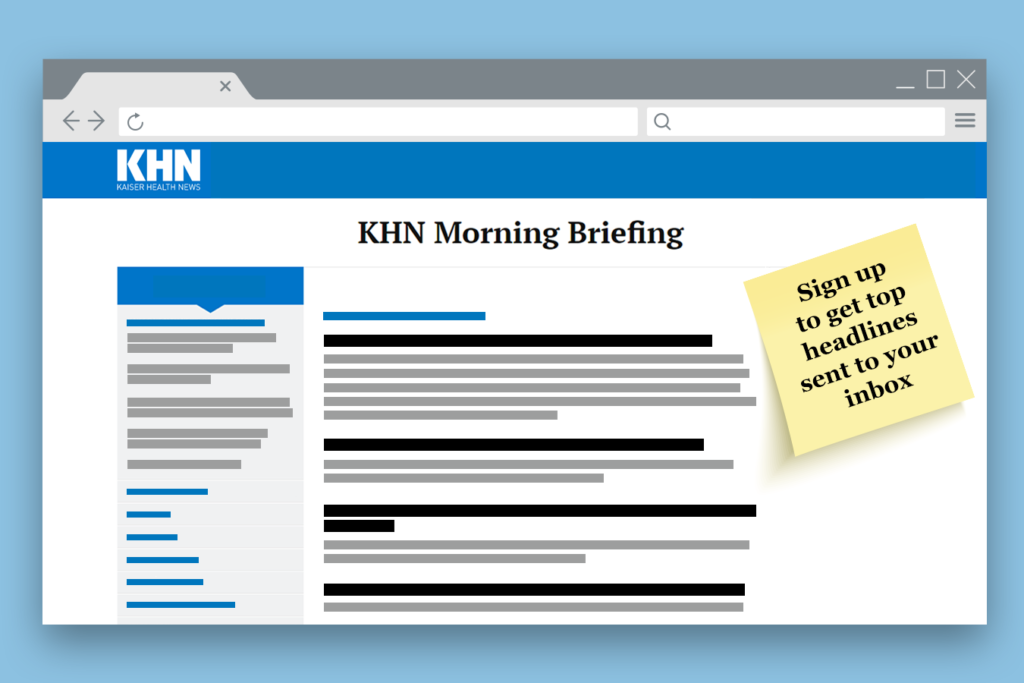 Each week, KHN finds longer stories for you to sit back and enjoy. This week’s selections include stories on toxic fumes, birth injuries, allergies, covid and more.

On a recent weekend, when Ana Gonzalez was driving through Rialto, California, where she has lived for 23 years, she saw a disturbing and increasingly familiar sight. Dozens of 18-wheel diesel trucks idled outside an Amazon warehouse, spewing fumes not far from a high school and homes. It made Gonzalez so angry that she took out her phone to broadcast the scene to her Facebook page. Gonzalez’s frustration with the high concentration of warehouses and the truck traffic they bring was spurred two years ago when she took one of her two kids, Jose, then 12, to the doctor because he was constantly coughing and getting sick. She said the doctor told her that Jose’s bronchitis and developing asthma were direct results of local pollution. (Solon and Glaser, 4/27)

When Shalemu Bekele awoke on the morning of Feb. 15, the town house he shared with his wife and two children was so cold, his fingers felt numb.After bundling up in extra layers, Bekele looked out a frosted window: A winter storm had swept across Texas, knocking out power to millions of homes, including his own, and blanketing Houston in a thin layer of icy snow. … Bekele’s wife, Etenesh Mersha, 46, meanwhile, made a fateful decision, one repeated by scores of Texas residents who lost electricity that week. Desperate to warm up, she went into their attached garage and turned the key to start her car. As the engine hummed, it provided power to run the car’s heater and charge her phone while she talked to a friend in Colorado — at the same time, filling her garage and home with a poisonous gas. (Trevizo, Larson, Churchill, Hixenbaugh and Khimm, 4/29)


ProPublica:
How To Prevent Carbon Monoxide Poisoning In Your Home

Carbon monoxide poisoning is almost entirely preventable. And yet, every year, more than 400 people in the U.S. die and tens of thousands more are sickened. Often, the culprit is a common household appliance that malfunctions or is used improperly. But carbon monoxide poisoning can be especially dangerous during power outages, when people use alternative sources of fuel or electricity such as generators. (Khimm and Trevizo, 4/29)


Miami Herald and ProPublica:
Parents Want Justice For Birth Injuries. Hospitals Want To Strip Them Of The Right To Make That Decision.

Ashley Lamendola was still a teen when medical staff at St. Petersburg General Hospital delivered the awful news that would change her life forever: Her newborn son, Hunter, had suffered profound brain damage and would do little more than breathe without help. “It was like an atomic bomb went off in my life,” she said. Lamendola believed the hospital was partly responsible for Hunter’s birth injuries. But Florida is one of two states that shield doctors and hospitals from most legal actions arising from births that go catastrophically wrong. Lamendola filed a lawsuit against St. Petersburg General anyway, and when it appeared she was gaining traction, the hospital advanced an extraordinary argument. (Miller and Chang, 4/26)


The New York Times:
They Call It A ‘Women’s Disease.’ She Wants To Redefine It.

Most labs devoted to women’s diseases are accompanied by obvious symbols of womanhood: a rose, a tulip, an hourglass silhouette. Not Linda Griffith’s. Tucked away in the building for biological engineering, the M.I.T. Center for Gynepathology Research is marked only by the letters CGR in red and black, the G formed from a curved arrow representing the hand of the engineer. “We needed something that wasn’t all pink and flowers,” said Dr. Griffith, the lab’s director. “We really thought it should be, like, ‘This is science.’” (Gross, 4/27)

Carrie Martin had a two-part system to protect her food-allergic daughter from accidental exposures to peanuts or sesame. Martin scoured ingredient lists at the grocery store. Her husband re-checked them at home before cooking meals. “We thought our system was so foolproof,” said Martin, a teacher in Ormond Beach, Florida. But once, in 2012, Martin unwittingly grabbed the wrong pizza crust at the grocery store. After her daughter coughed, threw up, turned red, and got treated in the emergency room, they pulled the wrapper out of the trash and realized why — the pizza had contained sesame. Years later, in 2018, the family experienced another scare. Some restaurant-baked bread sent their daughter into anaphylaxis, a life-threatening allergic reaction that required two epinephrine injections and a trip to the hospital. “It’s like you’re back to ground zero again,” Martin said. A single reaction can plunge even the most vigilant food allergy families back into what-ifs and panic. (Landhuis, 4/28)


The New York Times:
Imagine, Surgery Without A Scar

Cleft palates that close without scars. Burn wounds that recover without a trace of injury. Years-old disfiguring scars that disappear, leaving skin smooth and flawless. It sounds like science fiction, but healing without scarring may become a tantalizing possibility. In a study published Thursday in Science, two researchers at Stanford University report that they have figured out the molecular signals that make scars form and found a simple way to block them — at least in mice. (Kolata, 4/22)

After a particularly vigorous workout or sports injury, many of us rely on ice packs to reduce soreness and swelling in our twanging muscles. But a cautionary new animal study finds that icing alters the molecular environment inside injured muscles in detrimental ways, slowing healing. The study involved mice, not people, but adds to mounting evidence that icing muscles after strenuous exercise is not just ineffective; it could be counterproductive. Check inside the freezers or coolers at most gyms, locker rooms or athletes’ kitchens and you will find ice packs. Nearly as common as water bottles, they are routinely strapped onto aching limbs after grueling exercise or possible injuries. The rationale for the chilling is obvious. Ice numbs the affected area, dulling pain, and keeps swelling and inflammation at bay, which many athletes believe helps their aching muscles heal more rapidly. (Reynolds, 4/21)


Scientific American:
Flu Has Disappeared Worldwide During The COVID Pandemic

Since the novel coronavirus began its global spread, influenza cases reported to the World Health Organization have dropped to minuscule levels. The reason, epidemiologists think, is that the public health measures taken to keep the coronavirus from spreading also stop the flu. Influenza viruses are transmitted in much the same way as SARS-CoV-2, but they are less effective at jumping from host to host. As Scientific American reported last fall, the drop-off in flu numbers was both swift and universal. Since then, cases have stayed remarkably low. “There’s just no flu circulating,” says Greg Poland, who has studied the disease at the Mayo Clinic for decades. The U.S. saw about 600 deaths from influenza during the 2020-2021 flu season. In comparison, the Centers for Disease Control and Prevention estimated there were roughly 22,000 deaths in the prior season and 34,000 two seasons ago. (Peek, 4/29)


Scientific American:
Religion Both Helped And Hurt During The Pandemic

People turn to religion for comfort and hope in times of crisis and uncertainty, and March 2020 was one of those times. Americans experienced a spike in distress during this tumultuous period, but is it possible that religion could have spared some Americans from that distress? To measure the impact of religion during the early days of the COVID pandemic in the United States, I analyzed data from about 12,000 Americans surveyed March 19–24, shortly after the World Health Organization declared COVID-19 a global health pandemic. (Schnabel, 4/29)


The Atlantic:
India’s COVID-19 Crisis Is The World’s Crisis

India considered itself to be “in the endgame” of the pandemic just a few weeks ago. Now it is the global epicenter. The country recently surpassed the devastating milestone of more than 345,000 new COVID-19 cases in a single day, the biggest total recorded globally since the pandemic began. What is taking place in India isn’t so much a wave as it is a wall: Charts showing the country’s infection rate and death toll, which has also reached record numbers in the country, depict curves that have shot up into vertical lines. Public-health experts aren’t optimistic that they will slope down anytime soon. (Serhan, 4/26)


The Wall Street Journal:
When The EU’s Covid-19 Vaccine Drive Stumbled, It Turned To Mr. Fixit

Thierry Breton knew the European Union’s vaccine campaign needed help when his boss called him in January.Covid-19 cases were surging and EU deaths linked to the coronavirus had topped 400,000. The bloc lagged weeks behind the U.S. and U.K. in approving vaccines and even further behind in inoculating people. Then Pfizer Inc. and AstraZeneca PLC stunned EU officials by saying deliveries would arrive late. European Commission President Ursula von der Leyen summoned Mr. Breton to join an emergency videoconference with top pharmaceutical executives and then other calls with German Chancellor Angela Merkel and French President Emmanuel Macron. (Kostov and Michaels, 4/28)