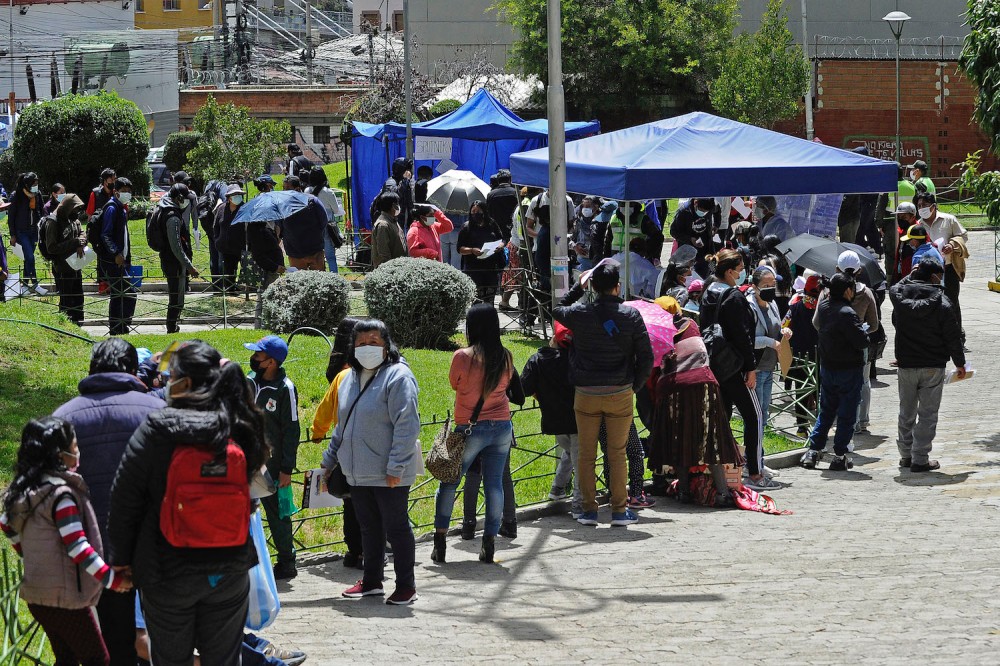 The highlights this week: how governments across the region are responding to the rapid spread of the omicron variant, Mexico faces a record year of asylum applications, and the effigies that burned away at the start of the year.

If you would like to receive Latin America Brief in your inbox every Friday, please sign up here.

South America rounded out 2021 with the unexpected distinction of having the highest COVID-19 vaccination rate of any region in the world, with more than 63 percent of the population fully vaccinated. It had been the pandemic’s epicenter only seven months earlier.

After leaders initially scrambled to procure jabs, they were distributed through relatively well-established public health systems and met with low levels of vaccine hesitancy. Politicians who faced public blowback over vaccine-related scandals earlier in the year—such as in Argentina’s “VIP vaccination-gate”—appeared to have reasons to breathe easier.

Then came the omicron variant—and the abrupt reminder that vaccines are only one part of the pandemic toolkit.

While at-home rapid antigen tests have been a key method of tracking the virus’s spread in European countries for months—and more recently in the United States—they are far less common in Latin America and are not even approved by health regulators in some countries. Instead, people with symptoms get tested by private pharmacy technicians or at public testing centers. Long lines and crowding have overwhelmed centers in Mexico, Argentina, Bolivia, and Peru in recent days.

In Bolivia, it was not only testing centers but also vaccination centers that were overwhelmed this week in the wake of a Jan. 1 vaccine requirement to enter public and some private buildings. In fact, there was so much crowding and confusion that the Bolivian government pushed back the deadline by almost four weeks.

These obstacles mean infections are likely even more underreported than usual. University of Buenos Aires Medical School professor Jorge Geffner told La Nación that the true number of cases recorded in Argentina is likely at least double the official statistics due to the country’s high rate of test positivity—more than 50 percent on Wednesday. In an extreme case, Brazil’s federal COVID-19 reporting system has been completely offline since it was hacked in early December 2021. The health ministry told Folha de S.Paulo it is expected to be running again sometime this month.

New waves of infection may also lead to political repercussions for some leaders. Brazilian President Jair Bolsonaro’s approval ratings are already at record lows as his reelection campaign nears, and a fresh wave of pandemic mayhem could sink them even lower.

Further north, Mexico’s virus response playbook appears not to have changed much in response to omicron: avoid major shutdowns and let infections instead blow through the population.

Mexican President Andrés Manuel López Obrador’s protégé Claudia Sheinbaum Pardo holds an especially visible office as the mayor of Mexico City, which racked up one of the highest excess death tolls in the world during an earlier wave of the pandemic. Sheinbaum is thought to be a leading choice to succeed López Obrador in Mexico’s 2024 presidential election. She is popular but not immune to drops in approval; her ratings fell last year after a subway disaster killed 26 people.

Perhaps wary of the criticism it received for its own intense lockdowns at the start of the pandemic, Argentina’s government has so far refrained from implementing new restrictions on movement. On the contrary: Buenos Aires is in the midst of a new campaign to promote domestic tourism by giving travelers cash credits to be used by the end of 2022. Hotels at popular beachfront destinations are currently near 100 percent capacity, El País reported.

Ecuador is taking a more restrictive approach, delaying the start of 100 percent in-person schooling until the beginning of February—and even until May, in parts of the country—and implementing a requirement that all Ecuadorians be fully vaccinated. Brazil, Chile, and Mexico have begun or announced vaccine booster campaigns.

The next few weeks will show how well these various measures hold up. In addition, omicron’s arrival in Latin America might also yield more data about how the Chinese Cansino, Sinovac and Sinopharm vaccines—commonly used in the region—respond to the variant.

Chinese vaccines account for around one-fourth of vaccines ordered directly by Latin American governments, according to the Americas Society/Council of the Americas. Many countries that have published data about vaccine responses to the virus, such as the United Kingdom and South Africa, have relied on other shots. And China itself has opted for the resumption of harsh lockdown measures as part of its zero-COVID-19 strategy, providing little insight into how the country’s vaccines stand up to the new variant in practice.

A new digital currency. The Bank of Mexico announced it would launch its own digital currency by 2024 in a tweet sent on Dec. 29, 2021. The timeline follows a report the bank published earlier that month that laid out plans to launch a digital currency but didn’t specify when. According to that report, the currency would not be a cryptocurrency, which uses encryption to secure transactions, but rather just a digital version of the Mexican peso that could be used by people without bank accounts.

That distinction sets Mexico apart from El Salvador, where Bitcoin is legal tender, as well as Venezuela, which added the word “digital” to its currency, the bolivar, when it devalued it in October 2021. Venezuela did not actually create a digital currency (a cause of great confusion, since the “digital bolivar” is a physical currency).

Private cryptocurrency start-ups are popular in Mexico, however. Mexico City-based Bitso said it’s helping transfer around 2.5 percent of the more than $40 billion in remittances that enter Mexico from the United States annually.

Drafter-in-chief. Forty-year-old epidemiologist María Elisa Quinteros was elected the new president of Chile’s Constitutional Convention Wednesday after 20 hours of debate. Quinteros is left-wing but does not hail from Chilean President-Elect Gabriel Boric’s political movement. She succeeds the convention’s previous president, Elisa Loncón, whose term is up.

The fact that it took eight different rounds of voting to elect Quinteros bodes poorly for the convention’s future ability to reach a consensus, Rocío Montes wrote for El País. A simple majority of 78 delegate votes out of 155 was necessary to choose a president, but approving draft articles within the convention will require 100 votes. The group has six months left to finalize a draft document among themselves.


An aerial view of the native cerrado (savanna) in Formosa do Rio Preto, Brazil, on May 29, 2019.NELSON ALMEIDA/AFP via Getty Images

Beyond the Amazon. New data shows that deforestation between July 2020 and July 2021 rose to its highest level in six years in Brazil’s cerrado, a brushy plain that covers more than 20 percent of the country. Brazil’s government released the figures on New Year’s Eve, prompting criticism that they aimed to downplay the information.

The cerrado is classified as a savannah—the kind of biome scientist warn the Amazon rainforest risks becoming if its own deforestation continues. Tree loss in the cerrado is a major contributor to Brazil’s greenhouse gas emissions each year.

Out with the old. Also on New Year’s Eve, people in at least 12 countries across Latin America took part in an annual tradition of burning a physical representation of things (or people) they hoped to leave behind in 2021. Plenty of the dolls that were set aflame represented COVID-19. Some also represented politicians, such as outgoing Honduran President Juan Orlando Hernández and a former mayor of Quito, Ecuador, who was impeached in June.

A New York Times piece traces the history of burning “Old Years” in Ecuador and Colombia, noting it can be traced back to European traditions and Indigenous rites. Infobae writes that in Ecuador, the tradition was also spurred by efforts to burn away belongings of people who had yellow fever in an 1842 outbreak.

Over recent decades, several Latin American cities have been commended for their sustainability efforts. Which of the following cities has planted thirty “green corridors” of trees, successfully lowering average temperatures as much as 8 degrees Fahrenheit in some places? 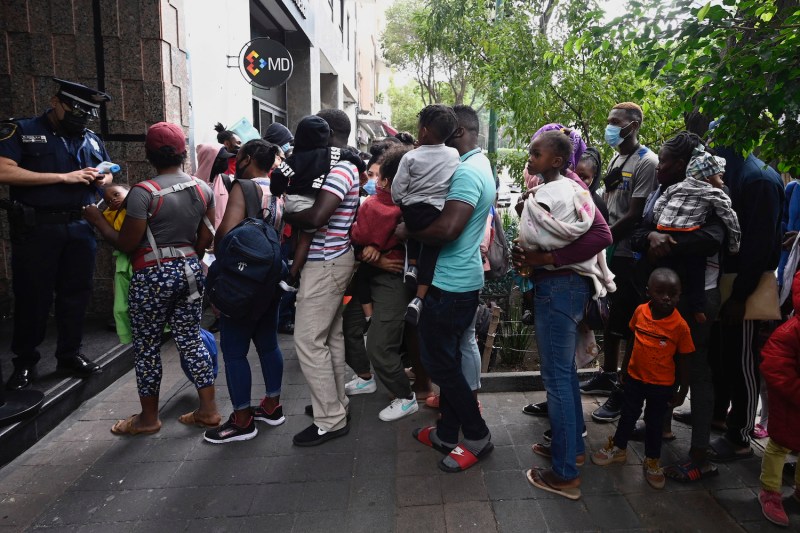 Haitian migrants wait to enter the offices of the National Commission for Refugees to ask for asylum in Mexico in Mexico City on Sept. 23, 2021.ALFREDO ESTRELLA/AFP via Getty Images

More than 131,000 people applied for asylum status in Mexico in 2021, the highest number ever and an 87 percent increase from a previous record set in 2019.

Haitians were the largest group of applicants, accounting for 51,857 applications—though thousands more were children of Haitians born in the last few years in Chile and Brazil, said Andrés Ramírez, the head of Mexico’s refugee agency. Hondurans followed with 36,361 applicants.

The numbers appear to reflect large northbound migrant flows, heightened restrictions at the U.S. border, and the fact that Mexico has cut back on temporary humanitarian visas for migrants since former U.S. President Donald Trump urged the country to curb migration in 2019. Haitians who previously would have accessed those visas are instead applying for refugee status and have overwhelmed the processing system, Ramírez said.

The Biden administration has continued close coordination with Mexico on migration policy. The two countries jointly restarted a program last month, where some people seeking asylum in the United States must wait in Mexico for their hearings.

For both 2021 and 2022, Mexico’s government reduced its refugee agency’s budget in inflation-adjusted terms. The United Nations, which has assisted the agency with training for many years, has helped cover some of its costs, most recently with a $5.6 million commitment in December 2021. But it’s only a stopgap measure.

A different federal agency, Mexico’s National Institute of Migration (INM), has forbidden thousands of asylum-seekers from leaving the southern Mexico town of Tapachula while they wait for months for their applications to be processed. In recent weeks, INM sent a few buses to take asylum-seekers to other cities but did not provide clear information about which migrants can expect to be bussed.

Both Ramírez and the United Nations have urged the López Obrador administration to grant other kinds of humanitarian visas to migrants to ease the burden on the refugee agency, with little effect so far.