Brazil vs. Argentina suspended: Why World Cup qualifier was not played 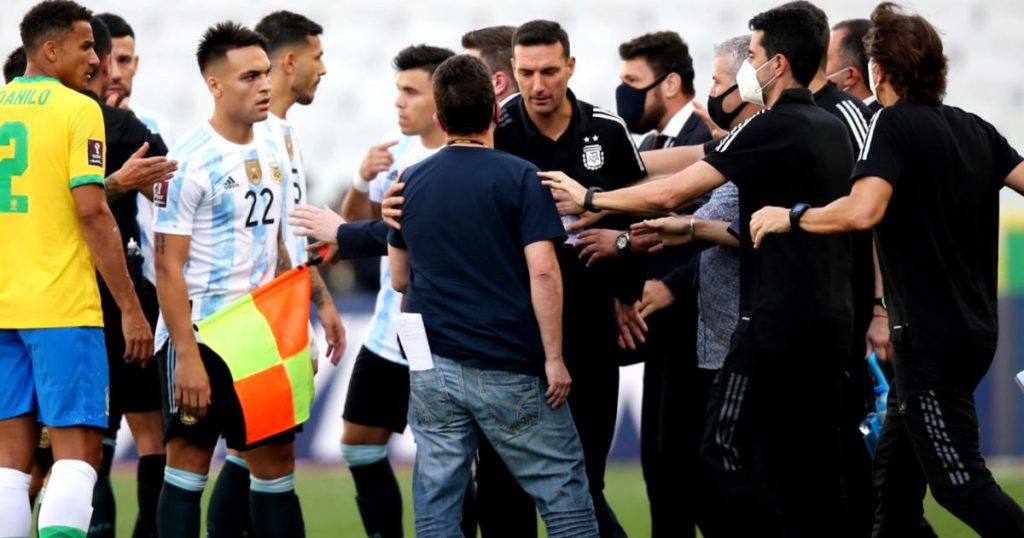 World Cup qualifiers don’t get much better than Brazil vs. Argentina. That is, when the teams can actually play.

The two South American heavyweights — currently No. 1 and No. 2 in the region’s qualifying standings — were set to meet for the first time during the 2022 FIFA World Cup qualifying campaign Sunday in Sao Paulo, but officials from Brazil’s ANVISA health authority interrupted the match in the 10th minute to demand that four Argentine players who traveled from the United Kingdom be deported for violating the country’s health regulations. The entire Argentina team proceeded to leave the field and never reemerged from the locker room.

The Argentine soccer federation’s official Twitter account was first to announce the suspension of the match. That was followed by CONMEBOL, the governing body for the sport in South America. It’s unclear if and when the match will be resumed or replayed.

FIFA eventually followed up with its own statement, which it concluded by stating that “further details will follow in due course.” Interestingly, the Brazilian federation’s statement included the following:

“The CBF defends the implementation of the most rigorous health protocols and complies with them in their entirety. However, it was absolutely surprised by the timing of the action by [ANVISA] with the match already underway, since ANVISA had the power to exercise its activity in a more appropriate manner in the days prior to the game. The CBF also emphasizes that at no time, through its interim president … or its officials, did it interfere at any point in relation to the health protocol established by the Brazilian authorities regarding the entrance of individuals in the country.”

Reports indicated that the four players in question — Emiliano Martinez (Aston Villa), Emiliano Buendia (Aston Villa), Cristian Romero (Tottenham Hotspur) and Giovani Lo Celso (Tottenham Hotspur) — were required under Brazilian regulations to complete a 14-day quarantine after traveling from the United Kingdom. ANVISA issued a statement on this topic in the days leading up to the match, but Argentina proceeded as normal and three of the players were included in Argentina’s starting lineup against Brazil.

There’s an argument that Brazilian health officials made their position clear and public and the Argentine side ignored it. ANVISA’s president believes this to be the case. Argentina’s head coach, meanwhile, claimed that they were never told they couldn’t play the game. Others have reported that FIFA and CONMEBOL officials stepped in to assure that there would be no problems and that an exception could be made for the four players since they were part of the Argentine bubble. Either way, it’s unclear why the issue wasn’t resolved prior to the teams taking the field.

“It wasn’t the moment to do it, and it leaves us very said,” Argentina head coach Lionel Scaloni told TyC cameras. “If [ANVISA] people come in saying that they want to take [players] away and deport them, there’s no chance [that happens]. In no moment were we told we couldn’t play the game. The CONMEBOL delegate told us to go to the locker and that’s what I did … We’re the victims in the sense that we wanted to play. The Brazilian players wanted to play, too.”

“ANVISA considers the situation a serious health risk and so has asked local health authorities to determine the immediate quarantine of the players, who are stopped from participating in any activity and should be prevented from remaining on Brazilian soil,” ANVISA said in a statement.

ANVISA stated that the four players misrepresented their travel details in official travel documents, omitting their trip from the United Kingdom. The four players traveled with the Argentine team to Venezuela on Thursday, and Martinez and Lo Celso played in the team’s 3-1 qualifying win over Venezuela. The Argentine team then traveled from Venezuela to Brazil and the players were in the country for three days prior to the match.

“We’re not talking about a lie or anything,” said the Argentine federation president Claudio Tapia, “because there are health rules under which FIFA qualifiers and all South American tournaments — Copa Libertadores and Copa Sudamericana — are played and which all the health authorities of each country approved. It’s a protocol that is in effect and the 10 federations worked on together, and we’ve been complying with it.”

Brazil’s national team have not faced the same quarantine issues since its nine England-based players did not travel to South America after the English Premier League announced it would not release players to play for countries traveling to destinations on the UK’s red list. That would have required a mandatory 10-day hotel quarantine upon their return that would have resulted in players missing club matches. Argentina’s four players defied the Premier League and traveled all the same, with the understanding that they would return to England early to complete the quarantine.

The Brazil-Argentina rivalry match was highly anticipated as a rematch of last July’s Copa America final. Argentina won that game 1-0 at Brazil’s Maracana Stadium and Lionel Messi won his first major title with Argentina’s senior national team. Sunday’s match was originally scheduled to be played in March 2021, but it was postponed because of the COVID-19 pandemic. South American authorities added a matchday in September to squeeze in one of the matchdays that had to be rescheduled.

Depending on whether the media outlet is based in Brazil or Argentina, there has been plenty of speculation as to whether one of the teams might be punished for its role in the suspension of the match. One side says that Brazil could be sanctioned for government officials invading an official match, while the other side says that Argentina could be penalized for leaving the field.

Below is a rundown of the events as they happened. Sporting News was following the event and provided real-time updates and commentary:

Brazil vs. Argentina updates and highlights

4:12 p.m.: Incredible. Now Brazil is holding a scrimmage among their players on the field. This game is definitely not resuming.

3:58 p.m.: And now the official word from the South American governing body CONMEBOL. The statement says the suspension is a decision by the referee. It’s an interesting choice of language because there could be repercussions for a government authority invading the field and interrupting an official match.

3:34 p.m.: According to Argentina’s official national team account, the match has been suspended:

3:32 p.m.: Outside of the obvious, the biggest question at this point is why the players were allowed to take the field to begin with. The officials had ample time to resolve the situation:

Argentina have been in Brazil for 3 days and the Brazilian health agency decide to storm the pitch and stop the match.

The best player of our generation, in a photographers bib, negotiating with health authorities to get this game back on track

3:24 p.m.: This reporter claims that Argentina ambassadors in Brazil are stepping in to help resolve the situation:

3:23 p.m.: Cameras are capturing Messi talking to Dani Alves and Messi is already in a bib. He took off his jersey. And now he’s on the field talking to Neymar and Brazil coach Tite:

3:21 p.m.: The Brazilian players still haven’t left the field. The health officials are not seen on the field and it seems like the conversation has progressed into the lockers.

3:19 p.m.: The rules in Brazil require that travelers from the UK need to quarantine. There are reports that the four players lied about traveling from the UK (they traveled from the UK to Venezuela, where Argentina played on Thursday).

3:18 p.m.: How will this get resolved? Argentine media claim that the team will not be playing unless all the players are permitted to play.

Brazilian police arrived to detain all 4 players that arrived from England, crazy. pic.twitter.com/bXFszQlPyz

8th min.: Plenty of discussions happening at the sidelines and Lionel Messi is now involved.

6th min.: And the cameras turn to the sidelines where Brazilian officials look to be intervening. There were reports that health officials were seeking to force Argentina’s four England-based players to leave the match after they didn’t comply with mandatory 14-day quarantine rules for travelers from the UK. The word was that the issue was resolved, but apparently not.

4th min.: And now it’s Argentina’s Cristian Romero with a tough tackle on Eder Militao that sends the player flying. And Neymar is not happy. Sparks are already flying.

1st min.: We’re off and we already have a player getting a talking to from the referee in the first minute!

15 seconds and Gerson sends in a foul to Lo Celso. Welcome to Brazil-Argentina 🔥

2:57 p.m.: This rivalry is way too friendly when it comes to the two biggest stars:

2:57 p.m.: It’s been eight straight games that Brazil hasn’t given up a goal at home during qualifying:

Brazil starting center back Marquinhos will be out due to suspension after picking up his second yellow card against Chile. His replacement at center back will be Benfica’s Lucas Verissimo , who will be making his debut.

Tite is also opting to bring in Everton Ribeiro in place of Vinicius Jr. , whose speed could make for a solid attacking option off the bench. Gerson , who subbed in for Bruno Guimaraes against Chile, starts alongside Casemiro in central midfield.

Argentine coach Lionel Scaloni gets Cristian “Cuti” Romero and Leandro Paredes back from suspension, and they’re both slotted into the starting lineup. He’s also giving Gonzalo Montiel the start over right back Nahuel Molina .