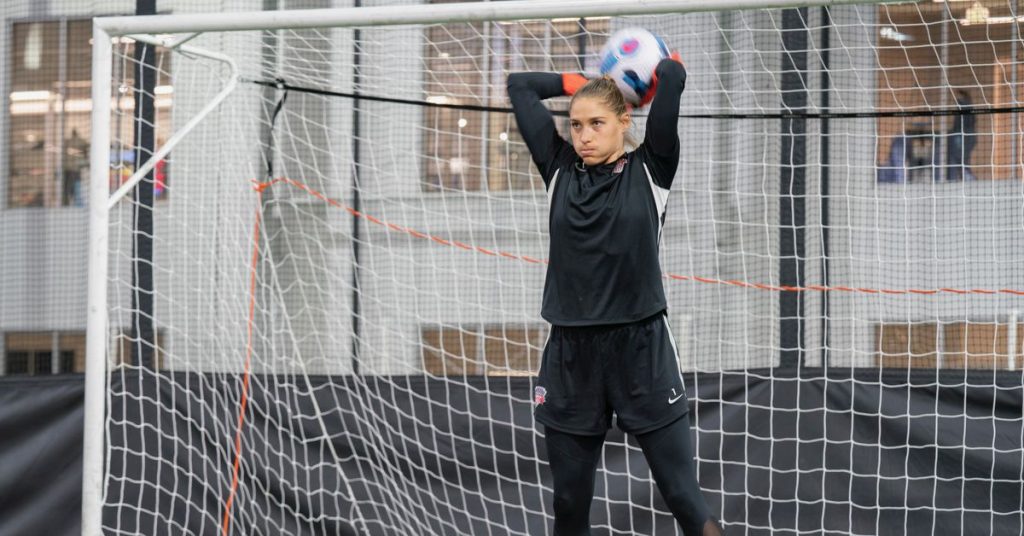 With the February weather in typically miserable form, the Washington Spirit continued the early phase of their preseason work Friday at Springfield’s sprawling behemoth of an indoor facility, The St. James. While the defending champions haven’t even had five full sessions on the turf, Friday’s training had the focus and familiarity most teams would hope to see mid-season.

Here’s a breakdown of the news and notes from pitchside:

Nearly every player under contract with the club could be seen somewhere during the session. Out of the 26 players on the roster already, three were not on the field. Jordan Baggett (née DiBiasi) just returned from her honeymoon this week, and was undergoing her entrance physical before joining the team’s workouts. The only absentees were Kumi Yokoyama and newcomer Alia Martin. Per the Spirit, Martin will join the team in the near future while getting her affairs settled and relocating, while Yokoyama’s absence was not specified.

That said, not every player was training at full speed. The Ashleys Hatch and Sanchez worked out on the side, getting touches in before hopping on exercise bikes. According to the team, both players are healthy, and the move was simply made with load management in mind. Hatch and Sanchez were part of the USWNT’s January camp, and both players were called in for the SheBelieves Cup later this month. The only other player to watch from the side was Tori Huster, who is roughly three months into her rehab process after suffering a torn achilles tendon during the playoffs.

“Everyone that’s come in has brought a good energy, and I think that’s what happens when you have a championship team,” said Hatch after training. Asked by reporters if she felt as if the team had a target on their backs now, Hatch said the Spirit are looking at it simply as having “a higher standard and expectation for ourselves” going into the year.

“So far, so good,” added goalkeeper Aubrey Kingsbury (the player formerly known as Aubrey Bledsoe). “I think we’ve got more intensity than we did last year, so off to a good start.” Kingsbury added that having less turnover on the roster and technical staff allows them to build from day one. “We know each other, so it’s like ‘Let’s get to work!’”

Bayley Feist and Averie Collins both missed last season due to torn ACLs, but the duo trained with with no apparent restrictions. Collins was hurt just days before players reported to training camp, while Feist’s injury came in the early stages of the Spirit’s preseason finale last year against a Sky Blue FC team that was days away from their rebrand to NJ/NY Gotham FC. During the playoffs, Feist was far enough along in her rehab that she was able to sprint, cut, and do some limited ball work to the side of Washington’s practices. Collins, meanwhile, had to undergo a minor follow-up knee scope to clean out scar tissue.

Both players add a new dimension to the Spirit’s attack. Feist seemed poised for a breakout season in her third year as a pro, and was even starting ahead of Trinity Rodman while the team toyed with the idea of playing a 3421 formation. Speaking after training, Ward noted that Feist “does so much for us, and we don’t have a like-for-like replacement” for the versatile 24 year old who scored a goal during a lengthy small-sided game.

Collins, meanwhile, brings power and directness to the forward line. With Ward mentioning a desire to be able to more consistently press teams higher up the field, and a roster full of players able to deliver long-range passes from deep positions in behind defenses, she figures to be the sort of wild card the Spirit didn’t necessarily have up front last year.

While Baggett was not training with the group, Ward made a point to bring her return up as well. Baggett did play last year, appearing in three games early in the regular season, but her last game in uniform was August 7’s 1-0 loss to Portland at Segra Field. Offseason hip surgery was followed by at least one setback, and she spent the stretch run rehabbing away from the team.

However, before her injury, Baggett was on the USWNT radar, and Ward hasn’t forgotten what she brings to the table. Referencing Baggett’s 2019 rookie season, Ward said “She was one who lead the team in the pass that lead to the assist. She was the best in terms of breaking down the game for the team in that way.”

Lee Nguyen, a longtime MLS standout with nine USMNT caps to his name, announced his retirement from professional soccer on Friday to become a full-time assistant with the Spirit. Last season, Nguyen — who initially joined the Spirit on a short-term basis while his club side, Ho Chi Minh City FC, was on hiatus as the Vietnamese top flight paused play due to the pandemic — and Annie Worden were hired after the mid-season suspension (and eventual dismissal) of Richie Burke left the team with only Ward and goalkeeper coach Paul Crichton on the books. During the playoff run, Ward and multiple players noted in-game adjustments from Nguyen that helped the team en route to their first-ever championship.

Currently, the Spirit appear to be moving forward with a coaching staff of Ward, Crichton, and Nguyen. Washington concluded their session with a round of applause for Nguyen now that his move into coaching is official.

On the training side, the team has hired head athletic trainer Alessandro Ciarla and assistant athletic trainer Summer Jones on a full-time basis. Last year, the pair joined the club mid-season, but the arrangement involved subcontracting via Inova Health. Now, both work for the Spirit directly, which means Washington’s players are their full focus.

Washington drew some raised eyebrows by signing former USWNT goalkeeper Nicole Barnhart just before the start of preseason. With Kingsbury, Devon Kerr, and Sydney Schneider all back for this season, fans were quick to ask why the team would carry four goalkeepers. Not only that, but the Spirit then brought former NC Courage GK Samantha Murphy in for a preseason trial.

At the time, Washington’s rationale appeared to be based on international call-ups: Kingsbury has received consecutive camp invites from Vlatko Andonovski, a sign she has climbed up the USWNT depth chart after last year’s NWSL Goalkeeper of the Year season. Schneider, meanwhile, has been consistently called in by Jamaica and is often the starter for the Reggae Girlz. With this being a World Cup qualifying year, both national teams figure to be busy.

However, there’s an added wrinkle that only serves to underline the need for the move, which brings us to our next topic:

Ward said that the Spirit will have 11 players leaving camp for national team call-ups in the February FIFA window, which begins next week. The USWNT will be responsible for most of that, with six players on the SheBelieves Cup roster and Trinity Rodman joining them as a training player.

The other four are not confirmed, but it’s not difficult to deduce three:

As has been discussed, Schneider has been called up whenever possible by Jamaica in recent years. Defender Karina Rodríguez holds a similar position for Mexico, and may in fact be starting due to center back Jocelyn Orejel likely being out due to a broken nose). The story is the same for Julia Roddar and Sweden, whose spot with the silver medalists appears to be very solid.

Don’t be surprised if those three bring the total number of departures next week up to the ten. So…how do we get to eleven? Let’s put this segment and the last segment together. We’d need a player who hasn’t been a regular for their national team…and the Spirit felt their goalkeeper shortage was enough to sign a fourth player.

We know the USWNT hasn’t recalled Barnhart to add to her 54 caps, which brings us to Devon Kerr. Kerr hails from Barrie, Ontario, but is eligible to represent both Canada and the U.S., and has played in the youth national team programs of both countries. Canada, meanwhile, is about to have an opening: Stephanie Labbé announced her retirement, which is coming up later this spring. The Canadians still have Kailen Sheridan, Erin McLeod, and Sabrina D’Angelo in their pool, but McLeod is 38, and having a three-player pool means no serious competition to get called up.

Just saying, keep an eye on the next Canada roster.

Three of the team’s five college draft picks were present. The team previously announced that second round pick Maddie Elwell will finish the spring semester at Vanderbilt, while the Washington Post’s Steven Goff reported last night that defender Jordan Thompson suffered a knee injury during Thursday’s session, with the team awaiting the result of an MRI.

Tinaya Alexander, Lucy Shepherd, and Audrey Harding were all present, though, playing attacking roles in a 9v9 game played with one goal moved to midfield to compress space.

Much was made of the Spirit’s 38-player preseason roster, as no other team in the league had plans to carry that large of a squad. However, on the day, Murphy was the only trialist present. Washington says the other seven trialists will arrive next week.