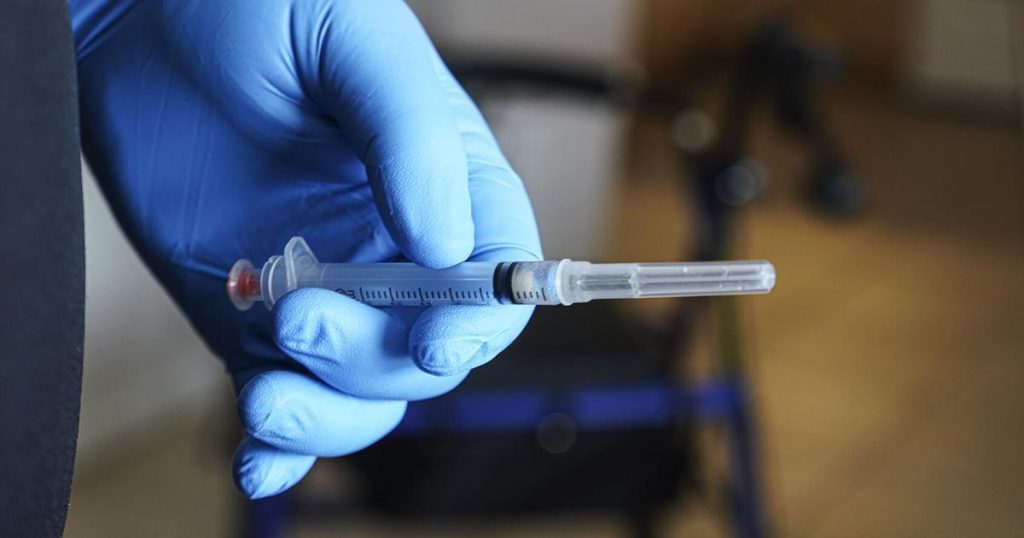 And yet a backdraft of skepticism persists.

Thousands of New Mexico residents still haven’t registered to obtain coronavirus shots, though the state is among the leaders in the country in the percentage of those who have acquired them.

Despite the apparent success vaccines have had in bringing down infection rates, shots, coronavirus tests and masks remain sticky subjects for some in New Mexico and nationwide.

A Santa Fe attorney who represents clients opposing mandatory shots and other coronavirus-related directives said she is convinced the vaccines harm people and that the pandemic has been overblown by authorities and the media.

“No, it’s not conspiracy mongering at all,” said Garner, who opposes coronavirus-fighting tactics for many reasons, including her contention that individual rights are being trampled.

The vaccines have been rushed to the public without animal testing, she said. She noted vaccines continue to be deployed under federal “emergency use authorization.”

Others who say they won’t get the vaccine or have reservations aren’t as strident as Garner but offer arguments that touch on the same concerns.

Among Garner’s clients are New Mexico residents who have sued the state over public health orders. Another sued Doña Ana County over being required to get the vaccinations to keep working at the detention center there. And more lawsuits are coming, she said.

Garner called Dr. Anthony Fauci, director of the National Institute of Allergy and Infectious Diseases, a liar. She said she has experts, evidence, science and research on which she bases her opinion.

A University of Arizona professor of public health chuckled as he considered some of those arguments. Dr. Daniel Derksen, director of the university’s Center for Rural Health, said the vaccines are effective and carry little risk.

“Those are the facts,” Derksen said. “They’re indisputable.”

The data comes from the Centers for Disease Control and Prevention, other organizations and expert-reviewed medical journals, he said, such as the Journal of the American Medical Association and the New England Journal of Medicine.

Derksen said the numbers are convincing. Some 32 million Americans have contracted the disease and more than 570,000 have died from it, according to federal statistics. About 235 million vaccinations have been administered in the United States alone.

“The science of diagnosis and monitoring has evolved quickly,” he said. “This has been a devastating infectious disease.”

A Santa Fe physician said that with more than 1 billion doses of coronavirus vaccines given worldwide, the ability to observe and research their effects has been unmatched in the history of vaccines.

“We are tracking this like we have never tracked anything before,” said Dr. Wendy Johnson, chief medical officer at La Familia Medical Center. “Every country around the world is studying this.”

For her part, Garner said the pandemic is “about as bad as a bad flu season.” The inaccuracy of coronavirus testing has helped boost the numbers, she said. And people who have died in hospitals with traumatic injuries and other problems have been counted among coronavirus deaths, she said, because they tested positive for the disease.

Derksen estimated the coronavirus is 10 to 20 times more deadly than the flu. Roughly 20,000 to 40,000 Americans die annually from the flu, he said, and the American death count attributable to the coronavirus is about 575,000 over somewhat more than a year.

Garner pointed to the Vaccine Adverse Event Reporting System, a federal program in which doctors, patients and family members can report reactions to vaccines. The CDC said the reporting system found 3,848 deaths following coronavirus vaccinations as of April 26.

The VAERS website says self-reported descriptions vary in quality and completeness and don’t show that the vaccine caused the deaths or side effects — only that they came sometime after the vaccination.

The CDC said: “A review of available clinical information including death certificates, autopsy, and medical records revealed no evidence that vaccinations contributed to patient deaths.” The CDC says coronavirus vaccines are safe and achieve the objective of diminishing the disease.

Johnson said the CDC and others “are analyzing all this data on literally a daily basis and have not seen higher mortality rates associated with those who get the vaccine.”

The Lancet in Britain recently published a study of 627,383 people vaccinated against the coronavirus and found headache and fatigue to be the main side effects. No deaths were mentioned.

A statement last week from the state Department of Health said the reluctance of some to be vaccinated is understandable considering “all the noise, myths, misinformation and outright lies about this and any other vaccine seen regularly on social media.”

To some degree, the vaccination program has become a political issue. The Kaiser Family Foundation reported that as of March, 79 percent of Democrats had either gotten the vaccinations or wanted to as soon as possible. But only 46 percent of Republicans responded that way.

Bob Graham of Santa Fe, a leader of the New Mexico Republican Party, said he blamed both political parties for a “great divide” over the matter.

“It’s unfortunate it’s become” a political issue, he said. “It shouldn’t be.”

The two parties should work together to find best practices, he said, but instead are intent on pursuing different agendas.

Graham, 68, said he hasn’t gotten his coronavirus vaccinations and hasn’t decided if he will. He said he feels “nonchalant” about it and in no rush.

“This is an issue of health and individuals’ choices,” he said. “I’m not overly concerned about it.”

A 30-year-old Albuquerque man who declined to be named because he said it could jeopardize his job mentioned several reasons for declining the vaccinations.

“It’s not that I’m against the vaccination,” he said. “I’m against being told I have to get it.”

He also said he is healthy and that he would worry the vaccine might cause severe effects years from now.

He noted the science has morphed on how long the droplets on a surface might retain the virus and how close one must be to contract it from another person.

“We hear new stuff every other day,” he said.

Anthony Martinez, a 52-year-old student and employee at Santa Fe Community College, said he wears two masks but isn’t convinced that getting the shots is a good idea. The one time he got a flu shot, he said, “I was sick for three-and-a-half months.”

He also said he has no confidence that the coronavirus vaccinations will protect him. “If the strain changes, then the shot needs to change with it,” said Martinez, who doesn’t align with either party. “Will I take the shot in the future? It’s probably going to have to be a mandate.”

Mutations and variants of the coronavirus worry doctors and scientists as well. Dr. David Scrase, secretary of the state Human Services Department, said recently that variants are “an important phenomenon” to track.

“There’s a lot of concern about variants,” he said.

Louise Lasley, a 74-year-old Santa Fe resident who recently received her second shot, said it’s baffling that a segment of society takes the word of dubious sources over that of public health administrators. “I find that so hard to get my head around,” she said.

Lasley, a retired geologist and public lands official, said you can always dig around and find sources that confirm your biases. “They’re out there, I’m sure, for everything,” she said.

She expressed relief that she is fully vaccinated now. She still wears a mask to be cautious.