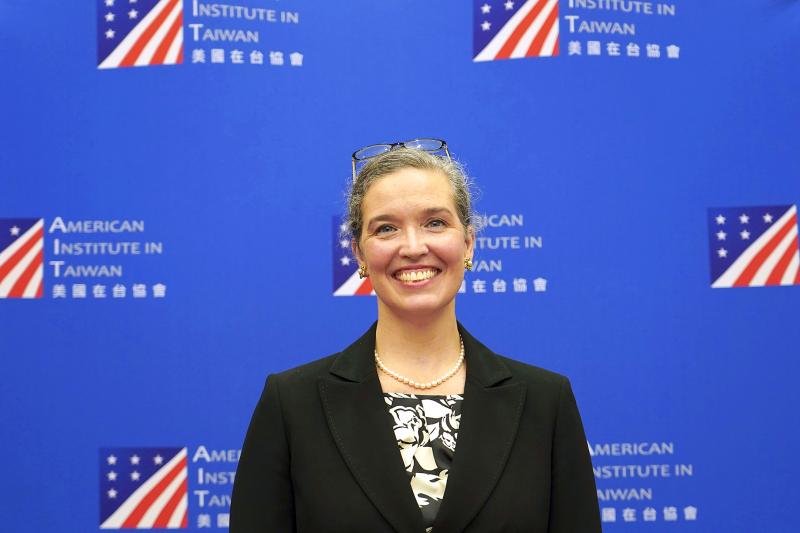 JOINT EFFORT:
Oudkirk said Washington would continue looking for ways for Taiwan to join international conversations and hopes local firms will invest more in the US

In her first six months as American Institute in Taiwan (AIT) director, Sandra Oudkirk has overseen a productive period in Taiwan-US relations.

In a Jan. 26 interview with the Liberty Times (the Taipei Times’ sister newspaper) she discussed the US’ dedication to ensuring that Taiwan’s voice is heard, and addressed heightened security concerns and the expansion of the Global Cooperation Training Framework (GCTF).

The economic partnership between Taiwan and the US has taken significant strides recently. Oudkirk said that looking at the trade and economic space, “we are already in a really good place.”

“In 2020, Taiwan was [the US’] ninth-largest trading partner overall, and our seventh-largest consumer of agricultural goods. Only Canada and Mexico consume more on a per-capita basis of US goods, services and products than Taiwan does,” she said.

Asked what kind of trade barriers exist, and what Taiwan could do to step closer to a free-trade agreement, Oudkirk said: “Of course, whenever you have a close relationship, there will be obstacles, right? Nothing is ever perfect, but the obstacles that we have I would say are manageable. They’re primarily technical in nature.”

“We would love to see Taiwanese companies invest more in the United States. We would love to see and are ready to work on increasing Taiwanese consumers’ confidence in American pork products,” she said. “Now that we’re through the referendum, there are a bunch of other issues related to technical certifications for various kinds of devices, but that’s all stuff that we work on all the time.”

Asked if there are any new strategies regarding Taiwan’s exclusion from international organizations, Oudkirk said that the US “has been very clear over the years.”

“We think that Taiwan is a force for good in the world and has a lot of value to add, particularly in technical topics like international public health, pandemic prevention, humanitarian assistance and disaster response,” she said.

“We have consistently advocated for Taiwan to play a meaningful role in the international system, including within the UN framework,” she added.

“Do we have new options or opportunities? I can’t really get into the nitty-gritty of our discussions with Taiwan on this, but I can say that I think one thing that the [US] administration has really stressed hard is the importance of working closely with allies and partners,” Oudkirk said.

“We will continue to look for ways that Taiwan can input into international conversations, whether it’s in smaller groupings or whether it’s at events that the US hosts or organizes, like the recent Summit for Democracy, so that Taiwan’s voice can be heard,” she said. “The Global Cooperation Training Framework initiative I think has been really successful, so successful that it’s actually becoming hard to manage.”

On whether the GCTF is expanding, Oudkirk said: “We expect to see more areas added to the discussion.”

“I think some of the topic expansion has come organically from the interest of the countries. Say a particular country has a successful cooperation with Taiwan in a specific area. That’s what they want to highlight, right?” Oudkirk said.

“Now, because of the [COVID-19] pandemic, very few GCTF events have been held face-to-face. They’ve mainly been virtual events, which is good and bad,” she said. “As we look forward to the eventual end of the pandemic and the return to more normal travel, one of the challenges that the GCTF organizers will have is going to be how to figure out the balance between in-person and virtual.”

As for how US-Taiwan security cooperation could be furthered, Oudkirk said that security is a key part of the work that the AIT does.

“We’re working within the US’ ‘one China’ policy, which is long-standing and has bipartisan support in the United States,” she said. “We’re in constant contact with the Ministry of National Defense, the Presidential Office and other stakeholders here in Taiwan to talk about the threat environment and what can be done to counter it.”

Asked for her opinion on the matter, Oudkirk said: “Now, the Winter Olympics happens every four years. This sort of illegal Crimea action by Russia only happened once. It’s an anomaly. And we see that Russia’s relationship with Ukraine in particular is extremely fragile and problematic. It is to my mind not linked to the Olympics in any way.”

“Taiwan is a very large, extremely globally significant economy, and so Taiwan plays a different role. There may be some similarities in terms of malign influence from a neighbor, but there are many differences as well,” she added.

After attending the virtual Summit for Democracy led by the US last month, Taiwan drafted a list of 62 promises.

“Taiwan has really taken to heart the spirit of the Summit for Democracy and the call for the ‘year of action.’ I don’t have a response on the specific measures that they proposed, but in terms of the overall thrust of the idea, I think Taiwan is definitely in the right place,” Oudkirk said. “I hope Taiwan’s example inspires other participants to be equally as ambitious.”

Comments will be moderated. Keep comments relevant to the article. Remarks containing abusive and obscene language, personal attacks of any kind or promotion will be removed and the user banned. Final decision will be at the discretion of the Taipei Times.