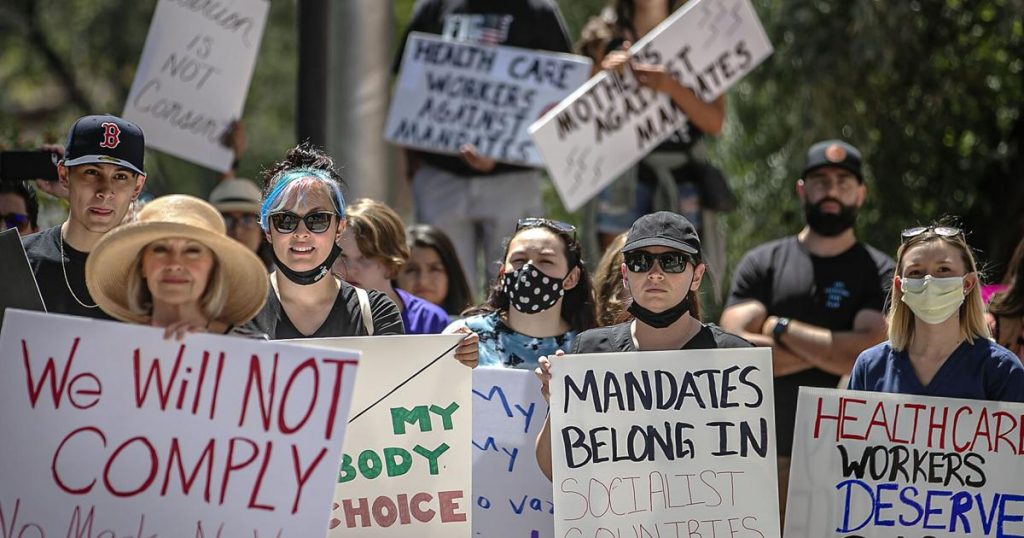 Todd Winder is in a tough spot.

The administrator of Fort Bayard Medical Center and a state veterans home near Silver City has about 60 job openings and is facing the possibility of losing more staff from his workforce of about 270 in a matter of days.

A state mandate that requires hospital and other employees to receive their first dose of the COVID-19 vaccine by Friday could leave an unknown number of people unable to do their jobs if they don’t comply with the order or qualify for an exemption.

Winder said the vaccination rate among his employees stands at 81 percent. He expects the number to grow “some but not significantly” before Friday’s deadline.

“We’re currently understaffed in most areas, and if more people have to be let go, it’s only going to make that worse,” he said in a telephone interview Wednesday.

The vaccine mandate, part of the state’s larger effort to slow another surge of the virus and protect lives, has sparked political attacks among the state’s top elected leaders, a lawsuit questioning the constitutionality of such an order and protests, including one in front of the state Capitol last week and in Albuquerque and Las Cruces on Wednesday.

The order is also generating concerns about the impact on hospitals already grappling with staffing shortages, a long-running problem, as well as burnout and fatigue among health care workers amid an ongoing pandemic that is once again squeezing New Mexico’s network of hospitals.

It’s unclear how many health care workers will refuse to comply with the mandate.

“We’re operating in the mindset that our hospital and health care workers will get vaccinated,” he said. “Not all [hospitals] have shared their numbers with me, but for those that have, most of our facilities are well over 80 percent, even 90 percent, of their workers being vaccinated.”

But, Clark said, there is a “core that’s been resistant” to getting vaccinated, partly “because of the politicization [of the issue and] others due to uncertainty or lack of education.”

Clark said it’s concerning there are health care workers who have indicated they would rather quit than get vaccinated.

“Obviously, this would reduce the number of caregivers that are available to give care for the patients who need care, as well as those who may unexpectedly need care,” he said. “Forget the pandemic. Every day, people end up in an emergency room or in a hospital they didn’t plan to.”

During a virtual news briefing Wednesday, Dr. David Scrase, the state’s human services secretary and acting secretary of the Department of Health, said the state is “on track” to start rationing care in the next week.

“The way it works is, cases go up first, then hospitalizations go up after that,” said Scrase, who also said 50 people are on a waiting list for a bed in an intensive care unit.

“It is a serious situation right now,” he said. “These people are all just the kind of people you imagine who need an ICU bed and they need it now, and we don’t have that capacity.”

Clark said some hospitals in New Mexico “are actually extremely full right now with non-COVID-related patients” who need care that was deferred during the pandemic or are experiencing medical emergencies.

“It’s a critical situation,” he said. “Every one of our hospitals, I would tell you, across the state, their number one issue right now is staffing. It is not COVID. It is staffing.”

Clark did not have specific vaccination rates for each hospital in New Mexico. Of those he has been in communication with, he said it ranges from just over 70 percent a few weeks ago to more than 90 percent.

At Christus St. Vincent Regional Medical Center in Santa Fe, more than 90 percent of employees have been vaccinated so far, spokesman Arturo Delgado wrote in an email.

“CHRISTUS St. Vincent will follow the [New Mexico Department of Health] mandate and will require that all employees receive the vaccine, unless they provide a valid medical or religious exemption,” he wrote. “Employees who do not have an exemption or who do not submit results can be placed on leave until they provide one or get a vaccine. If they don’t do either, they will be separated from employment.”

Delgado said the loss of employees, if any, will not affect Christus St. Vincent’s operations.

At Presbyterian Healthcare Services, New Mexico’s largest private employer and largest health system with nine hospitals across the state, the “vast majority” of the workforce is vaccinated, spokeswoman Amanda Schoenberg wrote in an email.

“We know the number of vaccinated workforce members will continue to climb prior to the Aug. 27 mandate deadline,” she added.

Schoenberg said employees who don’t qualify for an exemption will be placed on a personal leave of absence for up to four months.

“We continue to be encouraged by the increased number of staff members that are getting vaccinated this week as data shows that vaccines are our most effective tool in ending the pandemic,” she wrote.

The state’s top health officials said during Wednesday’s news briefing that nearly 90 percent of COVID-19 cases, hospitalizations and deaths to date are among unvaccinated New Mexicans.

“The take-home message … is that we have a very, very, very highly effective countermeasure or tool to use to fight this pandemic,” said Dr. Christine Ross, the state epidemiologist.

Asked how many hospital workers won’t comply with the vaccine mandate and how it might affect staffing levels, Scrase said he didn’t know but that it varied by profession.

“Many hospital systems just required every employee to do it, but the closer you are to patients, the much higher the vaccination rate is; so doctors, I think, tend to run 98 percent, nurses over 90 percent, aides last,” he said. “We’ve made good progress in nursing homes with nursing home staff. They’re over 70 percent now.”

Paula Aragon, a spokeswoman for the New Mexico Veterans Affairs Health Care System, said 93 percent of its workforce is vaccinated.

“We do have numbers that are increasing with people taking the vaccine,” said Aragon, who didn’t know the fate of employees who refuse to be vaccinated.

Clark said hospital CEOs are committed to following the order.

Deborah Walker, executive director of the New Mexico Nurses Association, said her organization is among several that believe health care workers should be vaccinated if they’re going to provide direct patient care.

“Where there are preventable diseases, nurses should be vaccinated — period,” she said. “They have a duty to the community health, to the individual’s health, and there are no exceptions.”

Walker said there’s “a very small percentage of nurses in the state and nationally” who have taken a stance against the vaccine.

“We are there to serve, and you cannot impose your belief system on your patients,” she said. “So if that is your belief, then fine, but find employment where you’re not going to be coming into direct contact with the patient.”

In addition to causing concern among health care workers, the vaccine mandate also has created deeper divisions between Democrats and Republicans, some of whom support individual choice.

“I stand with these health care workers who, during the early months of COVID, showed up day in and day out while the governor worked from her mansion,” said state Rep. Rebecca Dow, a Truth or Consequences Republican who is running for governor. “These medical employees know their bodies and the risks involved. They deserve the right to choose.”

Responding to a tweet from the Republican Party of New Mexico, Egolf fired the first salvo, saying Townsend and other members of the GOP were “working to undermine efforts to vaccinate New Mexicans and protect kids by wearing masks: SHAME!”

Townsend fired back Wednesday, calling Egolf “fake” and writing that Egolf’s “dedication to the mask is most important when the camera is on” but not when the cameras are off.

“I believe Freedom important too, you not so much. That is your shame!” he wrote.

“The price of your hollow claims of ‘freedom’ is measured in deaths of children & ICU beds filled w/kids fighting for their lives. I expected more from you,” Egolf tweeted.

Townsend responded that he respected parents’ ability to make the right decisions.

“You and Gov MLG are afraid to trust New Mexicans,” he tweeted. “I’ll continue to represent the values of all New Mexicans while you play politics with their lives.”