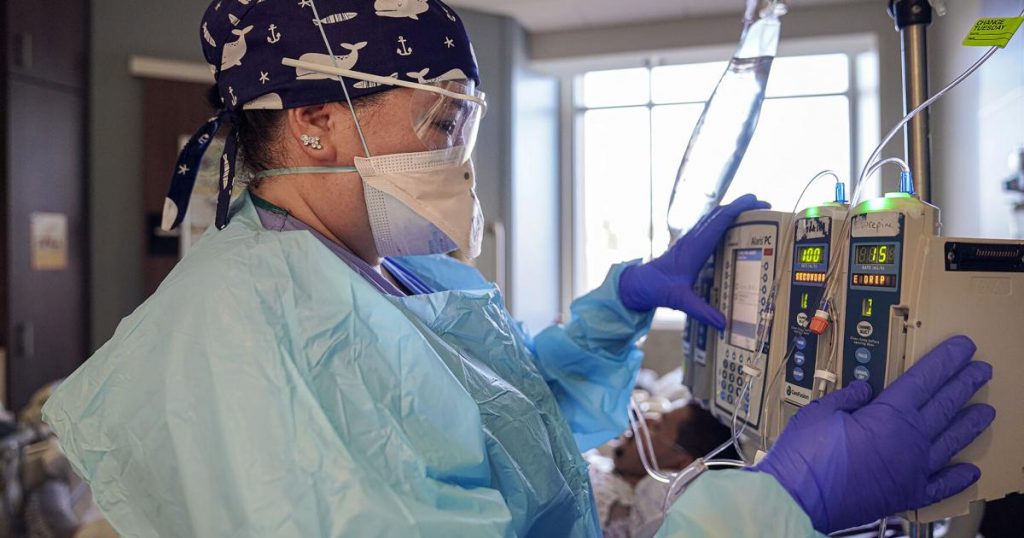 Hospitals in New Mexico are so overwhelmed with COVID-19 patients they might have to begin rationing care, state public health officials said Wednesday.

The move, known as implementing crisis standards of care, could come as soon as early September.

On Wednesday, 433 patients were hospitalized statewide for COVID-19, a 23 percent increase from Monday. Around 50 people were on a waiting list to get a bed in an intensive care unit, something the state has never had to do before. And over the next two weeks, health officials expect hospitalizations to increase 20 percent to 30 percent in New Mexico.

“Our hospitals are virtually full,” Dr. David Scrase, the state’s human services secretary and acting secretary of the Department of Health, said during an online news conference Wednesday.

The state is on track to reach crisis standards of care in the next week “unless something unanticipated changes,” Scrase said.

Such a declaration would mean “we no longer have enough resources to take care of everybody and we’re going to have to make decisions about who gets an ICU bed,” he added.

The latest surge in infections has been fueled by the delta variant, a more contagious strain of the virus that has caused widespread outbreaks in communities with low vaccination rates.

The last time health officials were considering implementing crisis standards of care was in early December, when hospitalizations soared to more than 900 statewide. Although medical facilities have fewer COVID-19 patients than they did during the surge last winter, the issue has been compounded by a nursing shortage.

As nurses have retired, not enough students have stepped in to fill those jobs, especially at hospitals in rural areas. And the stress the pandemic has put on the medical profession has caused some health care workers to quit.

“That’s something we’re working on,” Scrase said of the nursing shortage. “Everyone in the nation has this problem with not enough nurses right now.”

The other issue is hospitals are treating more non-COVID-19 patients than they did during previous surges.

“Some of that is due to delayed care — folks who didn’t go to medical systems and see their doctors for a year or more now showing up with much more critical illnesses due to lack of diabetic care or care for their heart disease or their blood pressure,” Scrase said.

“We don’t have room for those folks,” he added. “And we are doing everything we possibly can to make more room, but we are just running out of rooms and of course staff to take care of patients.”

Computer modeling indicates New Mexico could see between 1,300 and 1,500 new cases of the coronavirus a day in the coming weeks, Scrase said.

On Wednesday, New Mexico reported 770 additional infections. A little more than a month ago, the state’s daily case count was often below 100.

The state’s modeling shows the delta variant surge could level off by mid-September, Scrase said.

“But I think that’s too far out to really call, and a lot of the modeling depends on public response to the increased number of cases,” he said, such as more diligent mask-wearing and more vaccinations.

Counties in the state’s far southeast corner have been hit especially hard by the delta wave. Though its population is just under 75,000 people, Lea County has been averaging more than 100 infections a day for the past couple of weeks. On Wednesday, its vaccination rate was 44.5 percent. Statewide, nearly 67 percent of eligible residents were fully vaccinated.

Dr. Christine Ross, the state epidemiologist, encouraged people to get vaccinated if they haven’t already. During Wednesday’s news conference, she pointed to data from the state Department of Health that showed nearly 90 percent of new cases, 92 percent of hospitalizations and almost 97 percent of deaths in New Mexico since February were among unvaccinated residents.