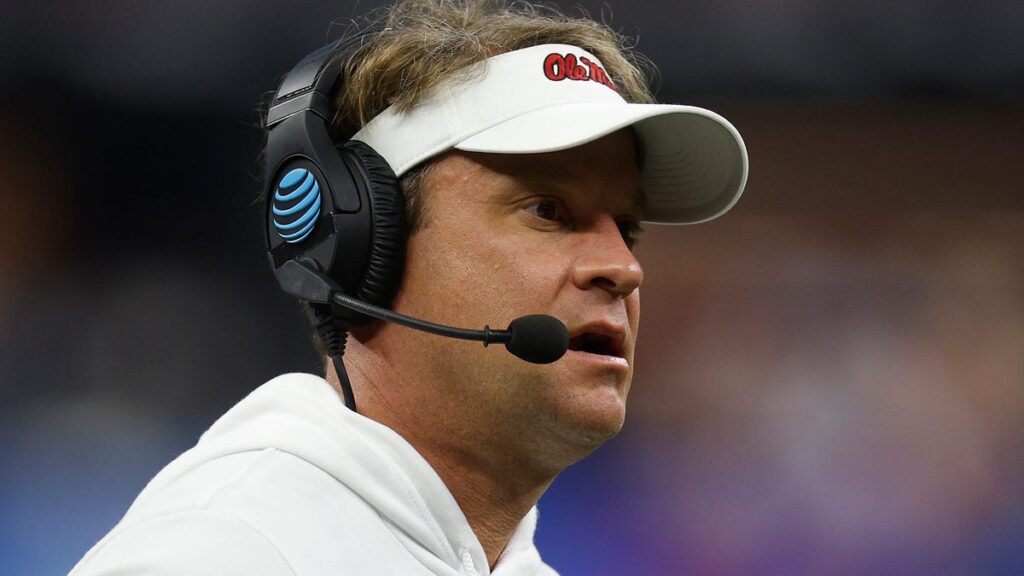 Cue up the world’s tiniest violin — Lane Kiffin had the latest anti-NIL take yesterday. He was up in arms at Ole Miss’ signing day press conference earlier today about Jimbo Fisher having the top incoming recruiting class, saying “We don’t have the funding resources as some schools with the NIL deals … Somehow, they’re going to have to control NIL. You’ve got these salary caps, giving players millions to sign before they play and other places not able to do that.”

It gets more annoying every time we hear it. Schools throughout the country have wildly differing budgets for all manner of things: recruiting, coaching staff, facilities, gear, technology — the list goes on. Coaches are getting paid eight-figure salaries. Kiffin himself makes over $7 million a year. Boosters donate heaps of money for new stadiums, new practice fields, new locker rooms, new dining halls, new everything, to help recruitment to their alma mater’s football programs — a phenomenon particularly common across the south — and yet the imbalance we want to address is the kids getting paid.

You can twist it any way you want, but when it comes down to it, Kiffin is taking umbrage with a single imbalance in the diversified field of recruiting: the athletes’ ability to make money off of their own work. I don’t see him asking for a cap on coaching salaries. No, just the kids. They must be punished because he wasn’t able to recruit the athletes he wanted to.

It feels like a preemptive excuse in case the Rebels don’t play well over the next few seasons. They lose to A&M, Kiffin can just point and say, “well, I told you so. We just can’t compete with a school with a budget like that.”

And in a more disappointing move, Alabama head coach Nick Saban backed up Kiffin’s statement, saying, “When we start using name, image and likeness for a kid to come to our school, that’s where I draw the line.” Well, if you’ll look back, Saban was actually the one who publicly advertised that his starting QB was bringing in close to a million dollars in NIL deals, so while he might not be going to some recruit’s house and saying, “here’s where the money is,” he’s not exactly being tight-lipped about the financial opportunities that his players have had with the Tide.

Quite frankly, it feels like the schools who got used to being on top of the pecking order are throwing a temper tantrum about a new tool getting added to the mix. Why not use NIL as a recruiting tool? It’s perfectly legal, it’s a great opportunity for the athletes, and, as Jimbo Fisher pointed out today, similar things have been going on under the table for a long time.

Where, you might be asking, is all of this contention coming from? It all stems from an unverified message board post claiming that A&M boosters are prepared to spend upwards of $25 million on NIL deals for incoming athletes, and that’s the reason why the Aggies ended up with the top recruiting class. Fisher denied the rumor, but might it have some truth behind it? Absolutely. If this were the case, is it completely legal and an available avenue to all schools in the NCAA? Absolutely.

So instead of complaining publicly about it, it’s unclear to me why the coaches to whom schools are paying millions of dollars a year aren’t just doing something about it. Go out and talk to the boosters. Wrangle up some money. You coach at Ole freaking Miss. You’re not the No. 1-valued program in the country, but you’re in the top 25, for Christ’s sake. And instead of changing with the times and doing your job, you’re going to begrudge these kids the chance to make some money? As Fisher himself said today: “irresponsible as hell.”