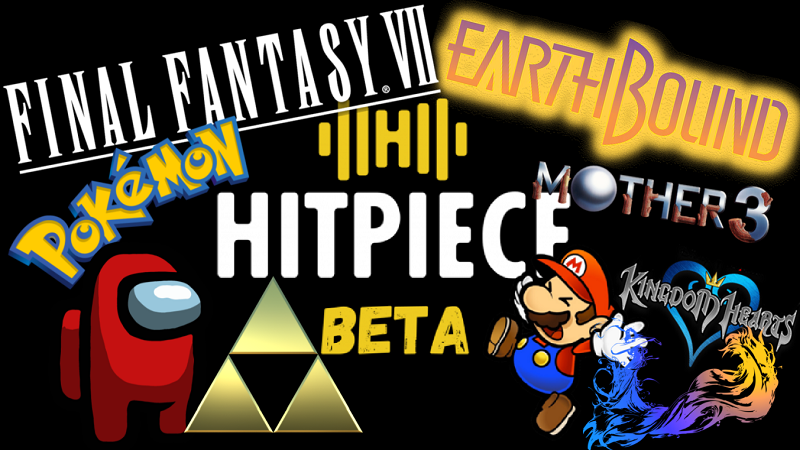 Update (9:14 PM PST): The website is now down, the main page stating “we started the conversation and we’re listening.”

Artists were surprised to learn today that their music had been minted and listed on the NFT marketplace HitPiece without their knowledge or permission, with plenty of gamers taking notice of their favorite titles’ soundtracks available for auction. The news comes as Nintendo issues 1,300+ DMCA takedown notices to YouTube channels that post game OSTs without express permission from the publisher.

So https://t.co/NbCAKrdQCh is down, but www dot hitpiece dot com is working.

I can’t tell if they’re trying to be sneaky, or if they just don’t know how to configure their website properly.

Either way, the front page is listing Disney and Nintendo copyright violations for sale. pic.twitter.com/F49rEzMzu7

“I can’t tell if they’re trying to be sneaky, or if they just don’t know how to configure their website properly,” observed YouTuber Radio Dead Air. “Either way, the front page is listing Disney and Nintendo copyright violations for sale.

“This is especially frustrating for us YouTubers, because if we use five seconds of a song in the far background of a video we get instantly demonetized, but these fuckers are infringing on THE ENTIRE MUSIC INDUSTRY and ain’t nobody at Amazon or GoDaddy doin’ shit.” they continued, in reference to the strict monetization rules leveled at content creators.

Twitter user NFT Thefts has collated the various tweets from artists and musicians who have found their works listed and minted without their permission, ranging from solo indie artists to massive corporations like Disney and Nintendo.

🚨 A new company called @joinhitpiece has started scraping music sites like Spotify and “staking” songs as NFTs without the original artist’s permission. 🚨

Check to see if your work is on here too https://t.co/jQaIDX2XxA

At the time of this writing, HeyPoorPlayer.com has found listings for multiple games and properties, including a variety of songs from the Mario and Zelda games, Pokemon animated series/movies OSTs, Final Fantasy VI, VII, X, XV, Kingdom Hearts, and others composed by Nobuo Uematsu and Yoko Shimomura, Earthbound, Mother 3, League of Legends, Ori, and even Among Us.

The website @joinhitpiece is garbage. Selling/hosting NFTs after doing a bot scrape of the entire Spotify catalog. So many affected. Absolutely no way I or publishers would endorse this

Ori + Halo + RK soundtracks up there for starters. A joke, take it down. Please signal boost pic.twitter.com/aXReVx2fQk

(Note: The links to these listings have been archived to preserve evidence)

Even artists who have remixed various songs from video game soundtracks are finding their inspired — yet original — works minted and listed without their permission.

NOOOOO THEY TURNED MY AMONG US REMIX INTO AN NFT LMFAOOOOOO pic.twitter.com/AfBin1kNIf

Initially, HitPiece replied to several artists who had discovered the unauthorized sales of their music, purporting that they were mistaken and asked them to resolve the matter privately. 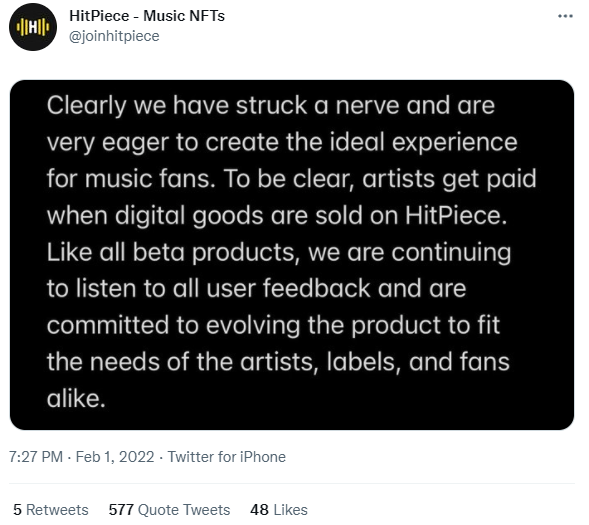 “Clearly we have struck a nerve and are very eager to create the ideal experience for music fans,” the image reads. “To be clear, artists get paid when digital goods are sold on HitPiece. Like all beta products, we are continuing to listen to all user feedback and are committed to evolving the product to fit the needs of artists, labels, and fans alike.”

The statement was ill-received, failing to address the unauthorized listings and offer transparency on who received money for the sales that already cleared.

According to Fortune, NFTs are non-fungible tokens, “which basically means that it’s a one-of-a-kind digital asset that belongs to you and you only. The most popular NFTs right now include artwork and music, but can also include videos and even tweets.” Although the most popular NFTs are seemingly images of monkeys or lions, the image itself is not the NFT, rather the URL listed on a blockchain. And while gaming NFTs are becoming an increasingly hot-button topic, the gamedev community has been consistently vocal about the amount of issues these assets would create if implemented.

A real-world example of an NFT would be the once popular certificates that state ownership of a specific star: a customer pays a fee to be listed as the owner of a star in a registry, despite the fact that the seller is not authorized or equipped to deliver the star, nor can the buyer do much with it.

Unlike stars, however, artists and corporations can sue platforms for unauthorized sales.

HeyPoorPlayer has reached out to Nintendo, Square Enix, Riot, and Innersloth for comment; article will be updated if a response is given.