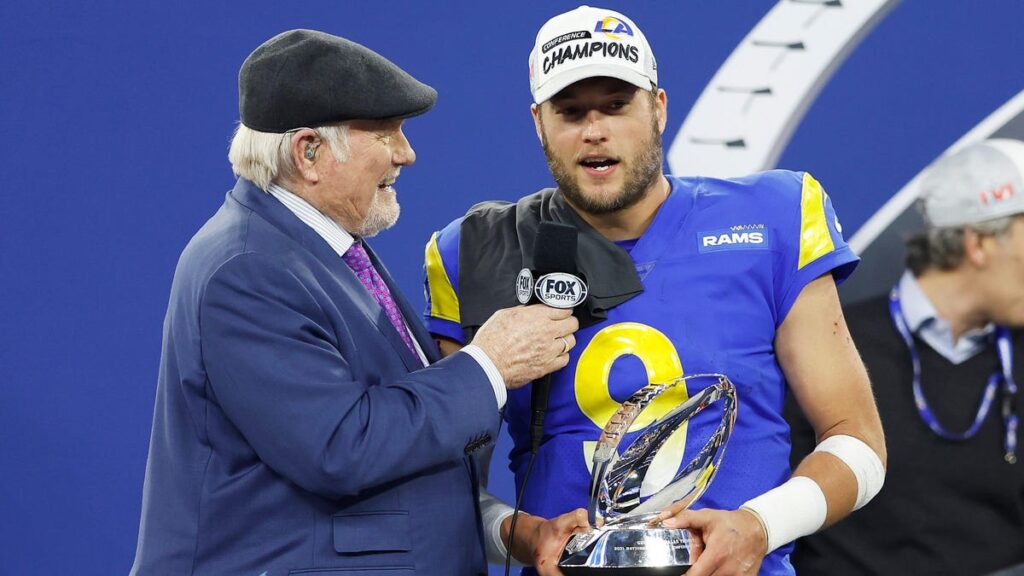 Shame on you, Detroit.

It’s bad enough that one of the greatest sports towns in America is going through it.

We get it. The Pistons are bad. The Lions were stinky this season. The Red Wings are a shell of their past Stanley Cup-winning selves. And the Tigers aren’t really close to winning that elusive World Series anytime soon.

Still, this city shouldn’t lose its pride or self respect to hero-worship a player that didn’t produce in Motown. And worse, wanted out and gave up on the organization and city that pulled for him for 12 seasons.

Matthew Stafford — who, remember, wanted a trade — doesn’t deserve the golden treatment many Detroit sports fans have thrown his way since the Los Angeles Rams beat the San Francisco 49ers in the NFC Championship Game to clinch a spot in the Super Bowl in L.A. on Feb. 13.

So-called Detroit fans celebrated as if the Lions were going to the Super Bowl.

For me, who worked in that great town for 20 years as a sports columnist, TV analyst, and sports-talk radio host — it was shockingly disappointing to see.

If the city wanted to actually throw a parade for Stafford, there would have been plenty of fans to line Woodward Ave. like it’s the annual Thanksgiving parade.

They flooded social media with messages of praise and admiration. A new baby wouldn’t have gotten so much play. They pulled out old pictures they’d taken with the QB to brag to their friends: “Hey, look at me and my boy Stafford.”

They burned up sports-talk radio, threw stones at the Lions, and proclaimed it wasn’t Stafford’s fault the team never won a playoff game when he was the starting quarterback. Nope. They blasted ownership and the coaches he had. And they ripped the other players who played with Stafford.

There were even T-shirts made that read: Detroit Rams.

For sure, it’s been a sad, pathetic party.

There’s no reason why you Detroiters have to stoop this low and act as if this city has never won anything.

The Bad Boy Pistons must have cringed. They won back-to-back titles when the whole NBA was against them and their style of play. Back then, it truly was Detroit vs. Everybody.

The 2004 Pistons was another team that had no business winning a title for your city. After all, the Los Angeles Lakers had FOUR future Hall of Famers on their squad and the Pistons had NO superstars. But Detroit won in the first five-game sweep in NBA Finals history. Yes, the Pistons should have won all five games. It wasn’t close.

Sure, it’s been awhile for your Tigers. But they won some memorable Fall Classics, including 1984 when they went wire-to-wire. The city was bonkers for them.

And the Wings have won 11 Stanley Cups. It’s why hockey fans all over the U.S. and Canada call your city Hockeytown.

Enter the Lions. We get the frustration. The Lions have won exactly ONE playoff game since 1957. And that was way back in 1992.

Still, celebrating Stafford because he joined a loaded team in Los Angeles is weak. Many of you are giving him all the credit for getting the Rams there.

The Rams went to the Super Bowl four years ago with your current QB Jared Goff. This isn’t new for L.A.

Instead of making up a false narrative, wiping away all blame from Stafford and his time in Detroit, fans should be pissed at Stafford when they look at Joe Burrow and the Cincinnati Bengals.

Stafford was supposed to do what Burrow has done in no time, turn a downtrodden organization into a winner. That’s what No. 1 overall picks are brought into do.

Stafford, a No. 1 overall pick, failed, going winless in three postseason games. Burrow is only in his second season and has the Bengals in the Super Bowl for the first time since 1989.

Yes, it’s not impossible to turn a franchise around when you get a real franchise quarterback.

There’s only one hope for phony Detroit fans rooting for Stafford and the Rams: Stafford loses two Sundays from now. It would be fitting if it came with a signature interception by Stafford to seal the deal for Cincy.

It would serve you turncoats right. Detroiters should only root for Detroit teams and players. Period.