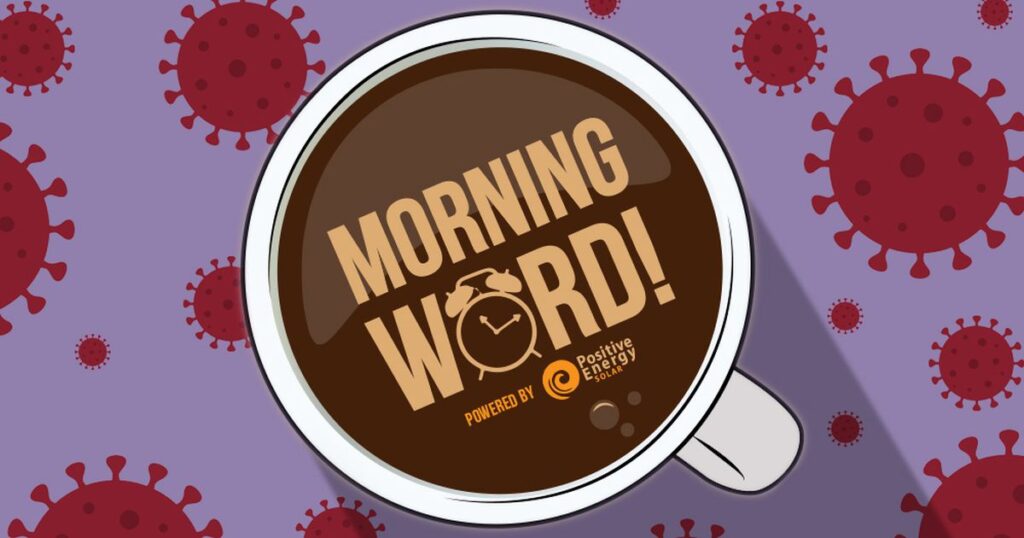 COVID-19 by the numbers

According to the state’s most recent vaccination case report from Jan. 3, over the last four weeks, 66.4% of COVID-19 cases have been among those who are not vaccinated, as have 83.6% of hospitalizations and 88.1% of deaths.

The state reported 37 additional deaths, 24 of them recent; there have now been 6,020 total fatalities statewide. As of yesterday, 518 people were hospitalized with COVID-19.

New Mexicans can register for a COVID-19 vaccine here, schedule a COVID-19 vaccine booster here and view a public calendar for vaccine availability here. Parents can add dependents to their vaccine profiles here. You can read the updated guidelines for quarantine and isolation here.

The federal government announced yesterday that starting Jan. 15, insurance companies and group health plans will be required to cover the cost of over-the-counter, at-home COVID-19 tests (eight per covered individual per month); you can read an FAQ about this development here. In a news release, the US Health and Human Services Department said it also is in the process of purchasing half a billion at-home COVID tests that will be available for free via a forthcoming website.

You can read all of SFR’s COVID-19 coverage here.

Medical officials from Presbyterian Healthcare Services and University of New Mexico Health yesterday said people should avoid emergency rooms unless they are “very sick.” In a news conference Monday morning, Emergency physician Steve McLaughlin, chair of UNM’s Department of Emergency Medicine, said the rapid rise of cases in New Mexico fueled by the Omicron variant “on top our already full hospitals” means “we’re in a situation where we’re pretty overwhelmed with sick patients and in the next couple of weeks, we expect this is going to get worse.” In a news conference last week, Acting Health Secretary Dr. David Scrase said officials believe Omicron already accounts for approximately 50% to 60% of New Mexico’s cases (the state is able to calculate the presence of the variant through PCR diagnostics in advance of its genomic sequencing, which has several weeks delay and only sequences small samples).With the rapid growth of cases and hospitals already operating under crisis standards of care, people showing up to emergency rooms will have extended wait times and treatment “may be taking place in an alternative space, such as hallway, a waiting room or in a chair,” McLaughlin said. Both he and Presbyterian Chief Medical Officer Jason Mitchell urged people to seek care elsewhere, such as through a primary physician or the virtual visits Presbyterian offers online. Their emergency rooms won’t be providing COVID tests for people with mild symptoms. “We really are in a public health crisis,” Mitchell said, “and we are asking for the public’s help right now. We need your help going to the right place at the right time. If you are truly really sick and having trouble breathing, having chest pains, please come to our emergency rooms.” Both doctors also urged the public to get vaccinated and boosted, noting that the “vast majority” of their COVID patients requiring hospitalization have not been vaccinated. Even if Omicron ends up causing less severe illness as is hoped, “once you get so many thousands of people ill at once,” Mitchell said, “it will continue to overwhelm us.” Both doctors said people should upgrade their cloth masks to N95 and K95 masks to ward off the highly transmissible variants.

In Santa Fe, Arturo Delgado, director of marketing, communications and public relations for Christus St. Vincent Regional Medical Center, said in an emailed response to questions from SFR that “like other hospitals in New Mexico and across the country,” Christus “is experiencing an increased number of patients in our ER who are presenting with mild to moderate Covid symptoms. In these cases, we are unable to administer Covid tests unless there is a medical concern. We strongly encourage anyone who is experiencing mild to moderate symptoms to contact their primary care provider for guidance and treatment.” While Christus isn’t “experiencing overcrowding in our ER at this time, wait times have increased due to the number of patients we are caring for. We ask that only those experiencing a medical emergency come to the ER for treatment or call 911.”

Advocates for creating an “affirmative consent standard” for New Mexico schools want Gov. Michelle Lujan Grisham to add the issue to the legislative session that begins Jan. 18 (in the 30-day financial session, other topics require the governor’s approval for legislative action; the governor’s spokeswoman says the office is still reviewing and evaluating for the upcoming session legislation). A coalition that includes the New Mexico Coalition of Sexual Assault Programs, the American Civil Liberties Union of New Mexico, Valencia Shelter Services and 13th Judicial District Attorney Barbara Romo also want the Legislature to allocate $5 million more to fund services for victims of sexual assault, which currently has approximately $4 million in funding. State Rep. Liz Thomson, D-Albuquerque, has pre-filed the affirmative consent bill—comparable to a prior bill she introduced that passed the House but stalled out in the Senate. The NM Coalition for Sexual Assault has online petitions urging the governor to add affirmative consent legislation to the call and in support of the additional funding. According to NMCSA, lack of funding for sexual assault services and the lack of a statewide hotline means “survivors across our state,” particularly those in rural areas, can end up driving as many as three hours to receive care. “Other survivors are queued in a waitlist that can take 12 months to be seen. And for sexual assault nurse examiners, the result of insufficient funding results in them baring the cost to perform services out of their own pockets.”

The National Education Association-Santa Fe wants Santa Fe Public Schools to consider shifting to a four-day in-person week and leave Fridays for online asynchronous learning. The union made the request in a letter to Superintendent Hilario “Larry” Chavez and the school board, citing high rates of teacher absences coupled with low availability of substitutes resulting in some cases in unsafe overcrowded classrooms that “violates the District’s commitment to provide a safe workplace for all employees and students.” Chavez tells the Santa Fe New Mexican he met with the union yesterday and they are discussing options. In the week since students returned to school, SFPS reports 77 new COVID-19 cases, of which approximately 73% were among students. Monte del Sol Charter School and Santa Fe Indian School have already opted for temporary remote learning due to high case numbers, where New Mexico School for the Arts canceled classes on Friday and had 73 student absences yesterday.

Only time will tell how history treats the COVID-19 pandemic, but state historian Robert Martínez contends “we are living through history right now as we speak.” Martínez provides a historical context for New Mexico’s experiences with diseases in the most recent episode of ¡COLORES! from New Mexico PBS, sharing historical incidences of epidemics throughout time, and the ways in which they played out here. One case in point he notes is a disease that hit the Zuni Pueblo in 1728, killing about 200 people. “The local people told the priest they wanted to bury their people according to their own ancient rights,” Martínez says, “so we also get an insight into the cultural exchanges.”

For Santa Feans looking to add sustainability goals in the new year, Santa Fe County’s Sustainability Office has numerous suggestions, including planning waste-free meals; creating a personal-waste inventory; and upping your recycling game. Those suggestions—and more—can be found in the office’s January newsletter. County Sustainability Manager Jacqueline Beam offers another: Plant a tree in the right place, such as a backyard that already has irrigation. “A tree a year will cover the average gas emissions a person creates,” Beam says, “and so just simple things like that, thinking of ways you can counter your footprint feels a lot more empowering.” The office is gearing up to present a plan for reducing greenhouse gas emissions for county facilities and operations to the Board of County Commissioners on Jan. 25, and is in the process of inventorying countywide emissions in service of a forthcoming climate action plan. While the Sustainability Office has many initiatives, Beam’s favorite, she says, is its 30×30 efforts (part of a national initiative to save 30% of the country’s land and water by 2030). For its part, Santa Fe County and more than 150 volunteers planted nearly 1,500 trees and shrubs across the county as part of its Earth Day events, with an eye toward helping ward off soil erosion and increase shade. “I feel like that’s an area where all as a community can come together and work together,” Beam tells SFR. “It’s low hanging fruit, but yet the reward is incredible.”

In his new book, The End of Burnout, author Jonathan Malesic tackles a topic with increasing relevance as The Great Resignation continues in the US: burnout. As part of his reporting, Malesic tells Slate magazine he wanted “to get as far away from burnout culture as I could without leaving the country.” He ended up at the Monastery of Christ in the Desert near Abiquiu and devotes a chapter of the book to Benedictine religious. Malesic describes the community in Northern New Mexico as slightly unusual among Benedictine communities in that the 60 monks there aim to “live the life that St. Benedict prescribes in his rule from the early sixth century,” while also living in the 21st century with modern pursuits, such as brewing beer, maintaining a newsletter and, in the ‘90s, building websites as part of their income stream. “I guess the takeaway for the secular workers would be that one thing the monks do is that they put something other than work first,” Malesic tells Slate. “Their working lives exist to serve a different end. The top priority is the five or six hours a day that they spend in communal prayer, very slowly and methodically chanting these prayers and psalms that monks and sisters have been chanting in the same order for fifteen centuries.” They also “honor each other’s dignity,” he notes, “They put a great emphasis on upholding and preserving the community and trying to live together. That, too, means that you can’t say, ‘Hey, Brother, you’ve really got to put in another ten hours on whatever project.’”

The National Weather Service forecasts today’s high near 46 degrees; expect sun and a northwest wind around 15 mph. If you’re wondering when we might see precipitation again, there’s a slight chance for it Friday night.

Thanks for reading! IndieWire Film Critic David Ehrlich’s video countdown of last year’s best movies has inspired The Word to catch up on her movie watching.