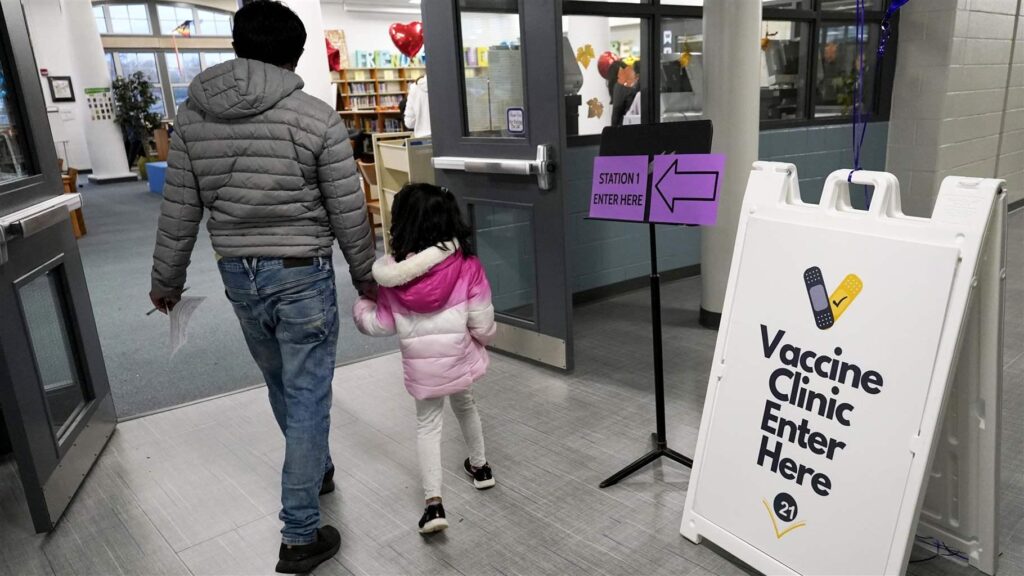 In the coming weeks, scientists will have many more answers regarding omicron, the new COVID-19 variant that has quickly engulfed South Africa and spread across the globe, including the United States.

Is omicron more transmissible than delta? Does it cause more severe disease? Is it more resistant to vaccines or anti-viral treatments? Does it cause symptoms doctors haven’t seen before? Are certain people more vulnerable?

No matter the answers to those questions, there is little appetite in either red or blue states for reimposing lockdowns or mask mandates. That reluctance reflects a recognition of the public’s exhaustion after 21 months, the wide availability of vaccines and an aversion to deepening the ferocious polarization that has been the hallmark of the public health emergency.

As Dr. Karen Landers, a health officer with the Alabama Department of Public Health, put it, “We may be through with COVID even if it’s not through with us.”

To counter the spread of omicron in the United Kingdom, British Prime Minister Boris Johnson this week announced new masking rules for most indoor public places and a requirement that people show a vaccine pass to get into nightclubs and sports stadiums. In Italy, many public activities will be off-limits starting Monday to anyone without a COVID Super Green Pass, which shows proof of vaccination, or recovery from the virus within the past six months. In Belgium, schools will close for Christmas one week early.

But here in the United States, most state and local public health authorities are forgoing new mandates and closures in favor of the advice they have offered throughout the pandemic: Keep your distance, wear a mask in public settings, get tested if you think you’ve been exposed, and get vaccinated and boosted.

“We know viruses will mutate and SARS-CoV-2 is no different, as we saw before with delta,” said Landers. “The core preventive measures haven’t changed. We’re going to continue to apply the same standards that we have for the last two years.”

How Baltimore Escaped the Worst of COVID-19


Public health authorities across the country have echoed that message since omicron first appeared late last month. During this “hurry-up-and-wait” period, as one public health official called it, the advice has been to adhere to the guidance everyone has grown accustomed to hearing.

“While we don’t know much about omicron, we do know a lot about mitigation efforts that work against COVID in general,” said Baltimore’s health commissioner, Dr. Letitia Dzirasa. “Masking, distancing, avoid crowding, and we know vaccinations reduce the risk of hospitalization and death. These are things we do that we need to continue to do.”

Still, the appearance of new variants could trigger the return of some minimally disruptive actions, Dzirasa added. In August, as the delta variant fueled a new surge, Baltimore reimposed an indoor mask mandate a month after the city had lifted that requirement in response to a lull in cases. Omicron, she said, could prompt similar policy recalibrations.

Although it didn’t mention omicron, New Mexico last week became the first state to say that its COVID-19 vaccine requirement for certain workers must now include a booster shot. Six Democratic-led states—Hawaii, Illinois, Nevada, New Mexico, Oregon and Washington—and several counties and cities continue to require most people to wear masks in indoor public places, regardless of their vaccination status.

For now, most U.S. public health authorities aren’t suggesting the more stringent measures that countries in Europe and elsewhere have instituted as omicron has circled the globe. Landers, in Alabama, for example, dismissed the possibility that the state would impose a mask requirement, which it lifted in April.

“Our governor has not indicated that masking requirements is something that is going to happen again,” she said. She later wrote in an email, “Given that some persons do not comply with mandates, this makes mandates less effective.”

Any decisions about reimposition of mask mandates in response to omicron must take into consideration how COVID-19 is presently spreading, Nirav Shah, director of the Maine Center for Disease Control and Prevention and current president of the Association of State and Territorial Health Officials, said at a news conference earlier this month. In Maine, he said, transmission is mainly occurring in private rather than public settings.

Shah also questioned the ability of public health officials to enforce any mandates. “In the summer of 2020, many states had the wherewithal to do right, but now, given the other operations that are on the table, enforcement becomes an even bigger [issue] given staffing,” he said.


At a news conference on the day New York announced detection of its first cases of omicron, Dec. 2, Democratic Gov. Kathy Hochul declared she had no intention of ordering a lockdown of any kind, which she said would cause panic.

“I’m not prepared to shut down schools or the economy right now,” she said. “That would be considered an overreaction.” She emphasized that the situation was very different from the spring of 2020, when the state did mandate a shutdown, primarily because vaccines are available now.

She noted, however, that should omicron dramatically worsen the pandemic’s trajectory, “All the tools are out there, and I can deploy them with a word.”

After omicron appeared, New York City imposed a vaccine requirement on private businesses. While the state hasn’t done so, Hochul did take several actions related to the new variant.

She said she would deploy National Guard troops trained in health care to understaffed nursing homes. The goal is to enable crowded hospitals, particular in upstate New York, to free up beds by discharging older patients to long-term care facilities.

In her emergency order, Hochul also required hospitals that are 90% full to cease elective surgeries to make way for COVID-19 patients and others whose conditions require immediate medical attention. She estimated her order would apply to about 50 hospitals in the state.

She also announced deployment of more pop-up vaccine sites around the state and the disbursement of a million more COVID-19 tests, particularly at schools.

Michigan, in its third fierce COVID-19 surge, with hospitalizations up, is preparing for omicron by again emphasizing tests and getting them to vulnerable populations, such as those experiencing homelessness, said Dr. Alexis Travis, a senior deputy director in the Public Health Administration of the state’s Department of Health and Human Services.

Positive tests should lead to the quarantining of those infected and identification of others exposed to that person. Michigan, like many states, has provided shelters where those experiencing homelessness can be quarantined if infected. Travis said the state also is planning to increase contact tracing.

While Michigan has no plans to impose restrictions such as indoor mask requirements, Travis said those steps are not off the table should omicron turbo-charge the current surge. “With large gatherings like concerts and sporting events, we may look at whether they should be held remotely or postponed or placing limitations on people who have not been vaccinated,” she said.

To the extent public health agencies are mentioning omicron in their public messaging, it is to motivate the unvaccinated to get their shots and others to get boosted.

“The single most important thing you can do to maintain your immunity against this virus and its variants is to get the booster shot,” Maryland Republican Gov. Larry Hogan said in a public message late last month. “Throughout this entire year, we have repeatedly stressed that we are in a race between the vaccines and the variants.”

During the early days of omicron, public health agencies said they have seen an increase in vaccinations, particularly for boosters.


In that regard, Kelly Wroblewski, director of infectious diseases at the Association of Public Health Laboratories, said the states and the country are in better shape than they were a year ago as other variants started to appear.

Thanks to increased federal support, most state and local public laboratories now can track omicron using genomic sequencing. U.S. labs are sequencing between 5% and 10% of all positive cases, Wroblewski said, which should be sufficient, provided those samples capture the diverse demographics of the country.

“Compared to where we were a year ago, I think it’s remarkable the strides we made,” she said.

Will Omicron Be Different?

The lab results and real-world experience will reveal much about omicron in the coming weeks. Delta proved twice as contagious as previous variants and has been associated with more severe illness, but public health officials say those characteristics changed public health guidance only in degree, not kind. So, for instance, some jurisdictions, such as Baltimore, imposed mask restrictions to counter delta’s greater transmissibility, which became apparent as cases climbed.

But delta largely prompted the same public health measures that had been promoted before: masking, social distancing, testing, quarantining and handwashing. “With delta, the strategies didn’t change because the characteristics and traits were largely the same as the previous variants,” said James Blumenstock, senior vice president for pandemic response and recovery at the Association of State and Territorial Health Officials.

But what was true in the past won’t necessarily be true as the virus keeps mutating.

“We know certain strains could impact different types of people differently,” said Janet Hamilton, an epidemiologist and executive director of the Council of State and Territorial Epidemiologists. “It could be that younger individuals are more likely to have certain types of outcomes than older ones with different strains.”

She pointed to the variation among influenza strains. “We know for example H3N2 was much worse for older people, but the young were more likely to be infected with H1N1.”

Even as local and state public health officials await more definitive information about omicron, they are exhausted by the past 21 months. They have faced unprecedented hostility and resistance, from both ordinary people and politicians, which has prompted many of their colleagues to leave their jobs. And now, with omicron, they will be asked to rise to the occasion again.

“We have folks who have just been working nonstop for almost two years on the hardest public health challenge they’ve ever had to work on, and that has gotten more polarized and politicized as we’ve gone on,” said Adriane Casalotti, chief of public and government affairs for the National Association of County and City Health Officials.

“It’s like a marathon where you don’t how long it is. Every time you think you see the finish line it disappears and moves somewhere else.”